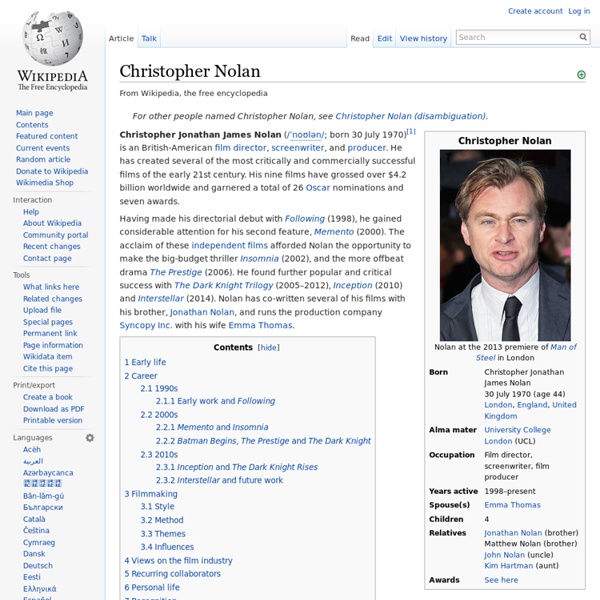 Christopher Jonathan James Nolan (/ˈnoʊlən/; born 30 July 1970)[1] is an British-American film director, screenwriter, and producer. He has created several of the most critically and commercially successful films of the early 21st century. His nine films have grossed over $4.2 billion worldwide and garnered a total of 26 Oscar nominations and seven awards. Early life[edit] Nolan was born in London. His British father, Brendan James Nolan, was an advertising executive,[3] and his American mother, Christina (née Jensen), worked as a flight attendant and English teacher.[4][5][6] His childhood was split between London and Chicago, and he has both British and American citizenship.[7][8] He has an older brother, Matthew, and a younger brother, Jonathan.[9] Nolan began making films at age seven, borrowing his father's Super 8 camera and shooting short films with his action figures.[10][11] From the age of 11, he aspired to be a professional filmmaker.[9] Career[edit] 1990s[edit] 2000s[edit] Related:  M-Z

Steve McQueen (director) McQueen was born in London and is of Grenadian[9] descent.[10][11] He grew up in Hanwell, West London and went to Drayton Manor High School.[12][13] In a 2014 interview, McQueen stated that he had a very bad experience in school, where he had been placed into a class for students believed best suited "for manual labour, more plumbers and builders, stuff like that." Later, the new head of the school would admit that there had been "institutional" racism at the time. McQueen added that he was dyslexic and had to wear an eyepatch due to a lazy eye, and reflected this may be why he was "put to one side very quickly".[11] He was a keen football player, turning out for the St. Bear (1993) was McQueen's first major film, presented at the Royal College of Art in London. Five Easy Pieces (1995) is a short film by McQueen. Just Above My Head (1996) is a short film which shares close ties with McQueen's preceding film with the key theme of walking. Brockington, Horace.

David O. Russell Three of Russell's most recent films were critically acclaimed and commercial hits: The Fighter (2010), Silver Linings Playbook (2012), and American Hustle (2013). These films have earned Russell three Academy Award nominations for Best Director, as well as a Best Adapted Screenplay nomination for Silver Linings Playbook and a Best Original Screenplay nomination for American Hustle. Early life[edit] Russell was born in New York City to Maria (née Muzio) and Bernard (Markovski)[1][2][3] Russell. Russell received his A.B. degree from Amherst College, where he majored in English and Politics, in 1981.[4][19] He wrote his senior thesis on the United States intervention in Chile from 1963 to 1973.[20] Career[edit] Early career[edit] Russell directed a documentary about Panamanian immigrants in Boston,[23] which led to a job as a production assistant on a PBS series called Smithsonian World.[8] Spanking the Monkey[edit] Flirting with Disaster[edit] Three Kings[edit] I Heart Huckabees[edit]

Paul Schrader Schrader's upbringing and critical writing[edit] Schrader was born in Grand Rapids, Michigan, the son of Joan (née Fisher) and Charles A. Schrader, an executive.[1] Schrader's family practiced in the Calvinist Christian Reformed Church,[2][3] and his early life was based upon the religion's strict principles and parental education. He did not see a film until he was seventeen years old, and was able to sneak away from home. In an interview he stated that The Absent-Minded Professor was the first film he saw. The September–October 2006 issue of Film Comment magazine published his essay Canon Fodder which attempted to establish criteria for judging film masterworks. Other film-makers who made a lasting impression on Schrader are John Ford, Jean Renoir, Roberto Rossellini, Alfred Hitchcock and Sam Peckinpah. Film career[edit] In 1999, Schrader received the Laurel Award for Screenwriting Achievement from the Writers Guild of America. Theatre career[edit] Themes[edit] Filmography[edit]

Otto Preminger Otto Ludwig Preminger (5 December 1905 – 23 April 1986) was an Austrian American theatre and film director. Early life[edit] My father believed that it was impossible to be too kind or too loving to a child. He never punished me. After the assassination in 1914 of Archduke Franz Ferdinand, the heir to the throne, which led to the Great War, Russia entered the war on the Serbian side. After a year in Graz, the decisive public prosecutor was summoned to Vienna, where he was offered an eminent position, roughly equivalent to that of the United States Attorney General. Career[edit] Theater[edit] As the war came to an end, Markus formed his own law practice. Preminger explained to his father that a career in theater was not just a ploy to excuse himself from school. Reinhardt may have had reservations about Preminger's acting but he quickly detected the young man's abilities as an administrator. Hollywood[edit] Sam Spiegel accompanied Preminger from Vienna to Paris by train. Laura[edit]

Agnès Varda Agnès Varda (born 30 May 1928) is a French film director and professor at the European Graduate School.[1] Her films, photographs, and art installations focus on documentary realism, feminist issues, and social commentary — with a distinct experimental style. Early life[edit] Varda was born Arlette Varda in Ixelles (Brussels), Belgium, the daughter of Christiane (née Pasquet) and Eugène Jean Varda, an engineer on May 30, 1928.[2] Her mother was French and her father came from a family of Greek refugees from Asia Minor. When she was a teenager, she escaped Belgium in 1940 and fled to Sète, France to live with the rest of her family. Personal life[edit] While living in Paris, she met her husband, Jacques Demy. Varda was one of the five people to attend Jim Morrison's burial in 1971 in Paris at the Père Lachaise Cemetery. Varda's handprints at Cannes Professional life[edit] Agnès Varda is a significant figure in modern French cinema. Involvement in the French New Wave[edit] Style[edit]

Billy Wilder Billy Wilder (/ˈwaɪldər/; German: [ˈvɪldɐ]; June 22, 1906[1] – March 27, 2002) was an Austrian-born American filmmaker, screenwriter, producer, artist and journalist, whose career spanned more than 50 years and 60 films. He is regarded as one of the most brilliant and versatile filmmakers of Hollywood's golden age. Wilder is one of only five people to have won Academy Awards as producer, director and screenwriter for the same film (The Apartment), and was the first person to accomplish this.[2] Life and career[edit] Austria and Germany[edit] Born Samuel Wilder to a Jewish family in Sucha Beskidzka, Austria-Hungary (it was the part of Poland that had been subjugated to the Austria-Hungary empire following the eighteenth-century partitions of the Polish-Lithuanian Commonwealth and after the end of WWI Poland again) to Max and Eugenia (née Dittler) Wilder, he was nicknamed Billie by his mother (he changed that to "Billy" after arriving in America). Hollywood career[edit]

Jean-Pierre Melville Jean-Pierre Melville (born Jean-Pierre Grumbach; 20 October 1917 – 2 August 1973) was a French filmmaker. While with the French Resistance during World War II, he adopted the nom de guerre Melville as a tribute to his favorite American author, Herman Melville.[1] He kept it as his stage name once the war was over. Life and career[edit] Jean-Pierre Grumbach was born in 1917 in Paris, France, the son of Berthe and Jules Grumbach.[2] His family were Alsatian Jews. After the fall of France in 1940 during World War II, Grumbach entered the French Resistance to oppose the German Nazis who occupied the country. When he returned from the war, he applied for a license to become an assistant director, but was refused. He became well known for his tragic, minimalist film noir crime dramas, such as Le Doulos (1962), Le Samouraï (1967) and Le Cercle rouge (1969), starring major actors such as Alain Delon (probably the definitive "Melvillian" actor), Jean-Paul Belmondo and Lino Ventura. As actor[edit]

Roman Polanski Roman Polanski (born Rajmund Roman Thierry Polański; 18 August 1933) is a Polish and, since 1976, naturalized-French[1] film director, producer, writer, and actor. Having made films in Poland, the United Kingdom, France and the United States, he is considered one of the few "truly international filmmakers."[2] Polanski's films have inspired diverse directors, including the Coen brothers,[3] Wes Anderson,[4] David Fincher,[5] Atom Egoyan,[6] Darren Aronofsky,[7] Park Chan-wook,[8] Sean Durkin,[9] Abel Ferrara,[10] and Wes Craven.[11] Early life World War II I had just been visiting my grandmother ... when I received a foretaste of things to come. As he roamed the countryside trying to survive in a Poland now occupied by German troops, he witnessed many horrors, such as being "forced to take part in a cruel and sadistic game in which German soldiers took shots at him for target practice After the war After the war he was reunited with his father, and moved back to Kraków. Film director 1960s

George A. Romero Life and career[edit] Romero was born in New York City borough of The Bronx, to a Cuban-born father of Spanish parentage and a Lithuanian American mother.[2] His father has been reported as born in A Coruña with his family coming from the Galician town of Neda,[3][4] although George A. Romero once described his father as of Castilian descent.[5] His father worked as a commercial artist.[6] Romero attended Pittsburgh's Carnegie Mellon University. After graduating in 1960,[7] he began his career shooting short films and commercials. One of his early commercial films, a segment for Mister Rogers' Neighborhood in which Mr. Rogers underwent a tonsillectomy,[8] inspired Romero to go into the horror film business. "It was the filmmaking, the fantasy, the fact that it was a fantasy and it had a few frightening, sort of bizarre things in it. Romero, who lives in Toronto, filmed a fourth "Dead" movie in that city titled Land of the Dead. Personal life[edit] Influences[edit] Filmography[edit]

Alan J. Pakula Career[edit] In 1971, Pakula released the first installment of what would informally come to be known as his "paranoia trilogy". Klute, the story of a relationship between a private eye (played by Donald Sutherland) and a call girl (played by Jane Fonda, who won an Oscar for her performance), was a commercial and critical success. This was followed in 1974 by The Parallax View starring Warren Beatty, a labyrinthine post-Watergate thriller involving political assassinations. The film has been noted for its experimental use of hypnotic imagery in a celebrated film-within-a-film sequence in which the protagonist is inducted into the Parallax Corporation, whose main, albeit non-ostensible, enterprise is domestic terrorism. Personal life[edit] Pakula was born in The Bronx, New York to parents of Polish Jewish descent, Jeanette (née Goldstein) and Paul Pakula.[3] He was educated at The Hill School, Pottstown, PA and Yale University, where he majored in drama. Death[edit] Filmography[edit]

Jacques Tati Jacques Tati (born Jacques Tatischeff, 9 October 1907 in Le Pecq, Yvelines, France – died 5 November 1982)[1] was a French filmmaker. Throughout his long career, he worked as a comic actor, writer, and director. In a poll conducted by Entertainment Weekly of the Greatest Movie Directors, Tati was voted the 46th greatest of all time. Family origins[edit] Jacques Tati was born French with Russian, Dutch and Italian ancestry. Under suspicious circumstances Dmitri Tatischeff died from injuries sustained in a horse riding accident shortly after the birth of George Emmanuel. Childhood and youth[edit] Jacques Tatischeff appears to have been an indifferent student, yet excelled in the sports of tennis and horseback riding. Between 1931 and 1932 the global economic crisis reached France[8] at the same time he left both the Racing Club de France and, to his family's disapproval, his apprenticeship at Cadres Van Hoof. Entertainment debut[edit] World War II[edit] Jacques Tati, Director[edit]