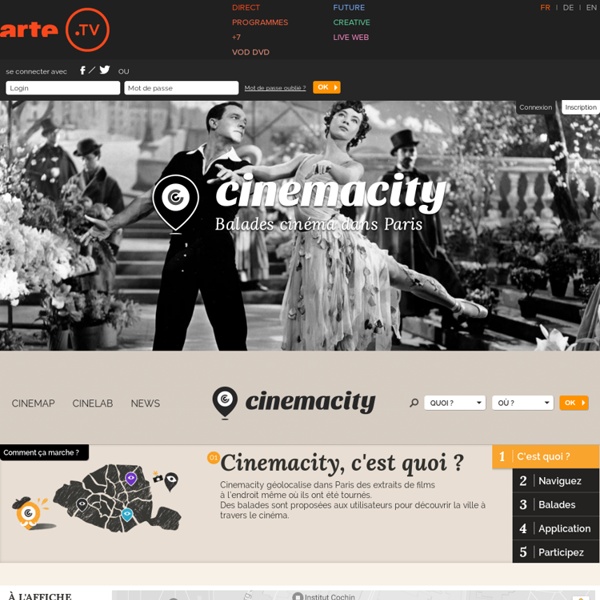 The 100% Easy-2-Read Standard by Oliver Reichenstein Most websites are crammed with small text that’s a pain to read. Why? There is no reason for squeezing so much information onto the screen. It’s just a stupid collective mistake that dates back to a time when screens were really, really small. 700 Films libres de droits :films classiques, indépendants, polar, westerns,.. Watch 4,000+ movies free online. Includes classics, indies, film noir, documentaries and other films, created by some of our greatest actors, actresses and directors. The collection is divided into the following categories: Comedy & Drama; Film Noir, Horror & Hitchcock; Westerns (many with John Wayne); Martial Arts Movies; Silent Films; Documentaries, and Animation.

Why is Simple so Difficult? by Oliver Reichenstein Simple websites are easy to use, easy to understand, nice to look at. In practice, websites are either unusable or ugly and in general filled with too many complicated words. Why do designers have such a hard time to keep it simple? Simplicity as a result of a creative process is “the ultimate sophistication”, as Leonardo da Vinci (1452-1519) said. Achieving simplicity is a difficult task not only in web-design but in every discipline (art, business, sports, science…), yet simplicity for websites is a particular challenge as paper derived graphic design and usability on one side, marketing language and user expectations on the other side are in constant struggle with each-other. OBLIVION GFX - .work Info: The mighty Joseph Kosinski invited Munkowitz to the GFX party once again, this time for his spring blockbuster feature film JOE-BLIVION… Predictably, the list of graphic assets to be created was obscene, so munko assembled and led another super team of GFX mercenaries and descended into the lovely confines of Crater Lake Productions to generate the aforementioned fuckload of graphic content… Working with Joseph always brings out the best in Munk and Company, and this time around was certainly no exception… OBLIVION © Universal Pictures, Inc. All Rights Reserved. The team also designed all of the Machinery HUDs and various Gauges in the film, be it the Drone Machine Vision, Jack's Gun HUD, all the Scav equipment and some of Jack's smaller vehicles...

Jayse Hansen/The Avengers - VFX Inspiration + Iron Man HUD Tutorials The Avengers is ™ & © 2012 Marvel and Subs. With the recent release of The Avengers on Blu-ray, now seems like a good time to revisit the amazing screen graphics & HUD design of Jayse Hansen. In case you didn’t know, Jayse along with Cantina Creative were responsible for the amazing glass screen interface designs seen on the Helicarrier in The Avengers, plus the futuristic Iron Man HUD (Heads Up Display) and several other FUIs (Fake User Interfaces).

BOX DEMO - .work Info: While collaborating with the geniuses at Bot & Dolly in beautiful San Francisco, Munkowitz was tasked to Design Direct a truly unique piece called BOX.. The piece was originally supposed to function as a Technology Demo, but Munkowitz and the team quickly realized it's visual potential and transformed it into a Design and Performance Piece… The resulting short film is a one-of-a-kind visual and technological achievement due to the very special combination of talent and gear behind the doors of the B&D facility... The piece was essentially grounded on the principles of Stage Magic, invoking five of the basic categorizations of Illusionary.. These Categories greatly informed the conceptual and aesthetic foundation and were fused with a graphic design aesthetic heavy in Minimalistic Form and Illuminated Geometry.. Any sufficiently advanced technology is indistinguishable from magic.

Google Visual Assets Guidelines - Part 2 on Behance Google’s brand is shaped in many ways; one of which is through maintaining the visual coherence of our visual assets. In January 2012, expanding on the new iconography style started by Creative Lab, we began creating this solid, yet flexible, set of guidelines that have been helping Google’s designers and vendors to produce high quality work that helps strengthen Google’s identity. What you see here is a visual summary of the guidelines, divided into two Behance projects:

MyFocus. Digital & Physical Work Distractions-CONTROLLED by CanFocus So you know the drill...you've hunkered down at 2pm to get this critical email/report/contract done by 5pm...and its somehow 415pm and EVERYONE and EVERYTHING has been distracting your attention away from it. There are fewer and fewer barriers to the invasion of your physical space and time by colleagues. Workspace layouts are trending towards more open-concept. More noise! more interruptions! Is it fair that you are constantly interrupted at work and getting little done, but then have to finish this thing at 10pm every night at home? Flat UI and Forms This article is about two important four-letter words that start with “F”: “flat” and “form.” Article Continues Below Though some decry flat user interfaces as pure fashion, or the obvious response to skeuomorphic trends, many designers have embraced the flat approach because the reduction in visual styling (such as gradients, drop shadows, and borders) creates interfaces that seem simpler and cleaner. The problem is that most flat UIs are built with a focus on the provision of content, with transactional components (i.e., forms) receiving very little attention.

9 Rules For Running A Productive Design Critique Four people crowd around a 27-inch monitor, peering at a design mockup. First developer: “Are you nuts? We can’t build all that for the next release.” Second developer: “Have some vision, man! This is for next year. Device Fatigue X: Hey Brad, what kind of phone/tablet/e-reader/laptop/net-book/doodad should I get?Me: I don’t know.X: C’mon, you do this stuff for a living! Surely you know all about the latest gizmos, right?Me: I honestly have no idea.X: Thanks for nothing, asshole. Keeping up with the device landscape is a full-time job. I take my dog outside to poop only to come back and find that 17 new Android devices have been released.