The Top 10 Relationship Words That Aren't Translatable Into English 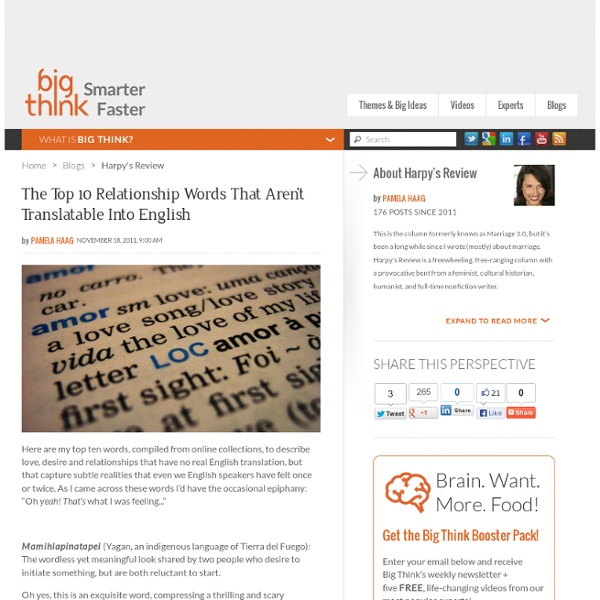 Here are my top ten words, compiled from online collections, to describe love, desire and relationships that have no real English translation, but that capture subtle realities that even we English speakers have felt once or twice. As I came across these words I’d have the occasional epiphany: “Oh yeah! That’s what I was feeling...” Mamihlapinatapei (Yagan, an indigenous language of Tierra del Fuego): The wordless yet meaningful look shared by two people who desire to initiate something, but are both reluctant to start. Oh yes, this is an exquisite word, compressing a thrilling and scary relationship moment. It’s that delicious, cusp-y moment of imminent seduction. Yuanfen (Chinese): A relationship by fate or destiny. From what I glean, in common usage yuanfen means the "binding force" that links two people together in any relationship. But interestingly, “fate” isn’t the same thing as “destiny.” Retrouvailles (French): The happiness of meeting again after a long time.

Fairy Tales Can Come True Here's a "photo story" based on the book, Fairy Tales Can Come True (Just Not Every Day!), published by Shake It! Books. You'll have a few giggles... and learn a few things as well! Incredible Wildlife Photography Wildlife — By Stephanie on January 11, 2010 at 10:58 am Canada goose protects her young Ever have one of those moments when you think to yourself, “Boy, I wish I had my camera?!” The Prettiest Little Monster - Tattoos I Love Go to mobile version LiveJournal You are viewing 's journal Why Consensual Sex Can Still Be Bad Sex on Campus Why sex that’s consensual can still be bad. And why we’re not talking about it. Photograph by Andrew Lyman SCAD class of 2016 Last winter, Reina Gattuso was a Harvard senior majoring in literature and gender studies and writing a biweekly column for the college newspaper, the Crimson.

The Atlas of Endangered Alphabets: A Free Online Atlas That Helps Preserve Writing Systems That May Soon Disappear The United Nations, as you may or may not know, has designated 2019 the Year of Indigenous Languages. By fortunate coincidence, this year also happens to mark the tenth anniversary of the Endangered Alphabets Project. In 2009, its founder writes, "times were dark for indigenous and minority cultures." Television and the internet had driven "a kind of cultural imperialism into every corner of the world. Everyone had a screen or wanted a screen, and the English language and the Latin alphabet (or one of the half-dozen other major writing systems) were on every screen and every keyboard" — putting at a great disadvantage those who could only read and write, say, Mandombe, Wancho, or Hanifi Rohingya. 2019, by contrast, turns out to be "a remarkable time in the history of writing systems" when, "in spite of creeping globalization, political oppression, and economic inequalities, minority cultures are starting to revive interest in their traditional scripts."

How to Disagree March 2008 The web is turning writing into a conversation. Twenty years ago, writers wrote and readers read. The web lets readers respond, and increasingly they do—in comment threads, on forums, and in their own blog posts. Stumble upon. Bracelet/cellphone Phone Fashion The trend in concept phones these days is turning retro, which is why we have the “Dial” reminisce the era of the round-dials on phones. The difference however lies in the present concept being touted as a fashion accessory that can be crafted in the metal of choice; giving you the luxury of being, chic, sporty, or uber-rich. A projected light beam in the inner circle impersonates the rotary dial, but to dial a number you need to simply touch it.

A (Not So) Complete History of Literary Tattoos Johannes Guttenberg invented the printing press in Germany in 1439. Samuel O’Reilly invented the modern tattoo machine in 1891. And sometime around the turn of the century the first literary tattoo was born. Whether nostalgic for the characters from a favorite children’s book or as a tribute to a favorite writer’s words, the book tattoo is a classy way to go. The lowbrow nature of the tattoo juxtaposes nicely against the highbrow art of the book. Here now, a look at some of its many forms.

Our Guide to French Internet & Text Slang What do kids say these days? The digital culture keeps French learners just as confused as our grandparents when it comes to the newest expressions à la mode. The good thing is that once you master a few texting codes, you’ll be able to communicate in written French on a daily basis. Sometimes, texting can be so much easier than talking face-to-face! Table of Contents 50 Best Cheap Date Ideas - Handmade Wedding Posted July 20, 2012 | 110 Comments The weekend is right around the corner and we thought it was a great opportunity to share this fun weekend-ready post. For some couples, once they get engaged the ‘dates’ go right out the window, traded in for constant wedding planning.

Harry Potter Tattoos As a Harry Potter fan I love Harry Potter related tattoos much too. Tags: Harry Potter Tattoos The Science Of Dirty Talk And Why It Increases Sexual Pleasure Harder. Keep going, don’t stop. Yeah, you like that, baby? As forced as it sounds when you read it, many of us love hearing dirty talk in the bedroom. We lose ourselves in the heat of passion and take on a persona that turns us on in the most naughty, unconventional ways. But there’s more to it than that. IPA Typewriter If the title above does not display correctly, you should click on "About" to find out how to get a unicode font. Introduction You can use this tool to type phonemic symbols to be inserted in a word processor. You can also use it to produce the code needed to insert phonemic symbols in a web page.