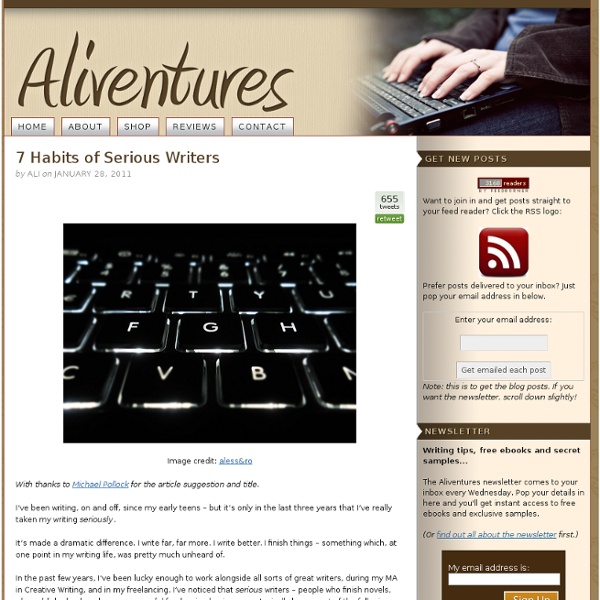 Image credit: aless&ro With thanks to Michael Pollock for the article suggestion and title. I’ve been writing, on and off, since my early teens – but it’s only in the last three years that I’ve really taken my writing seriously. It’s made a dramatic difference. I write far, far more. I write better. In the past few years, I’ve been lucky enough to work alongside all sorts of great writers, during my MA in Creative Writing, and in my freelancing. Habit #1: Writing To be a serious writer, you have to write. Yes, that’s obvious. Maybe you’re one of them. Unfortunately, you won’t get any better at writing unless you actually write. I know it’s tough. You can do it. Writing “regularly” is key here. Get Serious Write. Habit #2: Focus Maybe you’ve planned to write for two hours on a Saturday morning. Writing is hard work – and you’ll come up with all sorts of distractions to keep you from it. Serious writers, though, know how to help themselves focus. Habit #3: Reading Habit #4: Learning

30 books before 30 In various ways, these 30 books convey some of the philosophy of how Angel and I live our lives. I honestly credit a fraction of who I am today to each title. Thus, they have indirectly influenced much of what I write about on this site. A medley of both fiction and nonfiction, these great reads challenged my internal status quo, opening my mind to new ideas and opportunities, and together they gave me a basic framework for living, loving, learning and working successfully. The Four Essential Stages of Writing Image by photosteve101 In last week’s post, 7 Habits of Serious Writers, I mentioned the importance of actually writing, plus the need to redraft. I thought it’d be worth putting those stages into context – because they’re not all you need for an effective piece. Every finished piece of writing passes through four stages:

how to write fiction - hemingway Image by Lloyd Arnold via Wikimedia Commons Before he was a big game hunter, before he was a deep-sea fisherman, Ernest Hemingway was a craftsman who would rise very early in the morning and write. His best stories are masterpieces of the modern era, and his prose style is one of the most influential of the 20th century. Hemingway never wrote a treatise on the art of writing fiction. He did, however, leave behind a great many passages in letters, articles and books with opinions and advice on writing. Getting Started: Clustering Ideas Clustering Clustering is similar to another process called Brainstorming. Clustering is something that you can do on your own or with friends or classmates to try to find inspiration in the connection between ideas. The process is similar to freewriting in that as you jot down ideas on a piece of paper or on the blackboard, you mustn't allow that ugly self-censor to intrude and say that your idea (or anyone else's) is dumb or useless. Write it down anyway. In Clustering, you jot down only words or very short phrases.

The Daily Rituals Of Famous Writers Mornings: you groggily emerge from your bleary-eyed state, fumbling for the snooze button while steering well clear of that drool patch on the pillow. Then after downing your first coffee of the day, you proceed to type the final chapter to one of the best-selling novels ever written. Okay, so perhaps you play Angry Birds instead. But whatever your reason for not penning a masterpiece, you can be sure that your own daily habits don't stray too far from those used by famous authors - past and present - to trigger their creative spark. how to write better Writing is a muscle. Smaller than a hamstring and slightly bigger than a bicep, and it needs to be exercised to get stronger. Think of your words as reps, your paragraphs as sets, your pages as daily workouts. Think of your laptop as a machine like the one at the gym where you open and close your inner thighs in front of everyone, exposing both your insecurities and your genitals. Because that is what writing is all about.

5 situations where it's better to tell than show in your fiction Good stuff; thanks for the article, and I agree with most of it. I think I disagree, though, at least partly, with your point near the end about the emotional/psychological stuff; I think that a lot of the time that's exactly what "show, don't tell" is meant to be all about. For example, if your character is tired, you can say "She was tired." Or you can indicate indirectly, through her actions and her dialogue and other people's reactions to her, that she's tired. The latter is often a lot more effective in conveying the idea that she's tired.

Kurt Vonnegut’s 8 Tips on How to Write a Great Story By Maria Popova The year of reading more and writing better is well underway with writing advice the likes of David Ogilvy’s 10 no-bullshit tips, Henry Miller’s 11 commandments, Jack Kerouac’s 30 beliefs and techniques, John Steinbeck’s 6 pointers, and various invaluable insight from other great writers. Now comes Kurt Vonnegut (November 11, 1922–April 11, 2007) — anarchist, Second Life dweller, imaginary interviewer of the dead, sad soul — with eight tips on how to write a good short story, narrated by the author himself. Use the time of a total stranger in such a way that he or she will not feel the time was wasted.Give the reader at least one character he or she can root for.Every character should want something, even if it is only a glass of water.Every sentence must do one of two things — reveal character or advance the action.Start as close to the end as possible.Be a Sadist.

Writing In Public Writing in Public: A Year (or two) In the Life of a Professional Fiction Writer On this page, if you would like for some reason to go back through all the posts on Writing in Public, here are some of the totals to figure out which month you would like to look at. Make sure you read the comments on the posts as well. Great questions on writing. I will put up the monthly total and summary here at the bottom, including the projects finished and where you can find them. The Daily Routines of Great Writers by Maria Popova “A writer who waits for ideal conditions under which to work will die without putting a word on paper.” UPDATE: These daily routines have now been adapted into a labor-of-love visualization of writers’ sleep habits vs. literary productivity. Kurt Vonnegut’s recently published daily routine made we wonder how other beloved writers organized their days. So I pored through various old diaries and interviews — many from the fantastic Paris Review archives — and culled a handful of writing routines from some of my favorite authors.

online shakespeare course Marjorie Garber, PhD, William R. Kenan Jr. Professor of English and American Literature and Language and of Visual and Environmental Studies, Harvard University Read These Seven Books, and You'll be a Better Writer Donald Miller I used to play golf but I wasn’t very good. I rented a DVD, though, that taught me a better way to swing, and after watching it a few times and spending an hour or so practicing, I knocked ten strokes off my game.