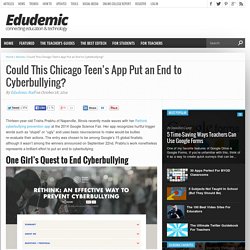 Her app recognizes hurtful trigger words such as “stupid” or “ugly” and uses basic neuroscience to make would-be bullies re-evaluate their actions. The entry was chosen to be among Google’s 15 global finalists; although it wasn’t among the winners announced on September 22nd, Prabhu’s work nonetheless represents a brilliant effort to put an end to cyberbullying. According to the National Crime Prevention Council, 43 percent of teens experienced cyberbullying during the past year. Offensive material can come from instant messages, social media, forums, and the comments sections of popular websites. Cyberbullying is harder to track than traditional bullying, as it’s difficult to monitor the thousands of websites on which adolescents interact. The damage from cyberbullying is evident in related cases of suicide. Image via Imgur. Lot lærerne lese elevenes mobbemeldinger fra Twitter. 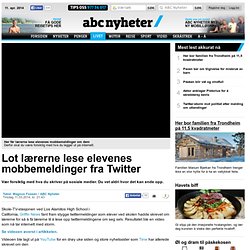 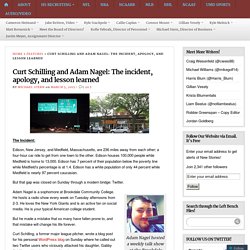 Edison houses 100,000 people while Medfield is home to 13,000. Edison has 7 percent of their population below the poverty line while Medfield’s percentage is at 1.4. Edison has a white population of only 44 percent while Medfield is nearly 97 percent caucasian. But that gap was closed on Sunday through a modern bridge: Twitter. Adam Nagel hosted a weekly talk show at the Brookdale radio station Adam Nagel is a sophomore at Brookdale Community College. But he made a mistake that so many have fallen prone to, and that mistake will change his life forever. Curt Schilling, a former major league pitcher, wrote a blog post for his personal WordPress blog on Sunday where he called out two Twitter users who viciously attacked his daughter, Gabby Schilling, with vulgar tweets. Adam Nagel accused of sending vulgar tweets about Schilling's daughter. Bullied - Let Us Be Kind. Cyberbullying Lesson for Elementary ESL Students by Stephanie Caiza Valera on Prezi. 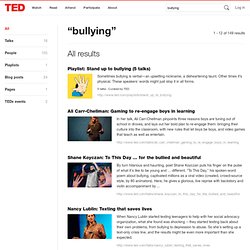 Other times it’s physical. 5 talks · Curated by TED Ali Carr-Chellman: Gaming to re-engage boys in learning In her talk, Ali Carr-Chellman pinpoints three reasons boys are tuning out of school in droves, and lays out her bold plan to re-engage them: bringing their culture into the classroom, with new rules that let boys be boys, and video games that teach as well as entertain. Shane Koyczan: To This Day ... for the bullied and beautiful By turn hilarious and haunting, poet Shane Koyczan puts his finger on the pulse of what it's like to be young and … different. Breaking News English ESL Lesson Plan on Cyberbullying of Teachers. Anti-Bullying Day. Bullying is one of the nastier, darker sides of human nature. 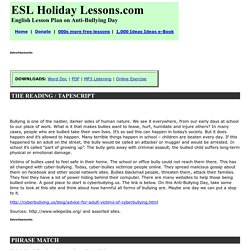 We see it everywhere, from our early days at school to our place of work. What is it that makes bullies want to tease, hurt, humiliate and injure others? In many cases, people who are bullied take their own lives. It’s so sad this can happen in today’s society. But it does happen and it’s allowed to happen. Victims of bullies used to feel safe in their home. Sources: and assorted sites. Advertisements Match the following phrases from the article. Paragraph 1 Paragraph 2 Bullying is one _______________________ sides of human nature. New Mormon Message on Bullying Resonates with Global Audience - Church News and Events. Contributed By From MormonNewsrooom.org Article Highlights A new Mormon Messages video that focuses on bullying in the digital age is striking a chord with audiences on the Mormon Channel and on social media channels. 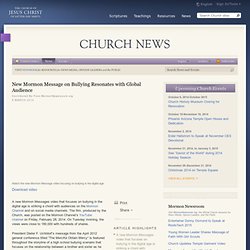 “When it comes to hating, gossiping, ignoring, ridiculing, holding grudges, or wanting to cause harm, please apply the following: Stop it!” —Dieter F. Uchtdorf of the First Presidency. Bullying. 20101103_pzl2.pdf. Movies. Masterxdocumentxv1.