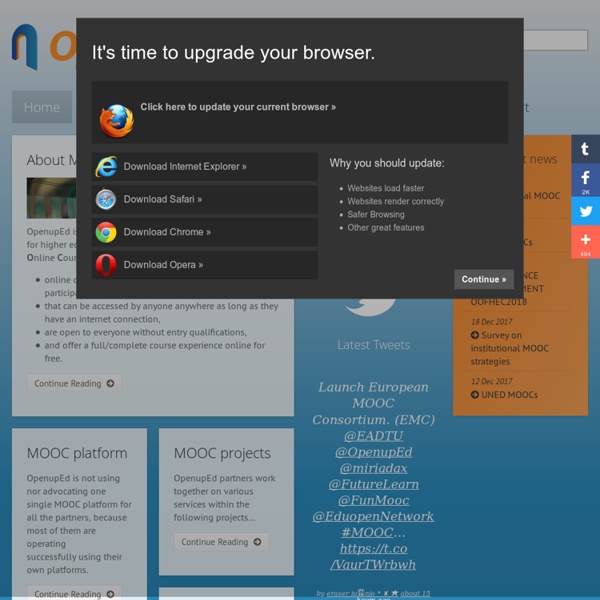 Udacity has Left the Building There was a big story in MOOC-world last week, which the mainstream press has surprisingly yet to pick up on; namely, that Udacity, one of the three big corporate MOOC players, has just left the building. Udacity, if you recall, was created by one Sebastian Thrun, a computer scientist at Stanford. It was he who kicked off the current MOOC craze by opening up one of his computer science classes to the world, and then finding out that 160,000 people around the world had signed up. 21 Conversational Russian Phrases to Learn to Fit In with Natives Ever found yourself wondering what the real Russian language ”tastes” like? You know—the raw, unrefined Russian. The Russian you’re not going to encounter in textbooks, blog posts, audio lessons and most other sources you learn Russian from? The fact is, the gap between the literary Russian (you’re most probably learning) and the everyday, “average Joe” or, to put it more appropriately, “average Ivan” Russian is dramatically bigger than the gap between the literary and everyday English.

Recommended MOOCs By Steve Kolowich In what could be a major step toward bridging the gap between massive open online courses and the credentialing system that they are supposed to "disrupt," the American Council on Education on Thursday endorsed five MOOCs for credit. Two of the approved courses, "Introduction to Genetics and Evolution" and "Bioelectricity: A Quantitative Approach," come from Duke University. Two others, "Pre-Calculus" and "Algebra," come from the University of California at Irvine. The last, "Calculus: Single-Variable," comes from the University of Pennsylvania.

Sapienza University of Rome Sapienza University of Rome, founded in 1303 by Pope Boniface VIII, is the oldest University in Rome and the largest in Europe. Since its founding over 700 years ago, Sapienza has played an important role in Italian history and has been directly involved in key changes and developments in society, economics and politics. It has contributed to the development of Italian and European science and culture in all areas of knowledge. The main campus, designed by Marcello Piacentini, was opened in 1935. It is situated close to the city centre, and is the largest in Europe - a real city within a city where teaching activities are integrated with libraries and museums as well as comprehensive student services. Faculties and Departments also carry out their activities in decentralized locations in different parts of the city.

Higher Education Strategy Associates So, recently, a colleague sent me some data produced by CMEC on the subject of labour market outcomes by educational attainment, among 16-65 year-olds. Here’s the first one, showing outcomes for Canada. Labour Market Status by Educational Attainment, 16-65 Year-Olds, Canada, 2012 (Source: The Programme for the International Assessment of Adult Competencies, 2012)

Discovering Science Program - FutureLearn Learn about the extraordinary world of everyday chemistry, and earn 10 credits from the University of Leeds The Discovering Science program consists of five short online courses. Each course looks at how chemistry plays an important role in our everyday lives, by exploring topics such as advances in modern medicine, food, climate, and household products. Through case studies and discussions, explore how research is responsible for significant scientific developments. MRUniversity That’s Marginal Revolution University, MRU, or I suppose to some “Mister” University. We think education should be better, cheaper, and easier to access. So we decided to take matters into our own hands and create a new online education platform toward those ends.

25 Killer Websites that Make You Cleverer It’s easy to forget that we have access to a virtually limitless resource of information, i.e. the Internet. For a lot of us, this is even true at our fingertips, thanks to the ubiquity of smartphones and an ever-increasing push for online greatness by tech engineers all over the world. As a result, there are countless websites out there that are geared to make you smarter and more brilliant for either a low or no cost. Here are just 25 killer websites that may just make you more clever than ever before. Princeton Experience By Mitchell Duneier A few months ago, just as the campus of Princeton University had grown nearly silent after commencement, 40,000 students from 113 countries arrived here via the Internet to take a free course in introductory sociology. The noncredit Princeton offering came about through a collaboration between Coursera, a new venture in online learning, and 16 universities, including my own.

The Metamorphosis of MOOCs At a recent meeting of educational technology policy advisors, a well-informed university CIO casually declared that MOOCs were history. It’s true they stopped making headlines a while ago, but they have hardly abated. They may, however, need a change of name, just as we rename mature caterpillars “butterflies” or “moths.” Increasingly, MOOCs are being packaged into series of courses with a non-degree credential being offered to those who successfully complete the series. Some people wonder whether these credentials could serve as an alternative to a degree. Others hope that they may provide a pathway to a degree.