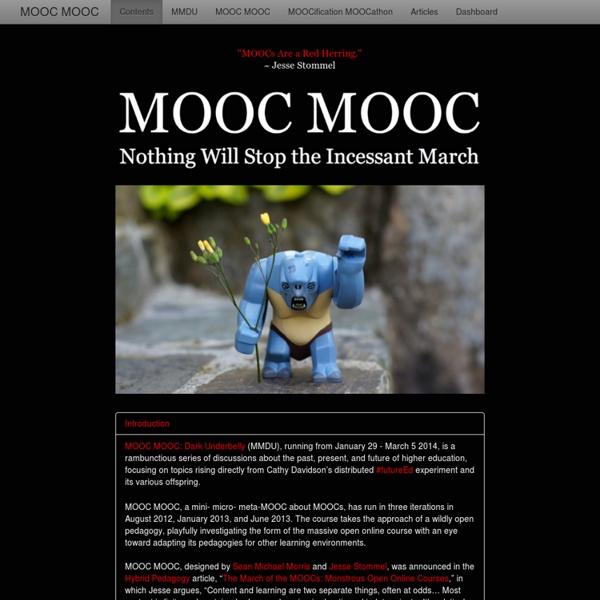 What is a connectivist MOOC? | Connectivist MOOCs “MOOCs” are massive open online courses. Dave Cormier introduces the MOOC: There’s a great written explanation of MOOCs in the introduction to the PLENK2010 MOOC Stephen Downes explains: This longer interview with George Siemens and Howard Rheingold is also a very helpful introduction to connectivism: August 2012′s MOOCMOOC was a one-week course led by Hybrid Pedagogy which examined the MOOC medium. As a springboard for more on MOOCs, check out the readings from Sunday and Monday and have a look at this piece on the MOOC Misnomer which does a nice job of dismantling lazy use of the term. A shorthand has emerged which distinguishes between connectivist courses – cMOOCs – and ones that are more broadcast-focused and reliant upon certification and peer testing. I’ve made my own attempt at distinguishing between xMOOCs and cMOOCs. This site exists to point people towards connectivist courses. xMOOCs are already excellently served by Class Central.

The MOOC bubble and the attack on public education In the last year, MOOCs have gotten a tremendous amount of publicity. Last November, the New York Times decided that 2012 was “the Year of the MOOC,” and columnists like David Brooks and Thomas Friedman have proclaimed ad nauseum that the MOOC “revolution” is a “tsunami” that will soon transform higher education. As a Time cover article on MOOCs put it—in a rhetorical flourish that has become a truly dead cliché—“College is Dead. Long Live College!” Where is the hype coming from? At the same time, the speed at which an obscure form of non-credit-based online pedagogy has gone so massively mainstream demonstrates the level of investment that a variety of powerful people and institutions have made in it. After all, when the term itself was coined in 2008— MOOC, for Massively Open Online Course—it described a rather different kind of project. The MOOCs that emerged in 2012 look very different, starting with their central narratives of “disruption” and “un-bundling.”

Training Resources Three Kinds of MOOCs « Lisa By Lisa, on August 15th, 2012 We are so into MOOCs now that it’s too much for me. Gotta apply Ockham’s Razor 2.0 to this stuff. At the Ed-Media conference, I attended a session by Sarah Schrire of Kibbutzim College of Education in Tel Aviv. Each type of MOOC has all three elements (networks, tasks and content), but each has a goal that is dominant. Network-based MOOCs are the original MOOCs, taught by Alec Couros, George Siemens, Stephen Downes, Dave Cormier. Task-based MOOCs emphasize skills in the sense that they ask the learner to complete certain types of work. Content-based MOOCs are the ones with huge enrollments, commercial prospects, big university professors, automated testing, and exposure in the popular press. So I’m rejecting both the Good vs Bad MOOC model, and the million-points-of-MOOC approach, and going for a triad.

How 21st Century Thinking Is Just Different How 21st Century Thinking Is Just Different by Terry Heick This content is proudly sponsored by The Institute for the Habits of Mind, promoting the development of personal thinking habits in 21st century learners. In an era dominated by constant information and the desire to be social, should the tone of thinking for students be different? After all, this is the world of Google. In this world full of information abundance, our minds are constantly challenged to react to data, and often in a way that doesn’t just observe, but interprets. As a result, the tone of thinking can end up uncertain or whimsical, timid or arrogant, sycophant or idolizing–and so, devoid of connections and interdependence. The nature of social media rests on identity as much as anything else—forcing subjectivity on everything through likes, retweets, shares, and pins. But this takes new habits. Information Abundance Persisting. Managing impulsivity. Responding with awe. Questioning. Innovating. Thinking interdependently.

MOOC Platforms Welcome to MOOC.CA ~ MOOC 9 Characteristics Of 21st Century Learning The label of “21st Century learning” is vague, and is an idea that we here at TeachThought like to take a swing at as often as possible, including: –weighing the magic of technology with its incredible cost and complexity –underscoring the potential for well thought-out instructional design –considering the considerable potential of social media platforms against its apparent divergence from academic learning Some educators seek out the ideal of a 21st century learning environment constantly, while others prefer that we lose the phrase altogether, insisting that learning hasn’t changed, and good learning looks the same whether it’s the 12th or 21st century. At TeachThought, we tend towards the tech-infused model, but do spend time exploring the limits and challenges of technology, the impact of rapid technology change, and carefully considering important questions before diving in head-first. The size of the circles on the map are intended to convey priority. 1. 2. 3. 4. 5. 6. 7. 8. 9.

Reflection on the ‘eLearning and Digital Cultures’ MOOC, Wk.1 #edcmooc Here are some notes, links, conversations, thoughts, and reflections on the first week of the University of Edinburgh / Cousera ‘eLearning and Digital Cultures’ MOOC. This reflection will form part of the work required by the MOOC as well as reflections on the processes and Coursera system itself. Initial thoughts on the course and/or platform (supplemental to my earlier post): Agree to abide by an ‘honour code’ – much like a learning contract that some places use with students, does anyone have any indication that this works (or not)? Now for my reflection on week one of the course itself: Hand and Sandywell (2002) One film I felt could be used to highlight the technology/natural divide is Bruce Willis’ ‘Surrogates‘, where “humans live in isolation and interact through surrogate robots”. YouTube: Surrogates Trailer YouTube: THX 1138 Trailer Here is a tweet I sent earlier today, anyone want to comment on this? Postscript: I’m find this harder than I thought. Referenced material: