How To Write A Novel Using The Snowflake Method 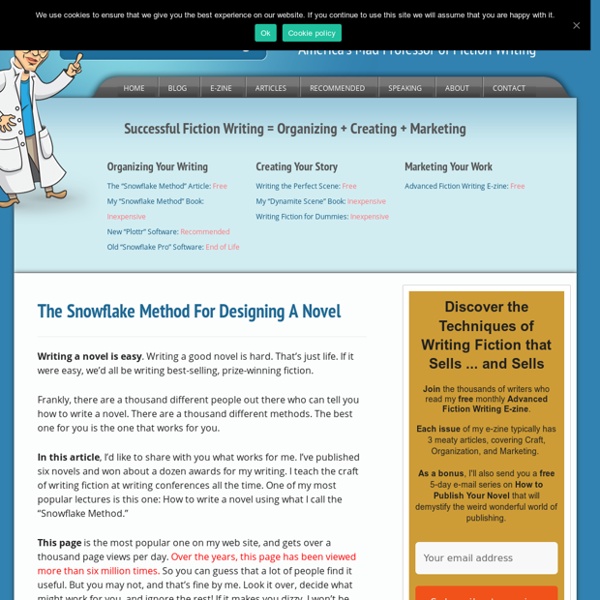 Writing a novel is easy. Writing a good novel is hard. That’s just life. If it were easy, we’d all be writing best-selling, prize-winning fiction. Frankly, there are a thousand different people out there who can tell you how to write a novel. There are a thousand different methods. In this article, I’d like to share with you what works for me. This page is the most popular one on my web site, and gets over a thousand page views per day, so you can guess that a lot of people find it useful. Good fiction doesn’t just happen, it is designed. For a number of years, I was a software architect designing large software projects. I claim that that’s how you design a novel – you start small, then build stuff up until it looks like a story. If you’re like most people, you spend a long time thinking about your novel before you ever start writing. But before you start writing, you need to get organized. Step 1) Take an hour and write a one-sentence summary of your novel. Shorter is better.

Jordan McCollum: Six Steps to Stronger Character Arcs in Romances I’m excited to welcome back JORDAN MCCOLLUM. Today Jordan tackles the tricky topic of character arcs – with a checklist to help make them stronger. You can have the greatest plot in the world—but if your characters are flat your book will be, too. The Subplot - Not Second Place, but Side by Side There is one element in plotting our story that we sometimes forget or neglect—the subplot. The subplot is what rounds out a novel or screenplay, informing it with another shade of emotional colour to deliver a satisfying and entertaining experience. It is the parallel narrative that allows the writer to explore theme, deepen characterisation, add tension or allow some relief. The subplot helps us understand the characters a bit better and gives a better sense of pace. Love and other pursuits.

Let Me Count the Ways: 10 Numerical Idioms Slideshow Let Me Count the Ways: 10 Numerical Idioms [furst-reyt] In the 1600s, first-rate referred to a class of warships of the highest “rate,” or value. By the early 1700s, first-rate moved beyond the sea, and came to refer to persons of high rank. 6 Ways to Hook Your Readers Although I consider myself an avid reader, I must admit I have a short attention span when it comes to getting into books. If you fail to grab my attention in the first few lines, I start spacing out. Most readers are like me. Most people don’t want to spend the first 50 pages trying to get into a book. Here are a few things I find annoying in the first lines of a story:

50 Romance Plot Ideas! This post was originally titled, “Master List of Romantic Conflicts,” but it really contains big ideas for entire plots. Of course, to write an engrossing love story–whether it’s a straight-up romance, or a subplot in a different kind of book or movie–it has to have strong conflict. Like Shakespeare said, “The course of true love never did run smooth.” Obstacles give your characters the chance to change and grow as people, and to prove how much they really do love each other. It also gives them interesting things to do.

Write a Plot Outline: Infographic Learning how to write a plot outline is an essential skill if you want to become a prolific author. Whether you find the distant target of reaching a substantial word length or the creation of a satisfying, forward-moving plot daunting, if you write a plot outline for your novel in advance you will have a blueprint that you can alter if necessary as you go. Our previous post on the subject suggested 7 ways you can outline your novel. We’ve since converted this information into the handy infographic below. Save it, pin it, or share it with writers you know who could benefit from having a clear structure in place before they begin writing their first drafts. Click image to view full size Internet Anagram Server / I, Rearrangement Servant : anagram, anagrams, nag a ram, software, anagramme, anagrama, wordplay, word play, anagram creator, anagram solver, anagram finder, anagram generator, anagram maker, anagram unscrambler, anagram machine, Internet Anagram Server in News:New York TimesSydney Morning HeraldGlobe and MailJerusalem Post Did you know that parliament is an anagram of partial men? Or, Clint Eastwood an anagram of Old West Action? Someone once said, "All the life's wisdom can be found in anagrams. Anagrams never lie." Here is your chance to discover the wisdom of anagrams.

Ten rules for writing fiction Elmore Leonard: Using adverbs is a mortal sin 1 Never open a book with weather. If it's only to create atmosphere, and not a charac­ter's reaction to the weather, you don't want to go on too long. The reader is apt to leaf ahead look­ing for people. Samurai cinema While earlier samurai period pieces were more dramatic rather than action-based, samurai movies post World War II have become more action-based, with darker and more violent characters. Post-war samurai epics tended to portray psychologically or physically scarred warriors.[2] Akira Kurosawa stylized and exaggerated death and violence in samurai epics. His samurai, and many others portrayed in film, were solitary figures, more often concerned with concealing their martial abilities, rather than bragging of them.[2] Historically, the genre is usually set during the Tokugawa era (1600–1868), the samurai film focuses on the end of an entire way of life for the samurai, many of the films deal with masterless ronin, or samurai dealing with changes to their status resulting from a changing society.

How to Structure A Story: The Eight-Point Arc By Ali Hale One of my favourite “how to write” books is Nigel Watts’ Writing A Novel and Getting Published. My battered, torn and heavily-pencil-marked copy is a testament to how useful I’ve found it over the years. How To Insult Like a Fancypants Shakespeare Insult Kit Since 1996, the origin of this kit was listed as anonymous. It came to me on a piece of paper in the 90's with no attribution, and I thought it would make a cool web page. Though I searched for the origin, I could never find it. 25 Things You Should Know About Storytelling 1. Stories Have Power Outside the air we breathe and the blood in our bodies, the one thing that connects us modern humans today with the shamans and emperors and serfs and alien astronauts of our past is a heritage — a lineage — of stories. Stories move the world at the same time they explain our place in it. They help us understand ourselves and those near to us.

3 Types of Character Arcs: Choose the Best for Your Novel How Does Your Character Change? You know your character must change somehow over the course of your novel. But how? And more than that, how do you sync the changes with the external plot? 6 Ways to Create Riveting Conflict in Your Story Who says conflict is a bad thing? Who says world peace is the most important goal of humanity? Who says arguing with your little brother when you’re a kid means you’ll grow up to be an ill-mannered ruffian? Not a writer, that’s for sure!