May 2014 Breaking News Labs Mixing Human DNA Animal DNA 1 of 5 - Last days news prophecy. 6 Staggering Videos of the US Using Chemical Agents Against Its Citizens And Others. Atomic Veterans Atomic veterans are United States military veterans who were exposed to ionizing radiation while stationing in the Japanese cities of Hiroshima and Nagasaki during the American occupation of Japan before 1946 (including certain veterans who were Prisoners of War there) - or veterans who took part in atmospheric nuclear tests between 1945 and 1962. 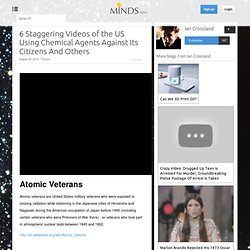 ProjectMKUltra Project MKUltra (Known as "Project MKSearch" from 1964 on) was a mind control program administered by factions of the US Government from the 1950's through the 1970's. It involved the administration of drugs (especially LSD) and other chemicals, as well as hypnosis, sensory deprivation, isolation, verbal and sexual abuse, and other forms of torture. Often, the subjects were not aware they were being tested. Most of the Project MKUltra records were deliberately destroyed in 1972 by, then, CIA Director, Richard Helms, and, so, it is difficult to discern what many of the 160 Project MKUltra programs were. Agent Orange. The Era Of Chimeras: Scientists Fearlessly Create Bizarre Human/Animal Hybrids. Did you know that scientists are creating cow/human hybrids, pig/human hybrids and even mouse/human hybrids? 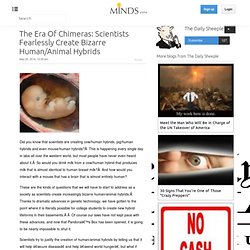 Â This is happening every single day in labs all over the western world, but most people have never even heard about it.Â So would you drink milk from a cow/human hybrid that produces milk that is almost identical to human breast milk? Â And how would you interact with a mouse that has a brain that is almost entirely human? These are the kinds of questions that we will have to start to address as a society as scientists create increasingly bizarre human/animal hybrids.Â Thanks to dramatic advances in genetic technology, we have gotten to the point where it is literally possible for college students to create new hybrid lifeforms in their basements.Â Â Of course our laws have not kept pace with these advances, and now that Pandoraâ€™s Box has been opened, it is going to be nearly impossible to shut it.

From their point of view, it all makes perfect sense. When they learn to talk? The Era Of Chimeras: Scientists Fearlessly Create Bizarre Human/Animal Hybrids. Trans-Humanism / Genetic Modification of all Life / Nano-Technology / HAARP / Geoengineering - Film. Will You Swallow Google's Edible Microchip? Forget the mediocre Tom Cruise movies that barely justified their rental fee, this truly might be one of the creepiest 'future is now' transhumanist magic acts to date. 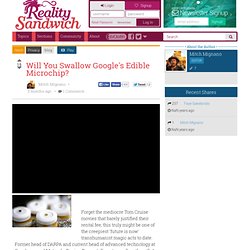 Former head of DARPA and current head of advanced technology at Google-owned Motorola, Regina Dugan tells us to swallow the pill. As she explains: "When you swallow it, the acids in your stomach serve as the electro-light and they power it up and the switch goes on and off and it creates an 18 bit ECG like signal in your body and essentially your entire body becomes your authentication token. " Since it's FDA approved and, as Dugan claims, can be taken 30 times a day without affecting your health, this pill a small price to pay for accessing your car and cell phone, right? Right. In case that's not enough, Dugan's also pushing a wearable E-tattoo that reads minds by detecting unvocalized words in the throat. This is not 'The Onion' folks, this is real.

One Company Has Enormous Power in the Breast Cancer 'Market' May 14, 2013 | Like this article? 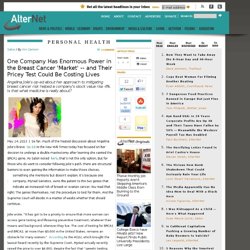 Join our email list: Stay up to date with the latest headlines via email. So far, much of the heated discussion about Angelina Jolie’s brave Op-Ed in the New York Times today has focused on her decision to undergo a double mastectomy after learning she carried the BRCA1 gene. As Salon noted here , that’s not the only option. Jolie wrote, “It has got to be a priority to ensure that more women can access gene testing and lifesaving preventive treatment, whatever their means and background, wherever they live. Myriad’s monopoly over BRCA1 and BRCA2 not only means showing that it can charge whatever it wants for the test; it also means that further research on the genes is restricted, and that women who take the test and get an ambiguous result can’t get a second opinion, only take the test again.

The economic and racial implications of all this are major, both for how the research has been done and who gets access to it. TED Flirts with Scientism. Recent developments within the TEDx conference (Technology, Entertainment, and Design) community of organizers are indicative of a rising tide of intolerance in the world of science. 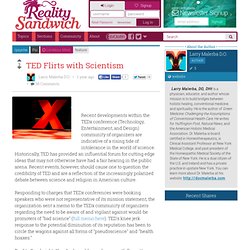 Historically, TED has provided an influential forum for cutting edge ideas that may not otherwise have had a fair hearing in the public arena. Recent events, however, should cause one to question the credibility of TED and are a reflection of the increasingly polarized debate between science and religion in American culture. Responding to charges that TEDx conferences were booking speakers who were not representative of its mission statement, the organization sent a memo to the TEDx community of organizers regarding the need to be aware of and vigilant against would-be promoters of "bad science" (full memo here).

TED's knee jerk response to the potential diminution of its reputation has been to circle the wagons against all forms of "pseudoscience" and "health hoaxes. " Rupert Sheldrake - The Science Delusion BANNED TED TALK.