25 Things You Should Know About Plot 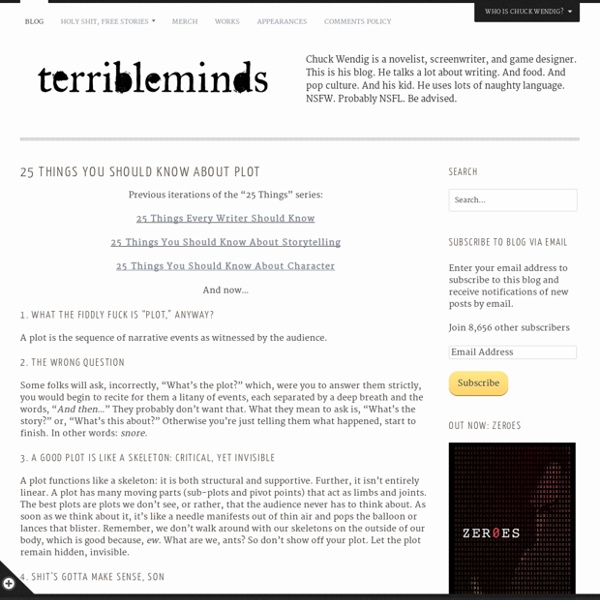 Previous iterations of the “25 Things” series: 25 Things Every Writer Should Know 25 Things You Should Know About Storytelling 25 Things You Should Know About Character And now… 1. A plot is the sequence of narrative events as witnessed by the audience. 2. Some folks will ask, incorrectly, “What’s the plot?” 3. A plot functions like a skeleton: it is both structural and supportive. 4. The biggest plot crime of them all is a plot that doesn’t make a lick of goddamn sense. 5. The simplest motherfucker of a plot is this: things get worse until they get better. 6. Fiction is driven by characters in conflict, or, put differently, the flame of fiction grows brighter through friction. 7. Of course, the essence of the essential conflict — the one below all that Wo/Man versus stuff — is a character’s wants versus a character’s fears. 8. A plot grows within the story you’re telling. 9. 10. Plot offers the promise of Chekov and his gun, of Hitchcock and his bomb under the table. 11. 12. 13. 13. 14.

Writing Is Not Lonely, But Avoiding It Is | AndiLit.com You’ll never know what you’re made of until you sit long enough with the writing to move through the pulls for companionship (whether virtual or “real”). — Laraine Herring I am agitated at the core of myself these days. Obviously, something is happening in my spirit – some cleansing, some burning off of the chaff, some rearranging of the fragments of myself – and I am tired, teary, and baffled with life most minutes of most days. If I was smart, I’d be buried in words because of this. But I am not smart. “Writing is lonely.” When I write, I feel like I’ve walked into a forest where even the trees speak companionship to me. So the struggle I have is not with loneliness but with fear, the fear that just one time I will come to the page and find it empty. I must cocoon myself with my words and with my self. – “Alone Among Many – Lake Kidelju” Be Sociable, Share! AndiLit in your Inbox Author: Andi

25 Things Every Writer Should Know An alternate title for this post might be, “Things I Think About Writing,” which is to say, these are random snidbits (snippets + tidbits) of beliefs I hold about what it takes to be a writer. I hesitate to say that any of this is exactly Zen (oh how often we as a culture misuse the term “Zen” — like, “Whoa, that tapestry is so cool, it’s really Zen“), but it certainly favors a sharper, shorter style than the blathering wordsplosions I tend to rely on in my day-to-day writing posts. Anyway. Peruse these. Feel free to disagree with any of these; these are not immutable laws. Buckle up. 1. The Internet is 55% porn, and 45% writers. 2. A lot of writers try to skip over the basics and leap fully-formed out of their own head-wombs. 3. Some writers do what they do and are who they are because they were born with some magical storytelling gland that they can flex like their pubococcygeus, ejaculating brilliant storytelling and powerful linguistic voodoo with but a twitch of their taint. 4. 5.

D. W. Mills Jr. Neuroses run rampant in me. I think I am, unfortunately more neurotic than most (although I've read that many other writers feel this way). You will undoubtedly see this rear its ugly face in my writing. I am not a college graduate, although I am working on it. I am an addict I am a felon. Somehow I find it possible that none of these things really defines who I am. In some ways I am also a victim, but mostly I am not. I am a dreamer. I am a lifelong learner – at least in the sense that I am always having to re-learn how to do things that comes natural to other people. I am a writer – at least in the sense that I occasionally write because it is the only thing that seems completely right when I am doing it. Lastly, I am much more than all of this.

Eight Secrets Which Writers Won’t Tell You Image from Flickr by Lazurite This is not particularly relevant to the post, but I’m getting an awful lot of comments telling me, often a little snarkily, “it’s ‘THAT’ not ‘WHICH’”. The “don’t use which for restrictive clauses” rule comes (as far as I can tell) from Strunk and White. Plenty of authors, including Austen, have used “which” exactly as I use it in the title. It’s very commonly used like this here in England, so I’m guessing my comments are coming from US readers. There was never a period in the history of English when “which” at the beginning of a restrictive relative clause was an error. I thought about putting “that” in the title – but I like the sound of “which” between “secrets” and “writers”. And with that out of the way, enjoy the post! A few years ago, I’d look at published writers and think that they were somehow different from me. They were real writers. I’m going to go through eight secrets. Secret #1: Writing is Hard The truth is, though, that writing is hard.

English 50 Exercises for Story Writers English 50 – Intro to Creative Writing: Exercises for Story Writers Basic Theory: What is a short story? As soon as someone delivers a definition, some good writer will write a story that proves the theory wrong. Short stories have a narrator; that is, someone tells the story; have at least one character in them; have some action occur (or perhaps fails to occur); take place somewhere; that is, there is a setting for the action; and someone either learns something or fails to learn something (theme).With these five characteristics in mind, we can create an almost endless supply of exercises to help sharpen our techniques of story telling. Narrative Voice Twenty or so years ago, voice was the "rite of passage" into a successful writing career. Nevertheless, a narrative voice that sounds like it could be anyone's voice or is bland and boring, or riddled with pointless clichés will fail to capture and hold the reader's attention. If you've written a story in third person, try it in first.

Read These Seven Books, and You’ll be a Better Writer Donald Miller I used to play golf but I wasn’t very good. I rented a DVD, though, that taught me a better way to swing, and after watching it a few times and spending an hour or so practicing, I knocked ten strokes off my game. I can’t believe how much time I wasted when a simple DVD saved me years of frustration. I’d say something similar is true in my writing career. • The War of Art by Steven Pressfield: This book is aimed at writers, but it’s also applicable to anybody who does creative work. Pressfield leaves out all the mushy romantic talk about the writing life, talk I don’t find helpful. • On Writing Well by William Zinsser: Zinsser may be the best practical writing coach out there. • Bird by Bird by Anne Lamott: Before becoming a literary superstar, Anne Lamott taught writing, and Bird by Bird is the best of her advice, broken up into chapters. Save the Cat by Blake Snyder: Plot and Structure by James Scott Bell: On Writing, by Stephen King: Zen in the Art of Writing by Ray Bradbury:

Inspired To Journal Writer’s Digest - Writing Prompts Write a scene that includes a character speaking a different language, speaking in a thick accent, or otherwise speaking in a way that is unintelligibe to the other characters. (Note: You don't necessarily need to know the language the character is speaking—be creative with it!) Describe a character's reaction to something without explaining what it is. Write a story or a scene about one character playing a prank on another. Writing Prompt: Write a story that involves confusion over homonyms (words that have the same spelling but different meanings) or homophones (words that sound the same but are spelled differently). For World Storytelling Day, share the best story you've ever heard or told by word of mouth, or have a fictional character recount their favorite story. You're making your way down a cobbled street when a stocky, red-bearded man beckons you into an alley. Pick an item from each column in the chart to create a simile.

40 of the Best Websites for Young Writers Jun 09, 2011 Looking for writing help, peer review, grammar tips or just a little bit of advice from the World Wide Web? Don't miss these 40 helpful websites for young writers. Writing Communities and Courses Young Writer's Society - Dedicated to scribes between the ages of 13 and 25, the Young Writer's Society is the world's largest website for young writers. Grammar and Reference Websites The Purdue Online Writing Lab - Purdue University's Online Writing Lab is a wonderful place to learn all of the various rules of grammar and usage. Creativity Boosters The Story Starter - Creativity abounds at Story Starter!