The map as history : a multimedia atlas of world history with animated historical maps 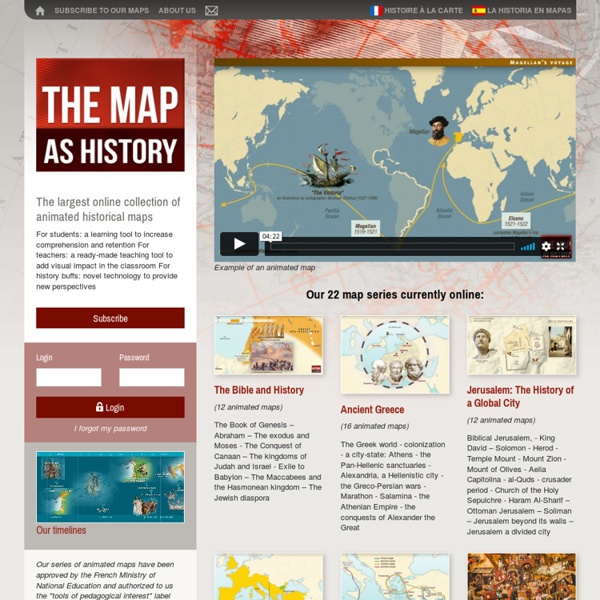 Ancient Greece 16 animated historical maps Antiquity – The Greek world - Mycenaeans - colonization – the Hellenistic kingdoms – a city-state: Athens – Athenian democracy - the Pan-Hellenic sanctuaries – Alexandria, a Hellenistic city – the Greco-Persian wars - Marathon - Salamina – The Peloponnesian war – the Athenian Empire – the conquests of Alexander the Great Rome and its Empire This new series will have a total of 16 animated maps. 6 are currently available online. History of Christianity (Part I – until the end of the 15th century)

Family tree of the Greek gods Key: The essential Olympians' names are given in bold font. See also List of Greek mythological figures Notes External links 6 Sites To Get Kids Excited About Google Maps I can remember three distinct occasions in my life where I have been blown away by technology. I will save the first two for another day, but I will say that the amazing experience of walking the streets of New York, from my computer on the other side of the world in Australia is definitely one of them. That feeling of disbelief where you wonder if it is another April 1st prank… What, they actually drove a little car all around the city taking photos??? But they did… And they continue to do so.

Using Timelines to Teach Language Timelines appeal to various learning styles, provide an easy explanation for tenses, and are a great way to collect information for graphic organization. Timelines can be created from photos or flash cards which the student can then use to play prediction games. Ideas for timelines include the chronicling of a family members or pets life, the history of an event, or plot events from a novel. Cool Online Timeline Tools:Befunky – For Photo EditingTimeToastXTimelineAllofMeSmilewidgetsTimerimeKidmondoVuvox

40 maps that explain the world Maps can be a remarkably powerful tool for understanding the world and how it works, but they show only what you ask them to. So when we saw a post sweeping the Web titled "40 maps they didn't teach you in school," one of which happens to be a WorldViews original, I thought we might be able to contribute our own collection. Some of these are pretty nerdy, but I think they're no less fascinating and easily understandable. A majority are original to this blog, with others from a variety of sources. Welcome...to the Renaissance As of July 1, 2013 ThinkQuest has been discontinued. We would like to thank everyone for being a part of the ThinkQuest global community: Students - For your limitless creativity and innovation, which inspires us all. Teachers - For your passion in guiding students on their quest.

IfItWereMyHome.com Canada A land of vast distances and rich natural resources, Canada became a self-governing dominion in 1867 while retaining ties to the British crown. Economically and technologically the nation has developed in parallel with the US, its neighbor to the south across an unfortified border. Canada faces the political challenges of meeting public demands for quality improvements in health care and education services, as well as responding to the particular concerns of predominantly francophone Quebec. 28 Tech Tools to Bring out the Story in History Below is an article I wrote for theapple.com. For the full article complete with links, please visit the original article. Kelly Tenkely | TheApple When I was in school, I dreaded history. I found it completely uninteresting, dry, irrelevant, and quite frankly…boring.

A Medieval Atlas By Melissa Snell Nothing helps bring the past into focus quite like a well-executed map. Here at the Medieval History site, I've provided some maps depicting parts of the world as it was during the Middle Ages. There are also many more maps available on the web. Our atlas is designed to help you find the map you need in the manner you find most convenient, and to offer you some intriguing documents of the past to explore.