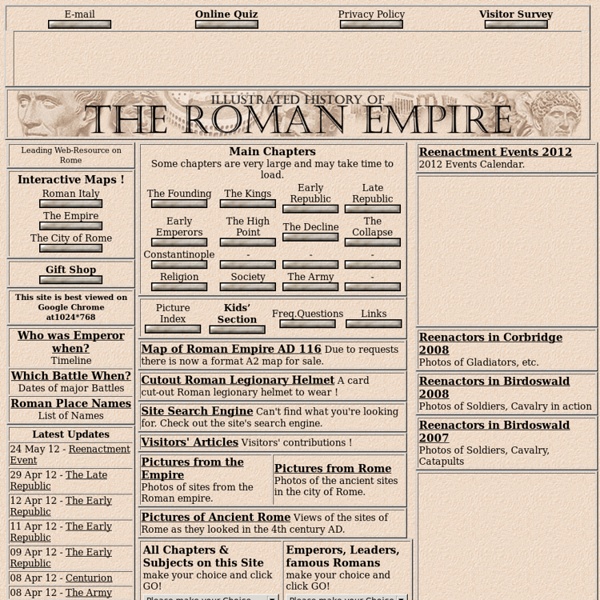 28 of history's most fascinating photos The Statue of Liberty surrounded by scaffolding as workers complete the final stages in Paris. Circa 1885. An Royal Air Force pilot getting a haircut during a break between missions, Britain, 1942 Bob Marley on the beach with Miss World 1976 Cindy Breakspeare, mother of Damien Marley. Ethnomusicologist Frances Densmore recording the music of a Blackfoot chief onto a phonograph, 1916. A napalm attack near U.S. troops on patrol in South Vietnam, circa 1966. Ancient Rome — History.com Articles, Video, Pictures and Facts The decadence and incompetence of Commodus (180-192) brought the golden age of the Roman emperors to a disappointing end. His death at the hands of his own ministers sparked another period of civil war, from which Lucius Septimius Severus (193-211) emerged victorious. During the third century Rome suffered from a cycle of near-constant conflict. A total of 22 emperors took the throne, many of them meeting violent ends at the hands of the same soldiers who had propelled them to power. Meanwhile, threats from outside plagued the empire and depleted its riches, including continuing aggression from Germans and Parthians and raids by the Goths over the Aegean Sea.

Ancient Egyptian scripts (hieroglyphs, hieratic and demotic) Origins of Egyptian Hieroglyphs The ancient Egyptians believed that writing was invented by the god Thoth and called their hieroglyphic script "mdju netjer" ("words of the gods"). The word hieroglyph comes from the Greek hieros (sacred) plus glypho (inscriptions) and was first used by Clement of Alexandria. The earliest known examples of writing in Egypt have been dated to 3,400 BC.

PBS: The Roman Empire As with many cultures, a person’s quality of life depended in many ways on their rank within the social structure. Two Romans living at the same time in the same city could have very different lives. Rich… For wealthy Romans, life was good. They lived in beautiful houses – often on the hills outside Rome, away from the noise and the smell.

Ancient skeletons discovered in Georgia threaten to overturn the theory of human evolution By David Derbyshire Updated: 12:26 GMT, 9 September 2009 For generations, scientists have believed Africa was the cradle of mankind. Now a stunning archaeological discovery suggests our primitive ancestors left Africa to explore the world around 800,000 years earlier than was previously thought before returning to their home continent. It was there - hundreds of thousands of years later - that they evolved into modern humans and embarked on a second mass migration, researchers say. Astonishing discovery: Archaeologists have unearthed six ancient skeletons dating back 1.8 million years in the hills of Georgia

Ancient Roman History Timeline Provides a chronological index of the history of Ancient Rome with extensive links to internet resources. Emphasis is placed upon the use of primary source material, numismatics, and a focus upon the roles of women in ancient time. scroll down for the timeline Thank you for visiting! Timeline Menu Ridley Scott's GLADIATOR is a great film. British Museum: Ancient Rome In legend Rome was founded in 753 BC by Romulus, its first king. In 509 BC Rome became a republic ruled by the Senate (wealthy landowners and elders) and the Roman people. During the 450 years of the republic Rome conquered the rest of Italy and then expanded into France, Spain, Turkey, North Africa and Greece. Rome became very Greek influenced or “Hellenised”, filled with Greek architecture, literature, statues, wall-paintings, mosaics, pottery and glass. But with Greek culture came Greek gold, and generals and senators fought over this new wealth. The Republic collapsed in civil war and the Roman empire began.

Unexplained Mysteries of LOST LANDS Many western cultures have myths of lost lands, where once lived our great ancestors. Typical is Lyonesse, a fabled land once said to exist between Land’s End and the Scilly Isles, off the British coast. On this land stood the city of Lions and some 140 churches. Folk tales, and later poets such as Tennyson, kept the fable alive by associating it with King Arthur. A Gateway to Ancient Rome William Smith's Dictionary of Greek and Roman Antiquities, an encyclopedic work containing a lot of good basic information (and references to primary sources), was published in 1875: it is thus an educational resource in the public domain. I've been putting a large selection of articles from it online, often as background material for other webpages. It is illustrated with its own woodcuts and some additional photographs of my own.

Rome Reborn - An Amazing Digital Model of Ancient Rome What did ancient Rome look like in A.D. 320? Rome Reborn is an international initiative to answer this question and create a 3D digital model of the Eternal City at a time when Rome’s population had reached its peak (about one million) and the first Christian churches were being built. The result is a truly stunning bird’s-eye and ground view of ancient Rome that makes you feel as if you were actually there. There are also some high-resolution images that lend themselves perfectly to being used as wallpaper for your computer.

1000-year-old coins found in Northern Territory may rewrite Australian history A find of 1000-year-old coins (not pictured) had led archaeologists to launch an expedition that may rewrite Australian history. Source: news.com.au REMEMBER when you were taught that Australia was discovered by James Cook in 1770 who promptly declared it "terra nullius" and claimed it for the British throne? Turns out that could be completely and utterly wrong.

Capitolium.org - Imperial Forums Official Website - Rome, Italy - Il sito ufficiale dei Fori Imperiali di Roma Welcome to the official website of the Roman Imperial Forums for the Y2K This project started in 1999 to celebrate the new millennium of the archaeological area of Rome, near the Colosseum, under the patronage of the Municipality of Rome and its mayor, sponsored by Canon and Microsoft Italy. This website contains more than 1,000 files. Visit it all, if you want, but please don't miss: Welcome to Rome.

5 Shockingly Advanced Ancient Buildings That Shouldn't Exist Back in the 1960s, surveyors in Turkey found an ancient buried complex composed of huge stone pillars arranged in a circle like Stonehenge, some of them 30 feet tall. What really knocked the monocles out of their eyes, however, was that this was much older than Stonehenge ... 6,000 years older. TeomancimitThe hieroglyphics translate to "First!" So those massive, ornate limestone pillars were carefully carved from a nearby quarry using hunks of flint rock and their bare hands.