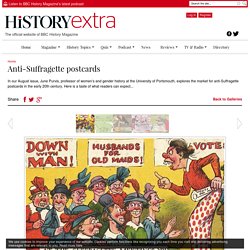 Here is a taste of what readers can expect... The ugly, embittered spinster © June Purvis Rank and file suffragettes were most frequently portrayed as ugly, flat-footed, emotionally embittered and man-hating spinsters, as in this postcard titled ‘At the Suffragette Meetings You Can Hear Some Plain Things – and See Them Too!’ About the images As the women’s suffrage movement gained momentum in the early 20th century, the picture postcard industry was utilised to denigrate women fighting for the vote. A Brief History of Period Panties. Votes for Women! 7 Vintage Suffrage Valentines. Reprinted with permission from the League of Women Voters. 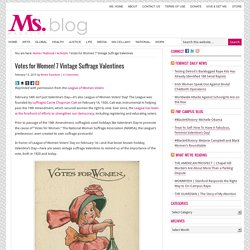 Vanligaste namnen i våldtäktsmål. 10 Queer Women Who Changed History. Radical Histories: From Sojourner Truth’s ‘Ain’t I A Woman?’ to FDA Approval of the Birth Control Pill. Do you know the key moments in the struggle for gender equality? 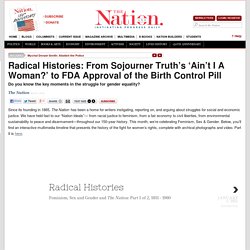 April 7, 2015 Since its founding in 1865, The Nation has been a home for writers instigating, reporting on, and arguing about struggles for social and economic justice. We have held fast to our “Nation Ideals”— from racial justice to feminism, from a fair economy to civil liberties, from environmental sustainability to peace and disarmament—throughout our 150-year history. This month, we’re celebrating Feminism, Sex & Gender. Below, you’ll find an interactive multimedia timeline that presents the history of the fight for women’s rights, complete with archival photographs and video. Amelia Earhart prenup from the 1930′s lays out a pretty darn modern vision of marriage. Wondering what a feminist icon living in the earlier half of the 1900’s thought about love and marriage? 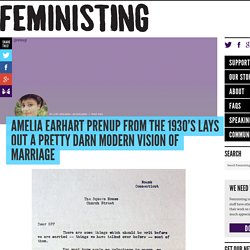 Look no further than the document above, a letter from Earhart to her future husband George Putnam. You’ll remember Earhart became famous as the first female aviator to fly a solo transatlantic flight, redefining expectations of women along the way. Atria. Kvinnohistoria: Äntligen myndig! - UR.se. Radicalizing Cathedrals Way Before Pussy Riot: Meet The Top 10 Feminist Saints. (Disclaimer: I’m atheist-ish, but my mom is Catholic and I was baptized Lutheran, so I’ve got that going for me.) 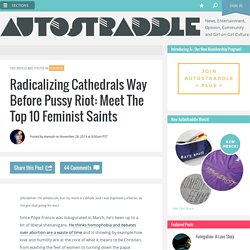 Since Pope Francis was inaugurated in March, he’s been up to a lot of liberal shenanigans. He thinks homophobia and debates over abortion are a waste of time and is showing by example how love and humility are at the core of what it means to be Christian, from washing the feet of women to turning down the papal apartment. Four for you, Pope Francis. You go, Pope Francis. 10 intriguing female revolutionaries that you didn’t learn about in History class. We all know male revolutionaries like Che Guevara, but history often tends to gloss over the contributions of female revolutionaries that have sacrificed their time, efforts, and lives to work towards burgeoning systems and ideologies. 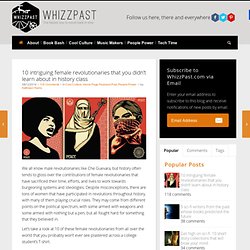 Despite misconceptions, there are tons of women that have participated in revolutions throughout history, with many of them playing crucial roles. The Prince is Actually a Female (and other gender misconceptions) About a month ago, archaeologists found a sealed rock cut tomb in Tarquinia. 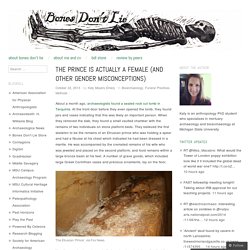 At the front door before they even opened the tomb, they found jars and vases indicating that this was likely an important person. When they removed the slab, they found a small vaulted chamber with the remains of two individuals on stone platform beds. They believed the first skeleton to be the remains of an Etruscan prince who was holding a spear and had a fibulae at his chest which indicated he had been dressed in a mantle. He was accompanied by the cremated remains of his wife who was jeweled and placed on the second platform, and food remains within a large bronze basin at his feet. A number of grave goods, which included large Greek Corinthian vases and precious ornaments, lay on the floor. The Etruscan ‘Prince’, via Fox News. 52 Powerful Photos Of Women Who Changed History Forever.

15 Trailblazing Women and How They Made the Internet. Another day in the world, another diversity report from a tech company that is overwhelmingly not diverse. 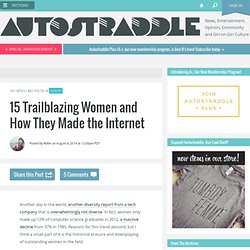 In fact, women only make up 12% of computer science graduates in 2012, a massive decline from 37% in 1985. Watch Makers: Women Who Make America Online. A personalized PBS video experience is only a few clicks away. 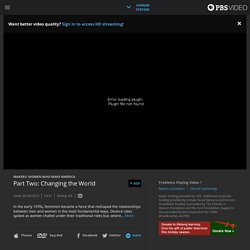 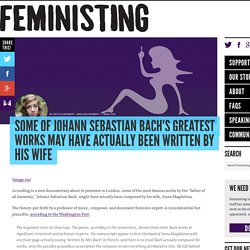 The theory–put forth by a professor of music, composer, and document forensics expert–is circumstantial but plausible, according to the Washington Post. The argument rests on three legs: The pieces, according to the researchers, deviate from other Bach works in significant structural and technical respects; the manuscripts appear to be in the hand of Anna Magdalena with one front page actually saying “written by Mrs Bach” in French; and there is no proof Bach actually composed the works, only the possibly groundless assumption the composer wrote everything attributed to him. He left behind few personal papers, which might aid in documenting his work. Rebel Girls: The Totally Badass Suffrage Exploits of Yore That Gave Us Today’s Voting Rights. Proggposters - Kvinnorörelsen. Nu är det snart jul igen och då är det dags att plocka fram halmbocken och det salta fläsket för så har det alltid sett ut.