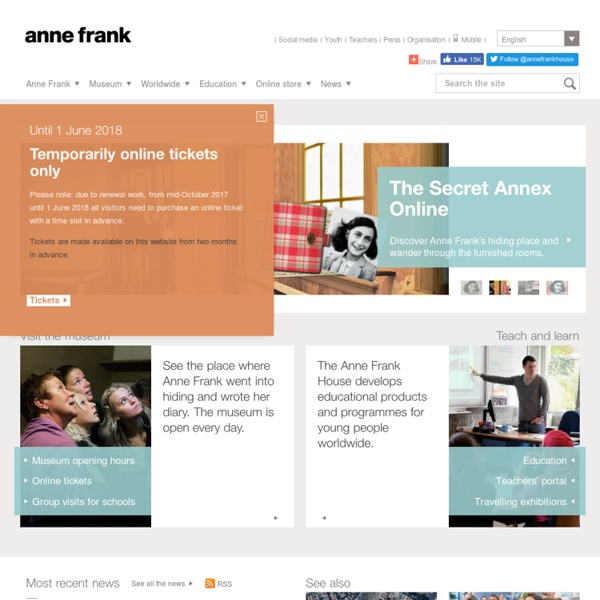 The kids who lived and drew the Holocaust (…read in spanish) Subscribe to Kurioso in english Terezín was the nazi concentration camp located at Prague’s outskirts. The “Lobby of the hell” was the last stop for 150.000 Jews and 15.000 kids and pre-teenagers. HyperWar: World War II on the World Wide Web The content of HyperWar consists primarily of official documents produced by various agencies of the United States, United Kingdom and British Commonwealth governments. All documents produced by the U.S. government are "born" in the public domain (free of copyright restrictions). Documents produced by the U.K. and Commonwealth governments are protected by Crown Copyright, however, Her Majesty graciously permits reproduction 50 years after publication provided only that an acknowledgment of the Crown's copyright is included. Original (non-government) content, created by HyperWar or contributed from the public, are offered without restrictions for personal or educational uses.

An Introductory History of the Holocaust The Holocaust (also called Ha-Shoah in Hebrew) refers to the period from January 30, 1933 - when Adolf Hitler became chancellor of Germany - to May 8, 1945, when the war in Europe officially ended. During this time, Jews in Europe were subjected to progressively harsher persecution that ultimately led to the murder of 6,000,000 Jews (1.5 million of these being children) and the destruction of 5,000 Jewish communities. These deaths represented two-thirds of European Jewry and one-third of all world Jewry. The Jews who died were not casualties of the fighting that ravaged Europe during World War II. Rather, they were the victims of Germany's deliberate and systematic attempt to annihilate the entire Jewish population of Europe, a plan Hitler called the “Final Solution” (Endlosung).

Anne Frank House: New Perspective on Anne Frank’s Arrest Research conducted by the Anne Frank House contributes a new perspective on Anne Frank's arrest. Not the familiar question 'Who betrayed Anne Frank?' was asked, but instead 'Why did the raid on the Secret Annexe take place, and on what information was it based?' This study presents new findings: possibly illegal employment and ration-coupon fraud played a role in the raid on 263 Prinsengracht and led to the discovery and arrest of Anne Frank. Friday, December 16, 20168:30 PMAmsterdam Eight

Children’s Drawings from the Terezín The exhibition is on the first floor of the Pinkas Synagogue The story of children deported to the Terezín ghetto Comprised of 19 sections, this exhibition outlines the story of Jewish children deported to the Terezín ghetto during the Second World War. In 1941–1945, Terezín served as a way station to the concentration and death camps in the east. Stone & Stone Second World War Books: Armies of the Second World War "Armies of the Second World War" is an online database of day-by-day orders of battle and information about hundreds of division, brigade, and regiment-sized units in World War II. Information currently available in the database covers Commonwealth, Dominion, Colonial, Exile, and "Minor" Allied armies in Europe, Africa, and western Asia from 1 September 1939 through 7 May 1945. As time permits, we hope to continue adding additional information for more units, more armies, and more theaters. We're always glad to receive comments, corrections, and additions for the database, but we are unfortunately not able to respond to questions about which armies will be included in the database and when the information will become available.

Holocaust Martyrs Forest – Anne Frank Memorial - KKL JNF – Keren Kayemeth LeIsrael – Jewish National Fund KKL-JNF, together with World B'nai Brith, began planting the Martyrs Forest, which extends on both sides of Kesalon River in the Jerusalem Hills, in 1951. The forest is a silent, powerful and natural memorial to the millions of Jews who perished in the Holocaust. In the forest stand six million trees – one for every Jew who was killed – a living, breathing memorial to the people whose lives were brutally cut short. At its heart stands the famed "Scrolls of Fire" memorial created by the well-known sculptor Nathan Rapaport chronicling the events of the Holocaust in Europe and the revival of the State of Israel. Anne Frank Memorial at the Martyrs Forest. Photo: Yossi Zamir, KKL-JNF Jerusalem

Children's Diaries during the Holocaust Key Facts —Only a small number of millions of children persecuted during the Holocaust wrote diaries and journals that have survived. —Each diary reflects a fragment of its author's life. —Taken together, the diaries provide readers with a varied and complex view of young people who lived and died during the Holocaust. Background The Remarkable, War-Torn, Spacefaring History of the Slinky The toy became a national phenomenon by the 1950s. But as the decade wore on, James's personal interest in the business waned. He became enthralled with a religious cult in Bolivia, and he began donating money to the group shortly after. One morning in 1960, James told his family he was moving to Bolivia to join the cult and serve as a missionary. All were welcome to join him, but his family—Betty and six children—chose to remain in Pennsylvania. After James left for Bolivia, the Slinky rested solely in Betty's hands.