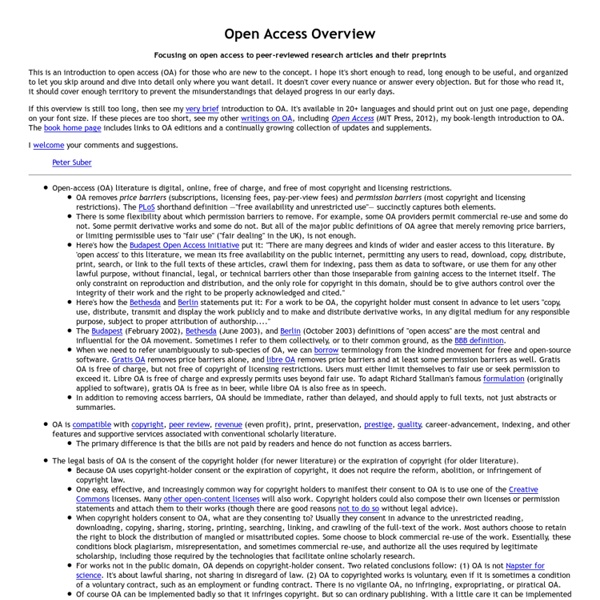 Open access science news is mostly good, with a bit of ugly To see the papers that describe the latest science results, you need to have a subscription to the journals they're published in (or at least your library does). That leaves most of the public, and even many scientists, on the wrong side of a paywall from knowing the latest goings on in their fields. To help speed the flow of scientific information, the National Institutes of Health has mandated a policy where any papers derived from research it funds are made public within a year of their publication; the Obama administration is now trying to expand that policy so it covers all federal agencies. Meanwhile, lots of journals have been founded that are open access from the start—as soon as a paper is available, anyone can download a copy.

Secrecy News The number of chronically homeless persons in the U.S. dropped from more than 120,000 in 2008 to around 84,000 in 2014, a new report from the Congressional Research Service notes. The federal government has undertaken to end chronic homelessness by 2017. “One of the reasons that federal programs have devoted resources to ending chronic homelessness […] Read More The national census in 2020 will be the first to rely primarily on the Internet for collecting census data, thereby creating new avenues for fraud and disruption. A new report from the JASON scientific advisory panel describes the problem and outlines some solutions.

A stateless language that Europe must embrace The language policy in the European Union is both ineffective and hypocritical, and its ideas of linguistic equality and multilingualism are costly and cumbersome illusions. Why have these illusions been kept up for so long? First, because the French with their traditionally superior position in Europe cannot accept the decline of their own linguistic power, second, because the politically-correct ideologies of some sociolinguists constantly fuel opposition against the idea of English as a European lingua franca and third, because powerful translators' lobbies fight for their raison d'tre. In the name of the high ideal of linguistic equality a time-consuming, expensive and increasingly intractable translation machinery is maintained that is doing its best to translate the illusion of equality into illusions of multilingualism and translatability.

CIA Accountability Hits New Lows - Fir In a virtually unnoticed exchange on February 3, Congressman Peter Hoekstra (R-MI) called the CIA to task for its incredibly ham-fisted handling of an April 20, 2001 incident in Peru. In collaboration with a CIA aircrew working as part of a joint program to interdict drug trafficking, the Peruvian air force shot down a plane carrying an American missionary family, killing two. In an angry tone, the Republican congressman denounced the CIA’s response, released the actual film of the incident, and triggered an official statement from the agency — conveniently left off the CIA website to attract as little attention as possible. This episode is important as part of the continuing effort to bring accountability to CIA operations.

We Can Put an End to Word Attachments by Richard M. Stallman Don't you just hate receiving Word documents in email messages? Senior finds imperfection in supercollider detector Xiaohang Quan ’09 was working on her senior thesis when she found a miscalculation in a detector attached to the world’s largest particle accelerator. Quan, a physics concentrator, traveled to Geneva, Switzerland, last week with physics professors Christopher Tully GS ’98, Jim Olsen and Daniel Marlow for the annual meeting of the European Organization for Nuclear Research (CERN). This year, however, they also came to discuss Quan’s discovery with the designers of the hardware for the Compact Muon Solenoid (CMS) experiment, which, as part of the Large Hadron Collider (LHC), has the potential to revolutionize particle physics. In the hardware used to record and capture events in the LHC, she discovered errors that were leading to the appearances of double images because of particle streams known as jets. Quan’s thesis focuses on the various jet selection criteria for the LHC and finding which algorithms will be most efficient for analysis of the physics.

Clinton PDDs and PRDs I somehow missed the fact that the Clinton Library has posted online six declassified Presidential Decision Directives (PDD) and two Presidential Review Directives, most of which involve nuclear weapons, ballistic missile defense and space policy. PDD-17: U.S. Policy on Ballistic Missile Defenses and the Future of the ABM Treaty PDD-23: US Policy on Foreign Access to Remote Sensing Space Capabilities PDD-25: U.S. Are Academics Different? Last week’s column about Denis Rancourt, a University of Ottawa professor who is facing dismissal for awarding A-plus grades to his students on the first day of class and for turning the physics course he had been assigned into a course on political activism, drew mostly negative comments. The criticism most often voiced was that by holding Rancourt up as an example of the excesses indulged in by those who invoke academic freedom, I had committed the fallacy of generalizing from a single outlier case to the behavior of an entire class “Is the Rancourt case one of a thousand such findings this year, or it the most outlandish in 10 years?” (Jack, No. 88). It may be outlandish because it is so theatrical, but one could argue, as one reader seemed to, that Rancourt carries out to its logical extreme a form of behavior many display in less dramatic ways. Statements like this are likely to provoke the objection that “Academe should not be a Business or a Corporation” (No. 228, G.

Declassified/Released Document Collections Keystone Pipeline Project Ronald Reagan’s June 12, 1987 Speech at the Brandenburg Gate Korean Air Flight 858 February 15, 2006 draft memorandum by Counselor of the Department Philip Zelikow Re: The McCain Amendment and U.S. Obligations under Article 16 of the Convention Against Torture Frequently Requested Contracts Rwandan Declassification Collection How some military rabbis are trying to radicalize Israeli soldiers. - By Christopher Hitchens Recent reports of atrocities committed by Israeli soldiers in the course of the intervention in Gaza have described the incitement of conscripts and reservists by military rabbis who characterized the battle as a holy war for the expulsion of non-Jews from Jewish land. The secular Israeli academic Dany Zamir, who first brought the testimony of shocked Israeli soldiers to light, has been quoted as if the influence of such extremist clerical teachings was something new. This is not the case. Christopher Hitchens (1949-2011) was a columnist for Vanity Fair and the author, most recently, of Arguably, a collection of essays. I remember being in Israel in 1986 when the chief army "chaplain" in the occupied territories, Rabbi Shmuel Derlich, issued his troops a 1,000-word pastoral letter enjoining them to apply the biblical commandment to exterminate the Amalekites as "the enemies of Israel."

Peter Suber defines Open Access (from 2004 and revised 2013) in a textbook manner peppered with links of OA journals and organizations. by katrinahsmith Mar 4