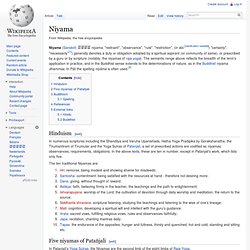 [clarification needed]) "certainly", "necessarily"[1]) generally denotes a duty or obligation adopted by a spiritual aspirant (or community of same), or prescribed by a guru or by scripture (notably, the niyamas of raja yoga). The semantic range above reflects the breadth of the term's application in practice, and in the Buddhist sense extends to the determinations of nature, as in the Buddhist niyama dhammas.

1Hri. What does living virtuously mean to Hindus? 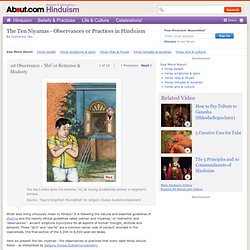 It is following the natural and essential guidelines of dharma and the twenty ethical guidelines called 'yamas' and 'niyamas,' or 'restraints' and 'observances' - ancient scriptural injunctions for all aspects of human thought, attitude and behavior. 2Santosha. Santosha (skt. 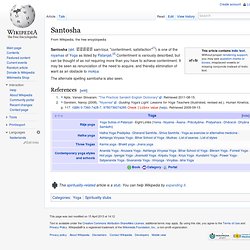 संतोष saṃtoṣa, "contentment, satisfaction"[1]) is one of the niyamas of Yoga as listed by Patanjali.[2] Contentment is variously described, but can be thought of as not requiring more than you have to achieve contentment. It may be seen as renunciation of the need to acquire, and thereby elimination of want as an obstacle to mokṣa. 3Dāna.

Dāna or Daana (Pāli, Sanskrit: दान dāna) is generosity or giving, a form of alms. 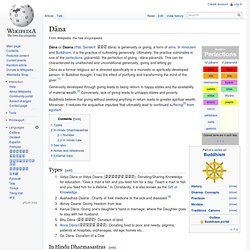 In Hinduism and Buddhism, it is the practice of cultivating generosity. Ultimately, the practice culminates in one of the perfections (pāramitā): the perfection of giving - dāna-pāramitā. This can be characterized by unattached and unconditional generosity, giving and letting go. Dāna as a formal religious act is directed specifically to a monastic or spiritually-developed person.

4Āstika. 4nāstika. 5Ishvarapujana. The ten niyamas - the observances or practices that every ideal Hindu should follow - as interpreted by Satguru Sivaya Subramuniyaswami. 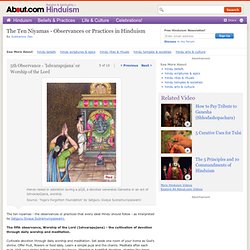 The fifth observance, Worship of the Lord (Ishvarapujana) - the cultivation of devotion through daily worship and meditation. Cultivate devotion through daily worship and meditation. Set aside one room of your home as God’s shrine. Offer fruit, flowers or food daily. Learn a simple puja and the chants. Reproduced with permission from Himalayan Academy Publications. 6Siddhanta Sravana. The ten niyamas - the observances or practices that every ideal Hindu should follow - as interpreted by Satguru Sivaya Subramuniyaswami. 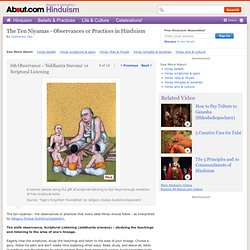 The sixth observance, Scriptural Listening (siddhanta sravana) - studying the teachings and listening to the wise of one's lineage. Eagerly hear the scriptures, study the teachings and listen to the wise of your lineage. Choose a guru, follow his path and don’t waste time exploring other ways. Read, study, and above all, listen to readings and dissertations by which wisdom flows from knower to seeker. Avoid secondary texts that preach violence. Reproduced with permission from Himalayan Academy Publications. 7Mati. The ten niyamas - the observances or practices that every ideal Hindu should follow - as interpreted by Satguru Sivaya Subramuniyaswami. 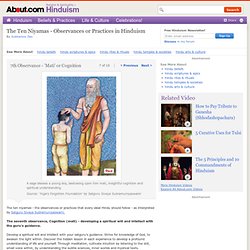 The seventh observance, Cognition (mati) - developing a spiritual will and intellect with the guru's guidance. Develop a spiritual will and intellect with your satguru’s guidance. Strive for knowledge of God, to awaken the light within. Discover the hidden lesson in each experience to develop a profound understanding of life and yourself. 7Vrata. In the context of Hinduism and Hindu mythology, the term vrata (pronunciation: vrat or brat) denotes a religious practice to carry out certain obligations with a view to achieve divine blessing for fulfillment of one or several desires. 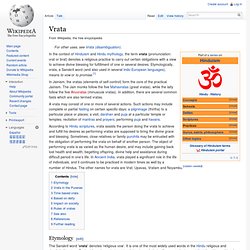 Etymologically, vrata, a Sanskrit word (and also used in several Indo-European languages), means to vow or to promise.[1] Puranas. Origins[edit] Vyasa, the narrator of the Mahabharata, is traditionally considered the compiler of the Puranas.[4] The date of the production of the written texts does not define the date of origin of the Puranas.[5] On one hand, they existed in some oral form before being written[5] while at the same time, they have been incrementally modified well into the 16th century.[5][6] An early reference is found in the Chandogya Upanishad (7.1.2). 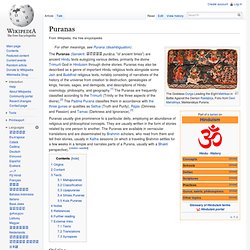 (circa 500 BCE). The Brhadaranyaka Upanishad refers to purana as the "fifth Veda",[7] itihāsapurāṇaṃ pañcamaṃ vedānāṃ, reflecting the early religious importance of these facts, which over time have been forgotten and presumably then in purely oral form. 9Japa. Japa (Sanskrit: जप) is a spiritual discipline involving the meditative repetition of a mantra or name of a divine power. 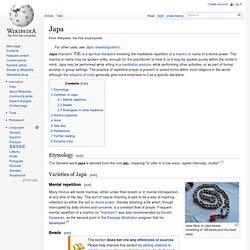 The mantra or name may be spoken softly, enough for the practitioner to hear it, or it may be spoken purely within the reciter's mind. Japa may be performed while sitting in a meditation posture, while performing other activities, or as part of formal worship in group settings. The practice of repetitive prayer is present in varied forms within most religions in the world, although the religions of India generally give more emphasis to it as a specific discipline. Etymology[edit] 10Tapas. Tapasya - Jain meditation in progress.[1] Tapas (tapas, Sanskrit: तपस्) means deep meditation,[2] effort to achieve self-realization, sometimes involving solitude, hermitism or asceticism;[3][4] it is derived from the word root tap (Sanskrit: तप् or ताप) which depending on context means "heat" from fire or weather, or blaze, burn, shine, penance, pain, suffering, mortification.[5][6][7] In the yogic tradition it is the fire that burns within that is needed for the sanyasi to achieve the very difficult goal of enlightenment, to foster self-control, one mindedness and focus, simplicity, wisdom, integrity.