Constantine the Great. The age of Constantine marked a distinct epoch in the history of the Roman Empire.[5] He built a new imperial residence at Byzantium and named it New Rome. 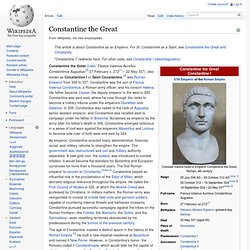 Crisis of the Third Century. Mariano Sigman: Your words may predict your future mental health. Tom Holland tells NT Wright: Why I changed my mind about Christianity. Battle of the Imperial Pretenders. POLITICS-It took the Roman Republic five centuries to devolve into a centralized despotism. 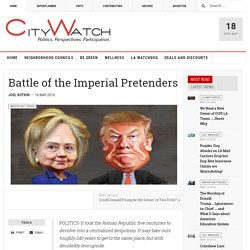 It may take ours roughly 240 years to get to the same place, but with decidedly less upside.Concern over a crossing of a constitutional Rubicon – the northern Italian river whose passage by Julius Caesar and his legion in 49 B.C. occasioned the death of the Republic – has centered on Donald Trump. The Donald might not have conquered Gaul, or written a brilliant account of his exploits, but his Caesarist attributes – overweening self-regard, contempt for existing institutions and a touch of glamour – are all too obvious.No surprise, then, that some on the left, perhaps rehearsing their roles as cheerleaders for Hillary Clinton, see Trump as a “tyrant” – a Caesar in training. This animated map shows how religion... - Business Insider.

Water’s role in the rise and fall of the Roman Empire. Smart agricultural practices and an extensive grain-trade network enabled the Romans to thrive in the water-limited environment of the Mediterranean, a new study shows. 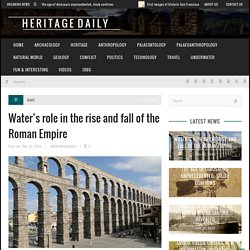 But the stable food supply brought about by these measures promoted population growth and urbanisation, pushing the Empire closer to the limits of its food resources. The research, by an international team of hydrologists and Roman historians, is published today in Hydrology and Earth System Sciences, an open access journal of the European Geosciences Union (EGU). Stretching over three continents and persisting for many centuries, the Roman Empire was home to an estimated 70 million people. In such a vast area ensuring a stable food supply was no easy task, particularly given the variable and arid climate of the Mediterranean region. So how did the Romans maintain reliable food supplies to their cities for centuries under such challenging conditions?

The punctuated collapse of the Roman Empire. I defined as the "Seneca Cliff" the tendency of some systems to collapse after having peaked. 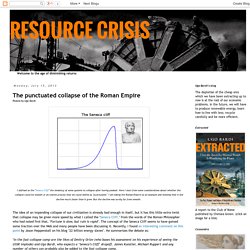 Here I start from some considerations about whether the collapse could be smooth or an uneven process that we could define as "punctuated. " I am taking the Roman Empire as an example and showing that it did decline much faster than it grew. But the decline was surely far from smooth. The idea of an impending collapse of our civilization is already bad enough in itself, but it has this little extra-twist that collapse may be given more speed by what I called the "Seneca Cliff," from the words of the Roman Philosopher who had noted first that, "Fortune is slow, but ruin is rapid".

The concept of the Seneca Cliff seems to have gained some traction over the Web and many people have been discussing it. Roman%20Citizenship-1. Ethnic Cleansing is Sanctioned by the God of the Old Testament. While Israel is engaged in a program of ethnic cleansing in Gaza, and Ann Coulter and other conservatives, including House Republicans, embrace the idea of a similar program here, through deportation if not outright slaughter, we would do well here to recall that this is not the first time Israel has engaged in these activities. 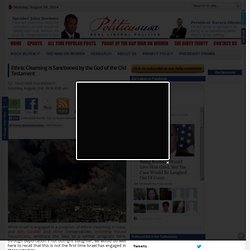 There is, for example, the Hasmonean Jewish treatment of Pagan minorities within their borders in the late second century BCE: ethnic cleansing, expulsion (1 Macc 13.47) which often goes unremarked in the historical record: forced conversion, etc., events which must have been well-remembered in Tacitus’ day (these conquests were also noted by Strabo, Geography 16.2.37). The Bible, of course, condones ethnic cleansing. It is an activity ordered by God himself on numerous occasions. Whose Radical Jesus? The Story of a Literary Success. Zealot: The Life and Times of Jesus of Nazareth, By Reza Aslan (Random House, 2013) (Image: Random House)A better title for this best seller would be: Jesus Against Empire. 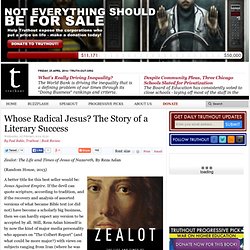 If the devil can quote scripture, according to tradition, and if the recovery and analysis of assorted versions of what became Bible text (or did not) have become a scholarly big business, then we can hardly expect any version to be accepted by all. Still, Reza Aslan himself is by now the kind of major media personality who appears on "The Colbert Report" (and what could be more major?)

With views on subjects ranging from Iran (where he was born) to the silliness of Fox News on Christmas. Get Zealot from Truthout today. The Fate of Empires. By Professor Steven Yates May 10, 2014 NewsWithViews.com “Frannie,” he said, and turned her around so he could look into her eyes. 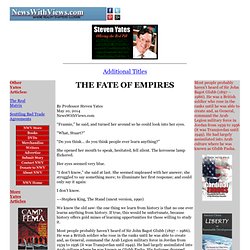 “What, Stuart?” “Do you think… do you think people ever learn anything?” She opened her mouth to speak, hesitated, fell silent. The kerosene lamp flickered. Her eyes seemed very blue. “I don’t know,” she said at last. I don’t know.