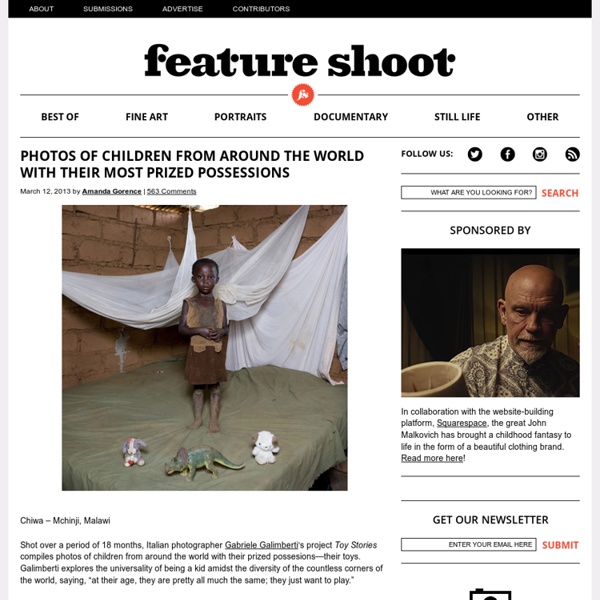 Chiwa – Mchinji, Malawi Shot over a period of 18 months, Italian photographer Gabriele Galimberti‘s project Toy Stories compiles photos of children from around the world with their prized possesions—their toys. Galimberti explores the universality of being a kid amidst the diversity of the countless corners of the world, saying, “at their age, they are pretty all much the same; they just want to play.” But it’s how they play that seemed to differ from country to country. Galimberti found that children in richer countries were more possessive with their toys and that it took time before they allowed him to play with them (which is what he would do pre-shoot before arranging the toys), whereas in poorer countries he found it much easier to quickly interact, even if there were just two or three toys between them. There were similarites too, especially in the functional and protective powers the toys represented for their proud owners. Stella – Montecchio, Italy Pavel – Kiev, Ukraine

25 Stunning Portraits of Black Women in Fantasy Photography Fantasy photography is a captivating genre. It allows us to get lost in another world—one of ethereal characters, amazing costuming, and breathtaking settings. But if you’ve spent any time admiring these surreal works, you might’ve noticed that they predominantly feature white people. Black women are often left out of the spotlight, even though they, too, are creating stunning images worthy of praise. Twitter user @btsanima is helping to call attention to Black women appearing in fantasy photography. The 27 Incredible Once In A Lifetime Shots Posted by admin on Apr 3, 2013 in Gallery | 47 comments Today we collect photos that we can see only one in lifetime and that if we had a luck to see it. These are the photos which we must save and enjoy in them all the time, because they are moment of an amazing history. List of the 30 incredible once in a lifetime shots is something that we will love and enjoy every day.

"This is how I ride" by Arnov Setyanto Random photo Submit your photo Stumble Thru 10 Pics Of People Before And After They Were Asked To Smile (New Pics) The Dalai Lama said, "A simple smile. That’s the start of opening your heart and being compassionate to others." Smiles have the ability to change one's whole day, and not only to the one that's smiling, but also to those who see a smile. It's just a simple expression, and yet it may be the most powerful, as it's the most positive one. Jay Weinstein tests this idea in his project "so I asked them to smile" with an extremely diverse group of people, and the answer behind each and every one of his pictures is that a smile changes everything—not only the mood, but even the whole picture.

Dancers among us “The inspiration for this book came to me one afternoon as I watched my son, Hudson, playing with his toy bus. I was trying to keep pace with his three-year-old mind as he got deeper and deeper into a fantasy involving nothing more than a yellow plastic box and armless figurines. At least that’s what I saw. “Spring-Autumn” by Qozop For a series titled “Spring-Autumn,” photographer Qozop, snapped photos of hip, twenty-somethings with their elders, either a parent or a grandparent. Then the two family members exchanged outfits and had their photo taken again. The comparisons are as sweet as they are intriguing… I could see this becoming a bit of a trend. Anyone want to go visit their grandparents with a camera now?

Impressive Portraits Of Indigenous Tribes Photographed By Alexander Khimushin During His 3year Project in Siberia Currently living in Australia the Russian ethnographic photographer Alexander Khimushin traveled to more than 80 countries where he implemented different projects of photographing vanishing cultures. One of his recent projects is the “World in Faces” where he portrayed indigenous people and their impressive and inspiring traditions. Encountering these people makes his trips more interesting and motivates to new discoveries and projects.

"Switcheroo" by Hana Pesut By Olivia Fleming Published: 16:11 GMT, 14 November 2012 | Updated: 16:21 GMT, 15 November 2012 A Canadian photographer has given the term 'boyfriend jeans' a whole new meaning. Hana Pesut, 30, has been photographing couples, friends and family in their own outfits, and then again in each other's, since 2010 for a book project called Switcheroo. Beautiful Dog Portraits Capture Their Adventures in the Great Outdoors This post may contain affiliate links. If you make a purchase, My Modern Met may earn an affiliate commission. Please read our disclosure for more info. Many dog owners would agree that there’s no other friend quite like a faithful canine. This includes 21-year-old Czech Republic-based traveler and dog photographer Kristýna Kvapilová who spends her spare time exploring the world with her beautiful 7-year-old Australian Shepherd, Charlie. Come rain, snow, or shine, the adventurous duo never miss out on exploring what Mother Nature has to offer, always with Kvapilová’s trusty Canon 5D Mark IV camera in hand.

"A Chronicle of French Hipsters" by Theo Gosselin A Chronicle of French Hipsters Posted by Morrison Conway on August 6, 2012 · 74 Comments Theo Gosselin is an amateur photographer from Paris. Pet Pig Grows up with Dogs and Thinks He's Just Like His Canine Crew As the old saying goes, “a dog is a man’s best friend,” but this pet pig might disagree. Meet Chowder, the 6-year-old Vietnamese potbellied pig who has his own group of unlikely animal friends. The domesticated farm animal lives with five rescue pups—named Rika, Slick, Nya, James, and Bashe—and his human, Shelby Madere, in Southern California. Animals Illuminated by the Sun The time of sunset is defined in astronomy as the moment when the trailing edge of the Sun’s disk disappears below the horizon in the west. There are few things in nature as photogenic as the sky at sunset, especially animals. The rich bright gold, pink and orange colors make unusually beautiful pictures of animals illuminated by the sun.