1970s Youth Captured By High School Teacher. 13 side-by-side portraits of people over 100 with their younger selves. Albino Twins From Brazil Are Taking The Fashion Industry By Storm With Their Unique Beauty. Lara and Mara Bawar are not your average supermodels, but their striking appearance is sending shockwaves through the fashion industry. 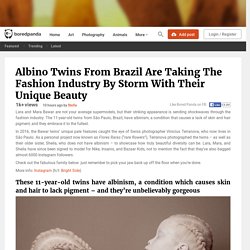 The 11-year-old twins from São Paulo, Brazil, have albinism, a condition that causes a lack of skin and hair pigment, and they embrace it to the fullest. Show Full Text In 2016, the Bawar twins’ unique pale features caught the eye of Swiss photographer Vinicius Terranova, who now lives in São Paulo. Amazing photographs reveal the lost world of the Omo tribes of Ethiopia. Photographs published in new book 'Natural Fashion: Tribal Decoration from Africa' With large eyes staring out behind his brilliantly painted face this young child is a proud member of one of east Africa's most fascinating tribal groups. 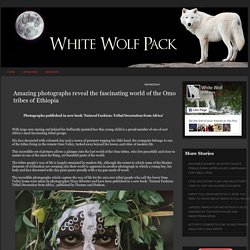 His face decorated with coloured clay and a crown of greenery topping his little head, the youngster belongs to one of the tribes living in the remote Omo Valley, tucked away beyond the towns and cities of modern life. This incredible set of pictures allows a glimpse into the lost world of the Omo tribes, who live peacefully and close to nature in one of the most far flung, yet beautiful parts of the world. 10+ Animals That Look Like They’re About To Drop The Hottest Albums Of The Year.

By Michael Nash Warsaw, 1946. Photographer Tracks Down People He Snapped In His Hometown Almost 40 Years Ago To Recreate The Remarkable Images. Photo © by Chris Porsz/Geoff Robinson Paramedic Chris Porsz spent hours walking around the city of Peterborough, Cambridgeshire (Great Britain) in the late 1970s and 80s, taking candid shots of punks and policemen, siblings and sweethearts, traders and teenagers. 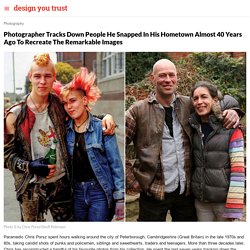 An Elderly Couple Took The Same Photo Every Season. But Nothing Could Prepare Me For The Last One. The saying “a picture is worth a thousand words” for a reason. 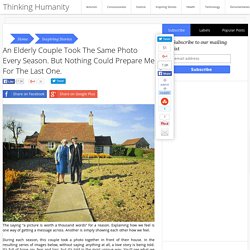 Explaining how we feel is one way of getting a message across. Another is simply showing each other how we feel. During each season, this couple took a photo together in front of their house. In the resulting series of images below, without saying anything at all, a love story is being told. Rare 100 year Old Indian Photos. Nearly all of today's Native Americans in North, Central, and South America can trace part of their ancestry to six women whose descendants immigrated around 20,000 years ago, a DNA study suggests. 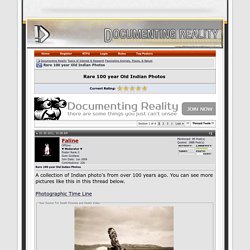 Those women left a particular DNA legacy that persists to today in about about 95 percent of Native Americans, researchers said. The finding does not mean that only these six women gave rise to the migrants who crossed into North America from Asia in the initial populating of the continent, said study co-author Ugo Perego. The women lived between 18,000 and 21,000 years ago, though not necessarily at exactly the same time, he said. The work was published this week by the journal PLoS One. These 100-Year-Old Colour Portraits Of New York Immigrants Reveal Incredible Outfits - BuzzFeed News. A man studied photography in prison. These are the photos he took when he got out. When Donato Di Camillo was a kid, his family couldn't afford film for their Polaroid camera. 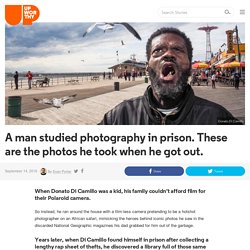 So instead, he ran around the house with a film-less camera pretending to be a hotshot photographer on an African safari, mimicking the heroes behind iconic photos he saw in the discarded National Geographic magazines his dad grabbed for him out of the garbage. Years later, when Di Camillo found himself in prison after collecting a lengthy rap sheet of thefts, he discovered a library full of those same magazines.

While other inmates were working out or getting into trouble, he poured over old issues of National Geographic, Life, and Time. He was in pure awe of the photography their pages held inside. Criticisms of photographer Jimmy Nelson's "Before They Pass Away" Davi Kopenawa, spokesman of the Yanomami tribe in Brazil and known as the “Dalai Lama of the Rainforest”: I saw the photos and I didn’t like them. 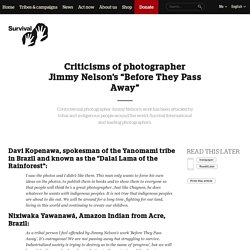 This man only wants to force his own ideas on the photos, to publish them in books and to show them to everyone so that people will think he’s a great photographer. Just like Chagnon, he does whatever he wants with indigenous peoples. It is not true that indigenous peoples are about to die out. We will be around for a long time, fighting for our land, living in this world and continuing to create our children. Mindblowing Photographs Of The Last Surviving Tribes On Earth. Reading Time: 4 minutes Photographer Jimmy Nelson spent the past three years exploring the most remote places on Earth to capture mindblowing photographs of the last surviving tribes on Earth. 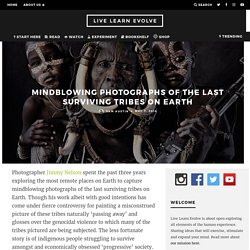 Though his work albeit with good intentions has come under fierce controversy for painting a misconstrued picture of these tribes naturally ‘passing away’ and glosses over the genocidal violence to which many of the tribes pictured are being subjected. The less fortunate story is of indigenous people struggling to survive amongst and economically obsessed ‘progressive’ society. Extraordinary Black And White Portraits Of Celebrities Taken By Irving Penn » Design You Trust. Design, Culture & Society. Isabella Rossellini Best known for his fashion photography, Penn’s repertoire also includes portraits of creative greats; ethnographic photographs from around the world; Modernist still lifes of food, bones, bottles, metal, and found objects; and photographic travel essays. h/t: vintag.es Ingmar Bergman Irving Penn was among the first photographers to pose subjects against a simple grey or white backdrop and he effectively used this simplicity. 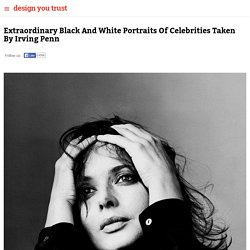 Expanding his austere studio surroundings, Penn constructed a set of upright angled backdrops, to form a stark, acute corner. 91-Year-Old Woman Embraces Life in Profound and Playful Images. These 22 People From Around The World Will Leave You Speechless. Rob MacInnis artwork presented by Katharine Mulherin Contemporary Art. This Woman Has Spent The Last 14 Years Photographing The World's Oldest Trees. San Francisco-based photographer Beth Moon has spent the last 14 years in search of the world’s oldest trees. 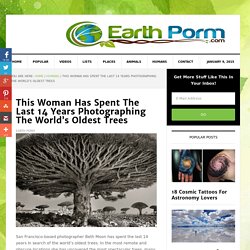 Humanae – fotoprojekt som matchar etnicitet med pantonefärg. Photographer Demonstrates How Beauty Is Indeed in the Eye of the Beholder. I want to be Inspired everyday! Steve McCurry was first attracted to photographing people while on a trip to India. There, he found places and people that were beautiful in their own right, and started exploring. His passion then took him to Europe, South America, and other remote parts of the world. 34 Celebrities Who Share The Same Face. Projet Je ne suis pas un sosie. Photographer Shows Proof of Shocking Similarities In Human Templates Between Complete Strangers. Billions of souls have inhabited Earth, but there have only been about 500 original human templates to choose from throughout human history.

These templates were both a reflection of inner and outer beauty. Many metaphysicians have denied the existence of these templates. A 62-year-old Montreal-based photographer has spent the last 12 years scouring the world for complete strangers who have alarmingly similar physical characteristics. The results, at least in part, support the contention that not only do these templates exist, but sometimes to such a degree that there are other human beings on the planet that look almost identical to others, despite no relation whatsoever.

Ancient Trees: Beth Moon’s 14-Year Quest to Photograph the World’s Most Majestic Trees. Criss-crossing the world with stops on almost every continent, San Francisco-based photographer Beth Moon spent the last 14 years seeking out some of the largest, rarest, and oldest trees on Earth to capture with her camera. Domestic Bliss: Mother Of Two Takes Darkly Humorous Family Photos. Susan Copich, actress and a mother of two from New York, has taken a darkly humorous approach towards traditional family photography with a series of daring images entitled “Domestic Bliss.” Copich spent years taking pictures of her family, but when she reached her mid-forties, she realized that she was missing from almost every photo.

Laurence Demaison - Moving Performances, Still Photographs. These wonderfully quirky and artful photographs are not made with digital tricks. Laurence Demaison plays — delightfully — with film photography and with the idea of photography. Taking full advantage of showing what the camera sees (sometimes over long periods of exposure) compared to what the human eye cannot or does not see, she pre-visualizes each photograph up to a certain degree, and then lets chance and intuitive performance intervene.

The Photographs of This Man And His Daughter Alice Bee Are Totally Fantastic. Ever since his daughter and the love of his life was born back in 2010, photographer Dave Engledow has been taking photos of her. CYJO: Mixed Blood is a series of portraits of individuals and families of mixed races and ethnicities (PHOTOS). Do You Think These People Were Created Equal After Seeing These Photos?