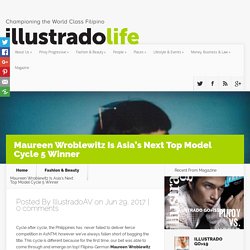 This cycle is different because for the first time, our bet was able to come through and emerge on top! Filipina-German Maureen Wroblewitz competed alongside Vietnam’s bet Minh Tu Nguyen and Malaysia’s rep Shikin Gomez in the finale. 14 hopefuls from all across Asia, 13 episodes and 3 months of anxious uncertainty of who’s still gonna be in the running to become Asia’s Next Top Model. The road wasn’t easy for Maureen (and us fans too!) As she had her low moments in front of the panel and in her stay at the model house too. Illustrado Stuff: Ding Dong, Max's Caramel Bars, Crispy Mushroom Chips, Lucky Me Pancit Canton, Pinoy Spaghetti Mix - Illustrado Magazine - Filipino Abroad.

Here’s a list of the things that we saw, we tried, we liked and loved! 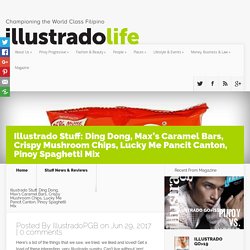 Get a load of these interesting, very Illustrado sundry. Can’t live without ‘em! Artist Spotlight: Ronnie Pascual - Illustrado Magazine - Filipino Abroad. Visual Artist My Art I’m into visual arts – Sketching, Drawing & Painting as well as sharing the skill to the younger generation and even to the adults as a hobby or a preparation for their career path in arts or design related course. 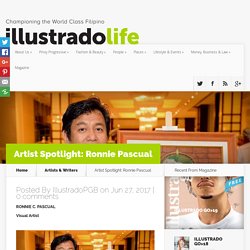 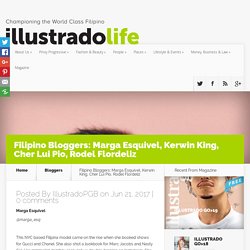 She also shot a lookbook for Marc Jacobs and Nasty Gal. Her minimalist-tomboy look got us double-tapping on Instagram. She is definitely a #GirlBoss in her own right! Kerwin King @kerwinking. Baste Duterte: Through My Eyes - Illustrado Magazine - Filipino Abroad. By Dr. 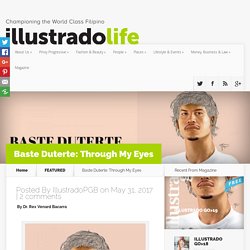 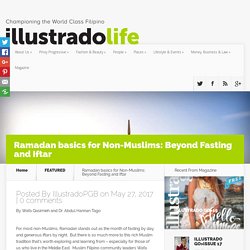 Abdul Hannan Tago For most non-Muslims, Ramadan stands out as the month of fasting by day, and generous iftars by night. But there is so much more to this rich Muslim tradition that’s worth exploring and learning from – especially for those of us who live in the Middle East. Muslim Filipino community leaders Wafa Qasimieh and Dr. About Childhood Atopic Eczema by Dr. Shivani, MBSS, MD. Mastering the Filipino Flavor: MasterChef Australia's John Carasig. Feeling Mayaman: A Sensible Person’s Guide to Modern Luxury. By Nicholo Jallores Sometimes you just gotta feel rich. 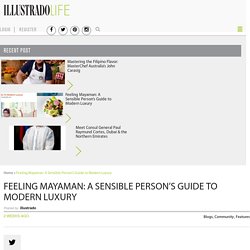 You know how it is. You work like a dog day in and day out, and come payday you just want – no, need – to reward yourself for all of your sacrifice and hard labor. The struggle is real, hence the prize must be as real and tangible. You have to see it, smell it, hear it, hold it tightly in the palm of your hand until you feel in the very core of your being that, yes, you are successful. And then comes the credit card bill. Become a Polyglot on a Budget. By Aileen Adalid One of my dreams is to become a polyglot, a person fluent in multiple languages. 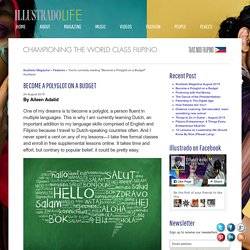 This is why I am currently learning Dutch, an important addition to my language skills comprised of English and Filipino because I travel to Dutch-speaking countries often. And I never spent a cent on any of my lessons—I take free formal classes and enroll in free supplemental lessons online. It takes time and effort, but contrary to popular belief, it could be pretty easy. I also often hear people say that it is difficult for adults to learn a new language, when in fact, scientists say otherwise. So if you are interested in finally learning how to speak Spanish or understand those sexy French phrases you like to hear, then read on to find out about ways on how to learn a new language without breaking the bank. 15 New Year’s Resolutions You Might Never Keep as Long as You Live in the Philippines. Hold it, kababayans! 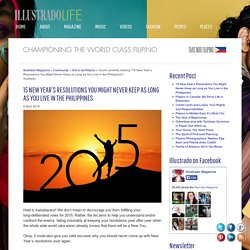 We don’t mean to discourage you from fulfilling your long-deliberated vows for 2015. Rather, the list aims to help you understand and/or confront the enemy: failing miserably at keeping your resolutions year after year when the whole wide world (aka www) already knows that there will be a New You. Okay, it could also give you valid excuses why you should never come up with New Year’s resolutions ever again. Lose weight. The God of Beginnings. By Krip Yuson I like the French word for the first month of the year: Janvier. 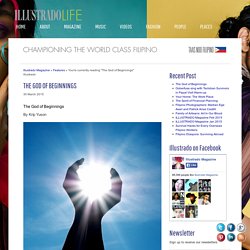 Ooberfuse sing with Tacloban Survivors in Papal Visit Warm-up. TACLOBAN, PHILIPPINES: In advance of Pope Francis’ visit on 17th January 2015 to the survivors of the deadliest tropical storm to hit land-fill, Ooberfuse join 2,000 Haiyan survivors in Tacloban for final rehearsal. Ooberfuse are an electronica band from Woolwich, London – Hal St. John and Filipina lead singer Cherrie Anderson, joined with producer Roland Faber. The band has played as a warm up act to the Pope in front of a live audience of 2 million, performed in the House of Lords. Your Home: The Work Place. By Excel V. Dyquiangco Technology has opened doors of opportunities.

Education, for instance, has taken on a global scale with students learning the ropes while in the comforts of their own homes. Agricultural processes can also be automated nowadays while medical discoveries become rapid and quick, thanks to computers and machines that aid in the research and findings of certain illnesses.

Spearheaded by the Center for International Trade Expositions and Missions (CITEM), the export promotions arm of the Philippine Department of Trade and Industry (DTI), Food Philippines will highlight the country’s halal-certified food products and “power” fruits in its participation in the world’s biggest annual food and hospitality show. Life Makeover: Declutter and make 2015 your best year ever.

Que Horror! In The Classroom Called Life. Most of us have gone through the usual route of getting ourselves an education. You go through primary, high school and then endeavor to complete higher studies to specialize in your favored field. Some of us pursue post graduate degrees or professional courses mainly to further reinforce skills to widen career opportunities. But as we go through the motions of acquiring an education, do we realize that we spend the greater part of our lives mostly focused on merely cultivating technical capacity?

There is nothing wrong about striving to get ourselves a seat at the workplace, but what a pity if we don’t see the bigger point of learning, because truth be known, in the classroom called life, sometimes, we do tend to miss the larger scheme of things. Education has a deeper and more profound purpose than just to earn a living. You educate yourself, because you want to succeed, grow and truly live. Spirit of the Trees.