Top Azure Features - Did You know?

Exercise your greatest power as a developer. To paraphrase Daniel Webster (American Statesman, 1782-1852), “If all my developer skills were taken from me with one exception, I would choose to keep the power of learning like a developer, for by it I would soon regain all the rest.” 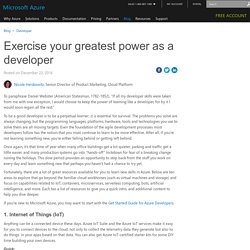 To be a good developer is to be a perpetual learner; it is essential for survival. The problems you solve are always changing, but the programming languages, platforms, hardware, tools and technologies you use to solve them are all moving targets. Even the foundation of the agile development processes most developers follow has the notion that you must continue to learn to be more effective. After all, if you’re not learning something new, you’re either falling behind or getting left behind. Once again, it’s that time of year when many office buildings get a bit quieter, parking and traffic get a little easier, and many production systems go into “hands-off” lockdown for fear of a breaking change ruining the holidays. 1. 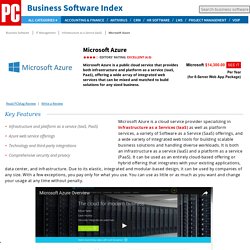 It is both an infrastructure as a service (IaaS) and a platform as a service (PaaS). It can be used as an entirely cloud-based offering or hybrid offering that integrates with your existing applications, data center, and infrastructure. Due to its elastic, integrated and modular-based design, it can be used by companies of any size. OpenAI will use Microsoft's cloud, as Azure gains more features. Microsoft’s continued investment in artificial intelligence and machine learning technology is paying dividends. 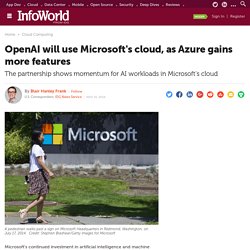 The company has partnered with OpenAI, a non-profit company founded earlier this year to advance the field of machine intelligence for the benefit of humanity. As part of the deal, announced Tuesday, OpenAI will use Microsoft Azure as its primary cloud provider, an important win for Microsoft as it competes with the likes of Amazon, Google, and IBM to power the next generation of intelligent applications.

OpenAI is backed by the likes of Tesla CEO Elon Musk, controversial investor Peter Thiel, LinkedIn co-founder Reid Hoffman, and Y Combinator Partner Jessica Livingston. Introduction to Microsoft Azure. Does Microsoft Azure make sense for developers? Hooks into Azure and Office 365 are appearing in all Microsoft products, from Windows to Office to server applications such as SQL Server. 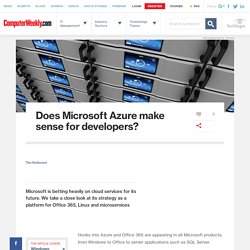 In the mobile realm, the company is pulling back from its Windows Phone efforts in favour of a platform-neutral approach that encourages developers to use Azure for back-end services supporting mobile applications. By submitting your personal information, you agree that TechTarget and its partners may contact you regarding relevant content, products and special offers. You also agree that your personal information may be transferred and processed in the United States, and that you have read and agree to the Terms of Use and the Privacy Policy. Office 365 has grown rapidly as businesses lose the appetite for maintaining these applications on-premises while supporting a mobile workforce.

What are the new opportunities that Azure offers, how does it compare to other cloud platforms and what are the risks of getting it wrong? The developer perspective. 3 Microsoft Azure features you need to know about. ‘Microsoft Azure’ Advisor Feature And Options For Automation: The Cloud Platform Wants To Outsmart ‘Amazon Web Services’ : Tech. (Photo : David Ramos/Getty) The cloud services platform "Microsoft Azure" is being revamped with the added functionalities and options, but Microsoft wants it even stronger The cloud computing has got significance over the years considering the cyber-attacks, data theft etc. 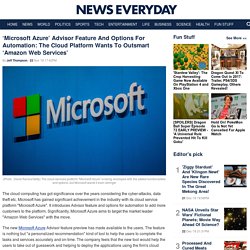 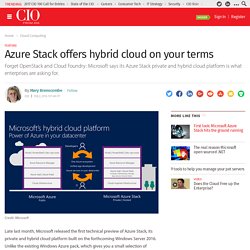 Unlike the existing Windows Azure pack, which gives you a small selection of Azure-compatible features, Azure Stack is (for the most part) the same code as Microsoft’s own Azure cloud, for both running a cloud and delivering cloud services. And unlike other private and hybrid cloud offerings, what you get is ready to use, says Azure CTO Mark Russinovich, because it includes both IaaS and PaaS services. “This is a hybrid cloud platform; a platform you can deploy on premises that has the power of a hyperscale public cloud. You can run the services and use the services that are available in a public cloud in your own data center.” That’s something only Microsoft is offering, he says. Other hybrid cloud systems focus only on the application model, which Russinovich views as only addressing developers. 5 Business Benefits of Microsoft Azure Platform.