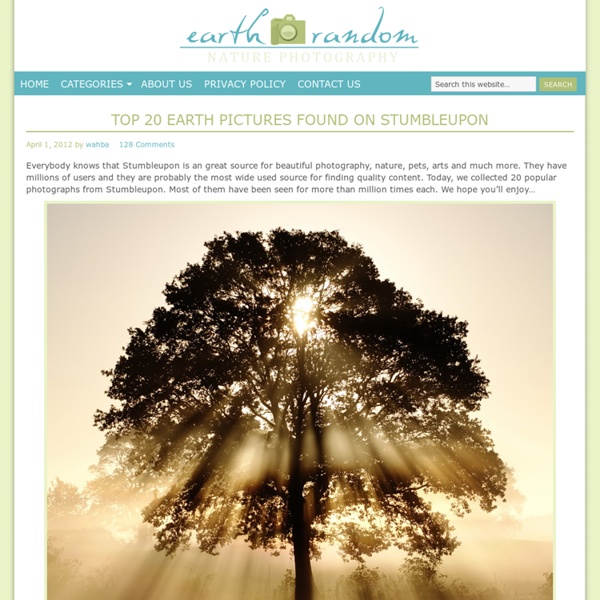 10 Shipwrecks Frozen In Time Our World “The sea has never been friendly to man. At most it has been the accomplice of human restlessness.” – Joseph Conrad 21 Most Beautiful Nature Photos On Stumbleupon These are the 21 most beautiful nature photos on Stumbleupon. Stumbleupon is big society where you can spend all your day and all you life with smile on your face. On that site you can find lots of things, like photos, animals, home stuff and many more, nature photos like these one below.

Best Wild Nature Photos of The Year 2013 Today i’m presenting you the most vivid and impressive photos of wildlife from around the world, winning international photo contests of the year. Let us look at these wonderful works together! More Awesome Stuff... 36 Amazing Photos From the First Drone Contest Melissani Undercover Cave and Lake | Explore Dream Vacations One of the Ionian islands in Greece, Kefalonia is definitely the greenest and greatest. There’s great quantity of gorgeous nature and breathtaking landscape there. Vacationers and travelers who arrive here are fascinated by the magnificent rugged mountain ranges and also the valleys in between them which are full of number of vineyards. Just one of Kefalonia’s many well known sightseeing and tours points of interest that travelers can enjoy during their vacation is Melissani Lake. This massive underground cave was formed around one thousand years ago when the ceiling of a huge cave system broke down and tumbled in the sea beneath it uncovering the clear blue waters on the wonderful sunlight above.

30 Amazing Conceptual Photographs Photography is always about capturing the meaning, significance and essence of a moment in time, however, conceptual photography takes this idea to the extreme, by capturing a thought, idea, or message to the viewer and communicating it in a clever and interesting method. We’ve gathered up 30 awe-inspiring conceptual photographs that will make you take a moment to look a little bit closer and try to decipher the message of each photograph. If you love these photography roundups, check out our other posts: Thanks! As always, if you enjoy these posts, please help share them with your friends via your favorite social network. Your support helps us continue to grow and provide the best articles and tutorials on our network.

31 Haunting Images Of Abandoned Places That Will Give You Goose Bumps The world is full of wondrous things, some consistently packed with gawking tourist and others almost entirely abandoned. Here’s a selection of some of those fascinating empty spaces, ghost towns that are rich with history and the stories of the people that used to occupy them. While most continue to rust and crumble in their neglect, all remain hauntingly beautiful. 1. I.M. Cooling Tower, Belgium 13 Most Beautiful and Famous Trees on Earth “A tree is a wonderful living organism which gives shelter, food,warmth and protection to all living things. It even gives shade tothose who wield an axe to cut it down” – Buddha. There are probably hundreds of majestic and magnificent trees in the world – of these, some are particularly special:

The Top 75 ‘Pictures of the Day' for 2012 Oct 17, 2012 *Update: The Top 100 ‘Pictures of the Day’ for 2012 have just been published. Click here to check out the most up-to-date post! Daredevil photographers brave boiling waters to capture the drama of searing-hot lava crashing into the seas off Hawaii By Daily Mail Reporter Published: 12:02 GMT, 5 September 2012 | Updated: 15:09 GMT, 5 September 2012 Two photographers risked their lives to become the first people to capture the explosive moment fiery lava crashes into the sea.

These 20 Photographs Will Leave You Speechless. Especially The 11th One. There Are No Words. Take a look at these 20 powerful photos that will leave you speechless. Some of these photos are of truly historic moments, while others, are quite heartbreaking. World War II veteran from Belarus Konstantin Pronin, 86, sits on a bench as he waits for his comrades at Gorky park during Victory Day in Moscow, Russia, on Monday, May 9, 2011.

United States Captured In 8 Beautiful Photos - Explore King What many people living in the United States of America (U.S.A.) don’t know is that this country is actually a great place to travel around, because it offers tons of stunning scenery. The United States is one of the most visited countries in the world for good reasons. Enjoy these 8 Beautifully captured photos. Source Source Source The 7 Weirdest Glow-in-the-Dark Creatures by Natalie Wolchover | March 27, 2012 12:57pm ET Credit: catalano82 | Creative CommonsGlowing is a common trick in nature. Bioluminescence, the ability to give off light through a simple chemical reaction, is so useful that it has evolved independently at least 50 different times, and can be found among such diverse lifeforms as mushrooms, fireflies and terrifying deep sea creatures.

Photographer captures haunting images of sights inside the abandoned asylums of America By Daily Mail Reporter Published: 21:02 GMT, 6 September 2012 | Updated: 21:36 GMT, 8 September 2012 These are the buildings where thousands of long-suffering wards of the state lived out their lives from the 19th century until the next, when the treatment of the mentally ill entered the modern era.