LIBERTY! . Chronicle of the Revolution 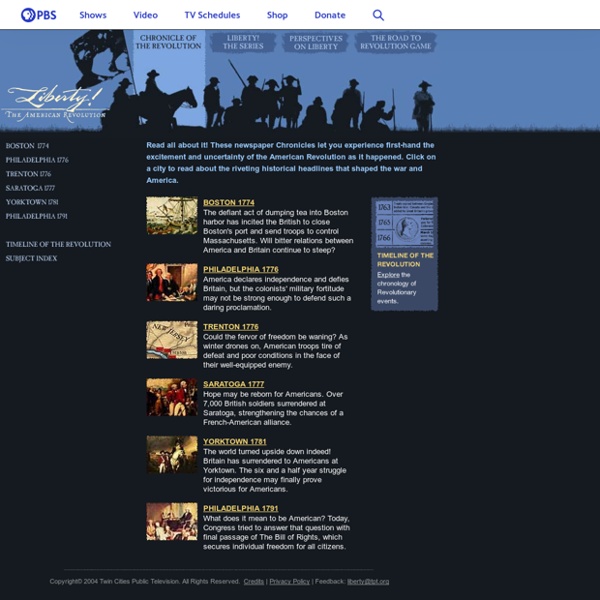 Supreme Court Landmarks Bethel School District #43 v. Fraser (1987) Holding: Students do not have a First Amendment right to make obscene speeches in school. Matthew N. Fraser, a student at Bethel High School, was suspended for three days for delivering an obscene and provocative speech to the student body. In this speech, he nominated his fellow classmate for an elected school office. The Supreme Court held that his free speech rights were not violated.

Our Documents - 100 Milestone Documents The following is a list of 100 milestone documents, compiled by the National Archives and Records Administration, and drawn primarily from its nationwide holdings. The documents chronicle United States history from 1776 to 1965. Complete List of Documents Please note that you can always use the thumbnail images at the top of every page to navigate directly to any of the 100 Milestone Documents. home Political Cartoons - Political Humor, Jokes, and Pictures, Obama, Palin ~ September 4, 2015 - 134936 Ken Catalino - Friday, September 04, 2015 Should Jeb Bush run in the 2016 presidential election? Submit Pictures of the Revolutionary War National Archives and Records Administration Washington, DC 20408 Cover Photograph: Bunker Hill. Cropped from item 15. 148-GW-448. How to Order The selected pictures listed below are among the audiovisual holdings of the National Archives that relate to the American Revolution. They are photographic copies of works of art.

Bill of (Your) Rights - Song with Free Worksheets and Activities Educational Songs with Free Worksheets Song Preview Teach the Bill of Rights with a rap song: educational music about the first Constitutional amendments, free speech and more. JewettC - MWF 11.15 - Revolutionary era cartoons IntroductionPolitical Cartoons are used as a form political and social commentary, with their most effective ones being able to present an issue in a cleverly concise and a thought provoking manner. Many people do not realize that these witty editorial pictures actually originated during the Revolutionary Era of the United States. Around the middle of the 18th century, satirical cartoons began popping up everywhere in the colonies; they were used in newspapers, pamphlets, and even posters to unite the colonists under one continental spirit in their fight for independence from Great Britain. This brand new way of presenting topics as symbols was immensely popular and truly caused discussions in the most meager of intellects. On the other hand, It's no secret that Political Cartoons are charged with their own agendas. Because of these some had pushed the medium even to the levels of propaganda, convincing people of extreme opinions using emotional imagery and skewed facts.

Declaration of Independence Facts and Information for Kids This worksheet has a free sample available. Download the sample here » Download This Sample This sample is exclusively for KidsKonnect Basic members!