The Ashmolean Museum: Home page of the Museum 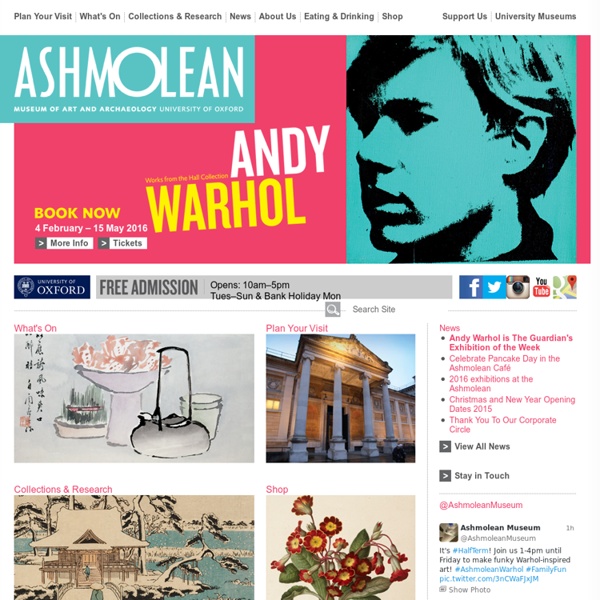 Google Domette Interlining. This traditional interlining is available in the widest variety of weights and finishes to help improve the draping qualities of your curtains. It adds extra weight and body to the lightest of curtain fabrics and is ideal for use with Roman Blinds to improve folding and reduce light entry. Christ Church Picture Gallery Christ Church is unique among the Oxford and Cambridge colleges in possessing an important collection of Old Master paintings and drawings, housed in a purpose-built Gallery of considerable architectural interest in itself. General John Guise bequeathed his collection of over 200 paintings and almost 2000 drawings to his former college, where it arrived after his death in 1765. This extraordinary gift enabled Christ Church to introduce art into Oxford education without the necessity to travel to Italy or to gain access to stately homes, which still held the majority of art collections in the country. At that date the collection was unequalled by any other Oxford institution.

Claydon House Get involved with 500 years of history Whether you want to meet new people, learn a new skill or simply enhance your CV, we have lots of opportunities available to suit everyone. Keep checking our website for all the exciting events happening at Claydon this coming year that you could be part of. Nathan Coley Nathan Coley (b.1967, Glasgow, Scotland) is interested in the idea of ‘public’ space, and his practice explores the ways in which architecture becomes invested – and reinvested – with meaning. Across a range of media Coley investigates what the built environment reveals about the people it surrounds and how the social and individual response to it is in turn culturally conditioned. Using the readymade as a means to take from and re-place in the world, Coley addresses the ritual forms we use to articulate our beliefs – from hand-held placards and erected signs to religious sanctuaries. Whether highlighting in illuminated letters the testimony of a New Yorker recalling the World Trade Center attacks or erasing the names of the dead from their gravestones, his work frequently turns the specific into the general, thereby testing its function as a form of social representation.

Attingham Park With so much to see and do on a visit, we've picked our top recommendations for a day out this spring. The mansion is a must for any visit, and this spring we're revealing the remarkable work we've already carried out as part of our Through the Roof project with the newly-restored stained glass dome in the Picture Gallery staircase on display. Our parkland will begin to fill with flowers and wildlife this spring, so why not pick up a walks leaflet on arrival to guide you round our favourite routes? Zeng Fanzhi ZENG FANZHI, Self-portrait, 2011, oil on canvas, 59 × 39 5/16 inches (150 × 100 cm) Zeng Fanzhi Listed Exhibitions (29 Kb) Zeng Fanzhi was born in Wuhan, China in 1964. Major exhibitions include Singapore Art Museum (2007); Musée d'Art Moderne de Saint-Etienne de Metropole, Saint-Etienne, France (2007); Fundacion Godia, Barcelona, Spain (2009); National Gallery for Foreign Art, Sofia, Bulgaria (2010); and Rockbund Art Museum, Shanghai, China (2010). He has participated in numerous international group exhibitions including the first Guangzhou Triennale (2002); the Biennale di Venezia (2009); and "I mondo vi appartiene" at the François Pinault Foundation, Palazzo Grassi, Venice (2011).