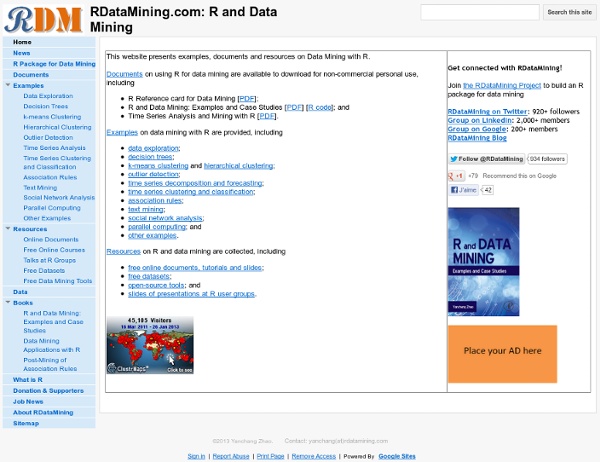 Statistics with R Warning Here are the notes I took while discovering and using the statistical environment R. However, I do not claim any competence in the domains I tackle: I hope you will find those notes useful, but keep you eyes open -- errors and bad advice are still lurking in those pages... Should you want it, I have prepared a quick-and-dirty PDF version of this document. The old, French version is still available, in HTML or as a single file. You may also want all the code in this document. 1. This work is licensed under a Creative Commons Attribution-NonCommercial-ShareAlike 2.5 License.

Visualizing Tables with plot.table Home > R > Visualizing Tables with plot.table plot.table function in the Systematic Investor Toolbox is a flexible table drawing routine. plot.table has a simple interface and takes following parameters: plot.matrix – matrix with data you want to plotsmain – text to draw in (top, left) cell; default value is blank stringhighlight – Either TRUE/FALSE to indicate if you want to color each cell based on its numeric value Or a matrix with colors for each cellcolorbar – TRUE/FALSE flag to indicate if you want to draw colorbar Here is a few examples how you can use plot.table function to create summary reports. First, let’s load Systematic Investor Toolbox: To create basic plot.table: To create plot.table with colorbar: Next, I want to show a more practical example of plot.table function. I will show more examples of plot.table in the future posts. To view the complete source code for this example, please have a look at the plot.table.test() function in plot.table.r at github. Like this:

Gapminder: Unveiling the beauty of statistics for a fact based world view. 5 of the Best Free and Open Source Data Mining Software The process of extracting patterns from data is called data mining. It is recognized as an essential tool by modern business since it is able to convert data into business intelligence thus giving an informational edge. At present, it is widely used in profiling practices, like surveillance, marketing, scientific discovery, and fraud detection. There are four kinds of tasks that are normally involve in Data mining: * Classification - the task of generalizing familiar structure to employ to new data* Clustering - the task of finding groups and structures in the data that are in some way or another the same, without using noted structures in the data.* Association rule learning - Looks for relationships between variables.* Regression - Aims to find a function that models the data with the slightest error. For those of you who are looking for some data mining tools, here are five of the best open-source data mining software that you could get for free: Orange RapidMiner Weka JHepWork

RStudio Server Amazon Machine Image (AMI) - Louis Aslett Current AMI Quick Reference (27nd Jun 2015)Amazon instance type reference Click to launch through AWS web interface: What’s new recently? Easy Dropbox setup to make syncing files on/off server easy, including selective folder sync. Preinstalled RStudioAMI R package for server control. HVM AMIs for full current generation instance support. < Back to homepage Amazon’s EC2 platform provides a convenient environment for rapidly procuring computational resources in the cloud. To get started with the Amazon cloud, you must first signup for an AWS account if you don’t already have one. Click here for a simple video guide to using the AMIs listed here, or for more detailed information read on. What is this? If you want to run a server in the Amazon cloud, you have to select what system you are going to bootup. In particular, many common tools and dependencies are built-in. Why an RStudio AMI? AMI Release History * N/A since these data centres were not yet open when the images were built. Usage

Interactive graphics for data analysis: principles and examples - Martin Theus, Simon Urbanek Visualizing Data: Challenges to Presentation of Quality Graphics—and Solutions Naomi Robbins, a consultant and seminar leader who specializes in the graphical display of data, offers training on the effective presentation of data. She also reviews documents and presentations for clients. She is the author of Creating More Effective Graphs. Three common challenges statisticians and others face when preparing data for presentation include poor options and defaults in many software packages used for creating graphs, managers and colleagues who are socialized to expect figures that attract attention, and poor instructions from conference organizers. Poor Options and Defaults in Many Software Packages Many software programs for drawing charts and graphs offer defaults and options that are full of fancy embellishments that detract from the clear and accurate communication of data. Figure 1 shows the results of an Internet/mail survey of ASA members with six to 15 years of membership. There are numerous other problems with this figure. Summary