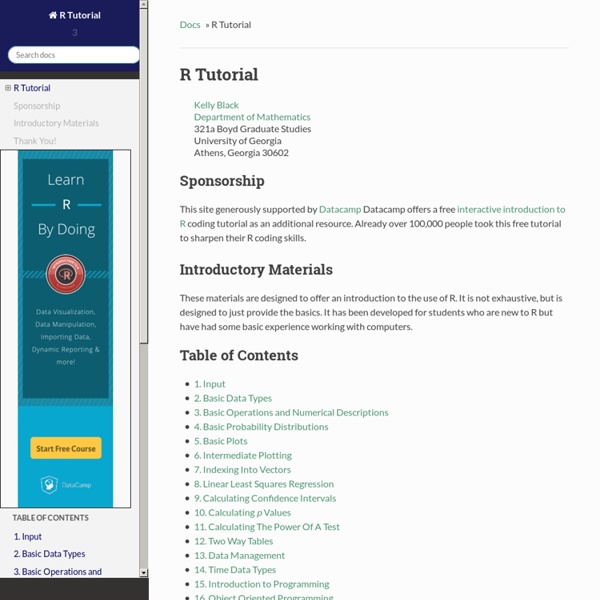 321a Boyd Graduate Studies University of Georgia Athens, Georgia 30602 Introductory Materials¶ These materials are designed to offer an introduction to the use of R. Thank You! I have received a great deal of feedback from a number of people for various errors, typos, and dumb things. I have also written a book about programming R.

Visualizing data using a 3D printer In a break from my usual obsessions and interests here is a guest blog post by Ian Walker. I'm posting it because I think it is rather cool and hope it will be of interest to some of my regular readers. Ian is perhaps best known (in the blogosphere) for his work on transport psychology - particularly cycling - but is also an expert on psychological statistics. Some time ago, I had some data that lent themselves to a three-dimensional surface plot. Of course, displaying fundamentally three-dimensional items in two dimensions is an ancient problem, as any cartographer will tell you. I managed to meet up with Adrian back in May 2012, and he explained to me the structure of the STL (stereolithography) files commonly used for three-dimensional printing. I'm normally a terrible hacker when it comes to programming; I usually storm in and try to make things work as quickly as possible then fix all the mistakes later. Demo source('r2stl.r') x <- seq(-10, 10, length= 100) y <- x z <- outer(x, y, f)

The MakeR way: Using R to reify social media data via 3d printing If you’ve read any of my previous posts you know that I am constantly experimenting with different ways to represent and explore social network data with R. For example, in previous posts I’ve written about sonification of tweet data, animation of dynamic twitter networks, and various ways to plot social networks (here and here). In each case the underlying idea is finding different ways to explore data under the assumption that sometimes just looking at something from a different point of view reveals something novel. First, why would anyone want to take network data, model it in 3D and then use a 3D printer to make it real? So how did I use R in this project? edge.list.df <- data.frame(from=retweeters, to=retweeted) g <- graph.data.frame(edge.list.df, directed=TRUE) Now that I have the network, I can use the features of the igraph package to set the size and colors of the nodes and edges (code not shown, but you can see an example here). writeSTL("~myNetworkPrintFile.stl")