The Last Samurai: Rare Colored Photos of Last Japanese Samurai In The 1800s. Remastered old photos are pretty cool on their own, but let’s step it up a notch by adding hand-colorized photos of the last Samurai of the 1800s. 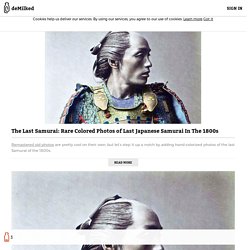 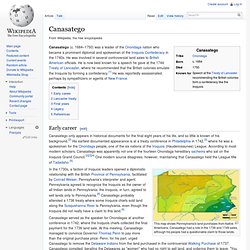 He was involved in several controversial land sales to British American officials. He is now best known for a speech he gave at the 1744 Treaty of Lancaster, where he recommended that the British colonies emulate the Iroquois by forming a confederacy.[1] He was reportedly assassinated, perhaps by sympathizers or agents of New France. Early career[edit] Canasatego only appears in historical documents for the final eight years of his life, and so little is known of his background.[2] His earliest documented appearance is at a treaty conference in Philadelphia in 1742,[2] where he was a spokesman for the Onondaga people, one of the six nations of the Iroquois (Haudenosaunee) League. This map shows Pennsylvania's land purchases from Native Americans. Lancaster treaty[edit] Pattern welding.

A high resolution image of a modern pattern welded knife blade, showing the dramatic patterning on the side below, and the layering of the steel in the spine above. 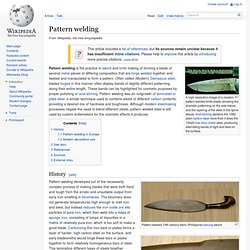 Acidetching darkens the 1080 plain carbon steel more than it does the 15N20 low alloynickel steel, producing alternating bands of light and dark on the surface. Pattern welding is the practice in sword and knife making of forming a blade of several metal pieces of differing composition that are forge-welded together and twisted and manipulated to form a pattern. Often called (Modern) Damascus steel, blades forged in this manner often display bands of slightly different patterning along their entire length. These bands can be highlighted for cosmetic purposes by proper polishing or acid etching. Pattern welding was an outgrowth of laminated or piled steel, a similar technique used to combine steels of different carbon contents, providing a desired mix of hardness and toughness.

Damascus article. Rongorongo. Rongorongo (/ˈrɒŋɡoʊˈrɒŋɡoʊ/; Rapa Nui: [ˈɾoŋoˈɾoŋo]) is a system of glyphs discovered in the 19th century on Easter Island that appears to be writing or proto-writing. 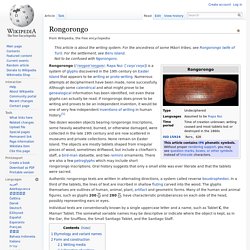 Numerous attempts at decipherment have been made, none successfully. Although some calendrical and what might prove to be genealogical information has been identified, not even these glyphs can actually be read. If rongorongo does prove to be writing and proves to be an independent invention, it would be one of very few independent inventions of writing in human history.[1] Two dozen wooden objects bearing rongorongo inscriptions, some heavily weathered, burned, or otherwise damaged, were collected in the late 19th century and are now scattered in museums and private collections. None remain on Easter Island. And 280 , have characteristic protuberances on each side of the head, possibly representing ears or eyes. Etymology and variant names[edit] Rongorongo is the modern name for the inscriptions. 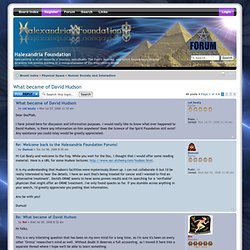 I have heard that Hudson is no longer working with or promoting the ORMUS materials. The reason given was for personal reasons. Hudson wanted to fund his ORMUS production and research without going through conventional channels because he found out fairly quickly how resistant existing structures were to the kind of changes that ORMUS promised. He decided to go for small investors using a series of lectures across the United States. David Hudson made a huge contribution to people's knowledge about what we call ORMUS but he is not longer working in this area. Laurence Gardner - White Powder Gold - Lost Secrets of the Sacred Ark.

As related in Laurence Gardner's book, Lost Secrets of the Sacred Ark, scientific attention has recently been directed towards an exotic form of elemental matter not shown in the Periodic Table of Elements. Derived from gold, platinum group metals and other transition elements, these impalpable white powder substances have been referred to as 'monatomic' (a single atomic state). As such, they were classified by their research pioneer, David Hudson, in the 1980s as ORMEs (Orbitally Rearranged Monatomic Elements). New understandings in physics suggest, however, that the powders might actually be 'diatomic' or small atomic cluster 'condensates'. It is now generally accepted, therefore, that the materials might be more universally referred to by the generic terms ORMUS or 'M-state' elements. Thermo-gravimetric analysis has revealed that, at certain high temperatures, the material weight of M-state elements will reduce substantially, even to the degree that they will levitate. 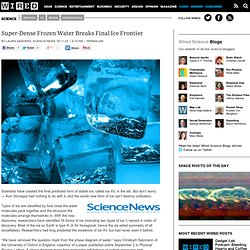 But don’t worry — Kurt Vonnegut had nothing to do with it, and the exotic new form of ice can’t destroy civilization. Types of ice are classified by how close the water molecules pack together and the structure the molecules arrange themselves in. With the new discovery, researchers have identified 16 forms of ice (including two types of ice I) named in order of discovery. Most of the ice on Earth is type Ih (h for hexagonal, hence the six-sided symmetry of all snowflakes). Researchers had long predicted the existence of ice XV, but had never seen it before. Monatomic gold.