Rate My Top 150 Funny Pics of the Month 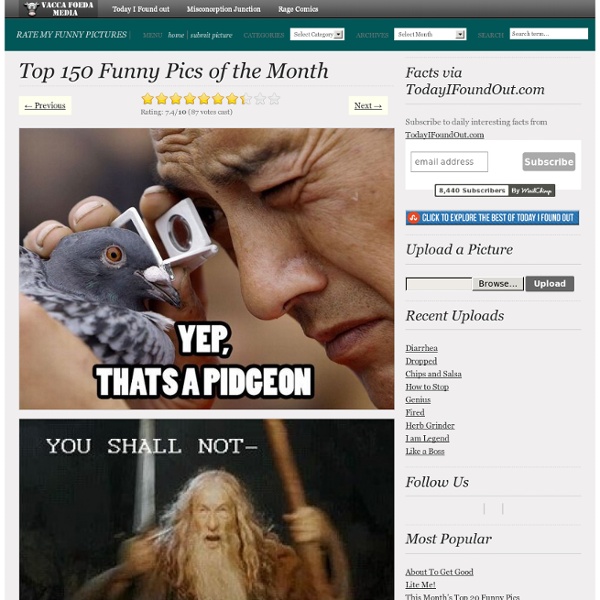 The Best Examples Of Horrific And Embarrassing Parenting On Facebook Almost Done! Choose an available username to complete sign up Forgot Password Enter the email associated with your account and you will be emailed instructions to reset your password A recovery link has been sent to your email. Activation Link Was Emailed There's one last annoying step. We require an email to sign up Reactivate Account This account has been deactivated or was never activated. A reactivation link has been sent to your email address. Confirm Your Email Address We have sent you an email with a link to confirm and activate your account. Demotivational posters - only the BEST The key The key, to another life It's science It's science, you'll have to take it off for your own good Television Television, it's all smoke and mirrors Om nom nom Om nom nom, Nomnomnomnom Not a week goes by Not a week goes by, that I don't make this cake for someone Give this kid Give this kid, a medal Strangely Strangely, mommy uses it the most SIRI, is trying to kill me Girlfriend bought me a Coke Girlfriend bought me a Coke, I think she's trying to tell me something Looks like Looks like, you forgot to do something

10 Insanely Creative Facebook Status Updates et’s face it, most status updates are boring. Just do a search on Facebook for common words like food and you’ll see the mundane updates of many users. Some users put a lot of effort into coming up with creative status updates, though. Facebook Changes We’d Actually Want To See If you had a dollar for every person who posted their hatred of the new Facebook layout, you’d be able to give Mark Zuckerberg a run for his money. Okay that’s a guess, and most likely a wrong one, but you get our point. When Facebook made its most recent set of changes the Preteen Panic Meter hit “Justin Bieber Has A Girlfriend” levels, and while that demographic made the most noise (mostly high-pitched screams), we weren’t too crazy about the adjustments either.

Why Teachers Drink | Dizzy Dee Disclaimer: I have no regard whatsoever for my grammar in this post. Do not attack my grammar as opposed to my comment because as a former debater that will just piss me off and make you look stupid. Firstly, I’d like to say that some of the people are right, youth now seem not to give two shits about education and yes the education system in the US have drastically dropped in efficiency. But let’s be real, this isn’t anything new, there is a general culture of anti-intellectualism in our country among ALL US citizens, not just the youth. And how can you really blame kids for not caring about their education when the majority of them are put aside or ignored. Also, in response to the parent comment, sure parents are a large part of the success of an educational system, but let’s be honest here the schools and teachers have a large responsibility to FOSTER that relationship between the family and the school. And in a buisness world, what’s more valuable to know?

THE WALMART DRINKING GAME by Matt Houghton - Artist: Roxie Vizcarra To set the record straight: I’m a man who likes to drink. Excessively. I like to drink at bars, in clubs, at friends’ apartments, in my own apartment, with homeless people unless they’re scary or look diseased, while taking a dump and so on and so forth. Included in that is while playing drinking games. A shot every time a fight breaks out on Jerry Springer. Every time you see a mother pushing a cart with obese child in it, take one shot. Every time you see what appears to be a single mom under the age of 20, take one shot.