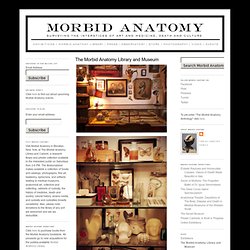 It is committed to celebrating and providing materials dedicated to the places where death and beauty intersect. The Library is open on Saturdays from 2-6 PM. Mysterious People. Occultopedia: The Occult and Unexplained Encyclopedia. Welcome to Occultopedia, the premier internet index of the paranormal, occult and inexplicable.

In addition to being the foremost online destination for information about the supernatural, unusual phenomena and the occult, Occultopedia also features a variety of resources for the pagan community, new age buffs, unexplained phenomena enthusiasts, curious minds, and skeptics as well.Occultopedia is the genuine article, the original and the best internet index of the extraordinary and uncanny, shamelessly copied by many, but never equaled. Only the Creepiest Photos Ever Taken. Mourning is a strange thing, and different cultures deal with it in vastly different ways. But there are reasons people associate the Victorians with morbidity and death, and one of them is memento mori.

The fact is, postmortem photographs like this were taken more than any other kind of photograph in the Victorian era -- especially in the U.S. -- and in many cases these carefully arranged, meticulously staged pictures were the only ones ever taken of their subjects. From Stanley Burns' book Sleeping Beauty: Memorial Photography in America: These photographs were a common aspect of American culture, a part of the mourning and memorialization process. Surviving families were proud of these images and hung them in their homes, sent copies to friends and relatives, wore them as lockets or carried them as pocket mirrors.

So, given your lack of a "culturally normative response" to these pictures, dear reader, we advise the faint of heart among you to click elsewhere. Our Curious World. Spontaneous Human Invisibility. A WOMAN NAMED Melanie in Ventura, California had a strange experience while sitting on her own living room sofa. 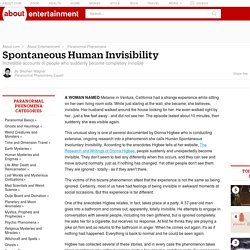 While just staring at the wall, she became, she believes, invisible. Her husband walked around the house looking for her. He even walked right by her - just a few feet away - and did not see her. The episode lasted about 10 minutes, then suddenly she was visible again. This unusual story is one of several documented by Donna Higbee who is conducting extensive, ongoing research into a phenomenon she calls Human Spontaneous Involuntary Invisibility. Strangemag.com - Investigating Strange Phenomena. Super Creepy Victorian-era Twins. I was digging through disorganized piles of old photos in a Portland antique store last week when I happened upon a goldmine of weirdness: amidst fading snapshots of family vacations and weddings were scattered a half-dozen or so photos of twins. 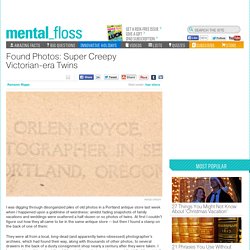 At first I couldn't figure out how they all came to be in the same antique store -- but then I found a stamp on the back of one of them: They were all from a local, long-dead (and apparently twins-obsessed) photographer's archives, which had found their way, along with thousands of other photos, to several drawers in the back of a dusty consignment shop nearly a century after they were taken. I know next to nothing about the children in these photographs, except that I find them totally haunting and strange, but if anyone recognizes their great-grandmother or something, leave a comment. (You never know!) Three sets of twins. This one seems ripe for a caption contest.

The proud parents of these babies had the above photo made into a postcard. Time Warp or Ghost Sighting: Your True Tales - February 2015. I wrote in last year about the poltergeist that lives in my walk-in closet and likes to shut my door and switch the light off when it wants my attention. 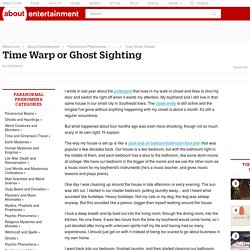 My boyfriend and I still live in that same house in our small city in Southeast Iowa. The closet entity is still active and the longest I've gone without anything happening with my closet is about a month. It's still a regular occurrence. But what happened about four months ago was even more shocking, though not so much scary in its own right.

The way my house is set up is like a Jack-and-Jill bedroom/bathroom floor plan that was popular a few decades back. One day I was cleaning up around the house in late afternoon or early evening. Unexplained Mysteries. Unexplained.info. Unsettling Old Photos of the “Living” Dead. Some of you might remember a blog I did last year, Only the Creepiest Photos Ever Taken. 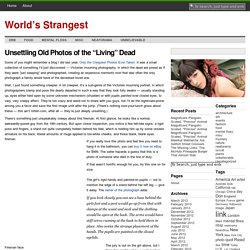 It was a small collection of something I’d just discovered — Victorian mourning photography, in which the dead are posed as if they were “just sleeping” and photographed, creating an expensive memento mori that was often the only photograph a family would have of the deceased loved one. Well, I just found something creepier. A lot creepier. It’s a sub-genre of the Victorian mourning portrait, in which photographers clamp and pose the dearly departed in such a way that they look fully awake — usually standing up, eyes either held open by some unknown mechanism (shudder) or with pupils painted over closed eyes, to very, very creepy effect.

They’re too crazy and weird not to share with you guys, but I’ll do the nightmare-prone among you a favor and save the first image until after the jump. There’s something just unspeakably creepy about this fireman. Oy. Unsolved. WEIRD FLORIDA: ROADS LESS TRAVELED. Weird NJ. Weirdus.com.