The God Fuse: 10 Things Christians and Atheists Can Agree On 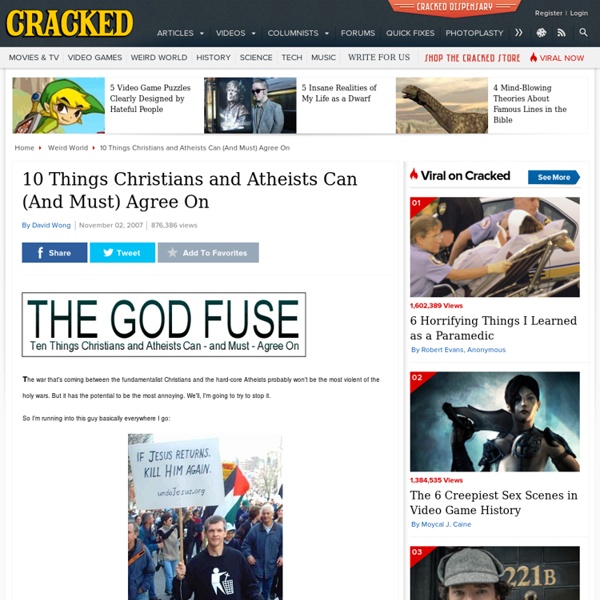 The war that's coming between the fundamentalist Christians and the hard-core Atheists probably won't be the most violent of the holy wars. But it has the potential to be the most annoying. We'll, I'm going to try to stop it. So I'm running into this guy basically everywhere I go: Not that exact guy. These things never end well. But I think we've got more common ground than we admit. Celebrating the death of somebody you disagreed with pretty much makes you a dick. I doubt anybody reading this has ever waved a snarky sign at a funeral, so I think we're pretty much all in the same boat still. So how about this: I'm going to throw out a few of these statements - things I think we have to agree on if we want to avoid disaster - and you can read until you see something you disagree with. Why? I go home, log into one of my favorite forums and one guy's got this as his avatar: And another dude has this: So I retreat to my own forums, and find out turbo evangelist Jerry Falwell had died that day.

Translations and interpretations of Leviticus 18:22; all views Homosexuality in Leviticus 18:22 Sponsored link. Which is the correct translation? Obviously, it is important for a student of the Bible to resolve exactly what behavior is forbidden: is it: Also, is the behavior forbidden to ancient Israelites, or modern-day Jews, or all males regardless of their religion, or all males and females, or some combination of the preceding. Unfortunately, there is no consensus on the meaning of this verse. English translations of this verse: These are not a great deal of help. Some translations are: The LB and NLT translations use the term "homosexuality" That is unusually deceptive for three reasons: Sponsored link: Various groups' interpretations of this verse: Waskow cites two alternative meanings to the passage: He concludes that if this passage condemns some forms of homosexual behavior, it may refer only to the ancient Israelites, not to North America today. Sponsored links: References: Net BibleÂ® is a new translation by The Biblical Studies Foundation.

25 Beautifully Illustrated Thought-Provoking Questions A question that makes you think is worth asking… At the cusp of a new day, week, month, or year, most of us take a little time to reflect on our lives by looking back over the past and ahead into the future. We ponder the successes, failures and standout events that are slowly scripting our life’s story. This process of self reflection helps us maintain a conscious awareness of where we’ve been and where we intend to go. If you would like to maximize the benefits of self reflection, our new sister site, Thought Questions, is for you. Remember, these questions have no right or wrong answers. Here’s a sample of 25 recent thought questions posted on the site: Thought Questions is updated daily. Title photo by: Oberazzi For all other photo credits please refer to ThoughtQuestions.com Related 6 Questions that Will Save Your Relationships When you don't ask sincere questions and talk it out, there's a lot of important stuff that ends up never getting said. May 21, 2014 In "Life" July 24, 2008

4 Things Both Atheists and Believers Need to Stop Saying #2. Devout: God Helps Those Who Help Themselves Getty Although probably not as immediately infuriating as "God Hates X," I really don't need to hear about who the devout think God helps. While God's existence might be an open question, there is no shortage of people doing every damn thing they can to help themselves and still failing. GettyKisses, JC! Indeed, even the omnipresent and useless "God works in mysterious ways" is preferable. #1. There have been atheists of significant intellect: Bertrand Russell, Richard Dawkins, and the aforementioned Christopher Hitchens. In support of this intellectual elitism, some atheists will say that skepticism is the sign of an active and curious mind -- traits consistent with learning. Getty"Who did this to me?" The perversion of the Spaghetti Monster meme is a good example of how some, particularly on the Internet, have destroyed the distinction between thoughtful protest and mere mockery.

The Enneagram is a model of nine worldviews and motivations Worldview and Motivation - What the Enneagram looks at: The Enneagram brings the way we view the world into sharp, clear focus. Our particular worldview impacts the unique way each of us brings our own thoughts, feelings and motivations to any situation. The Enneagram is like the perceptual glasses that we wear. It is also about our patterns of thinking and the places where we “hang out” more – our patterns of belief and our inner motivations. The Enneagram provides a clear map for us to see who we are, how we fit into the scheme of things and how we interact with others. How it is used: It is important that each of us self-identify our Enneagram type. Originally these teachings were used for spiritual growth and personal transformation. About the model: The Enneagram consists of a circle and nine lines and is therefore named ennea for nine and gramma for model. There are three types in each of three triads: head heart and gut. The Nine Types: Worldview, Motivation and Focus of Attention

Is Religion Inherently Oppressive? April 9, 2014 | Like this article? Join our email list: Stay up to date with the latest headlines via email. There’s little doubt, outside circles filled with self-delusional reactionaries, that religion is probably the most important force in continuing the oppression of women worldwide. Former president Jimmy Carter, who is probably the country’s most prominent liberal Christian, is willing to set aside his enthusiasm for faith to admit this. This isn’t because atheists and secularists have fewer people in their ranks that have ugly and backwards attitudes toward women. It’s hard not to suggest that what you need is more religious people making full-throated religious arguments for women’s equality, to counter the inevitable reactionaries that use religion to oppress women. It’s certainly a breath of fresh air having Carter explain, in his patient and comforting way, that there is no reason whatsoever to believe that religion mandates sexism.

A father's day wish: Dads, wake the hell up! Jeff Pearlman says a mom acquaintance is bereft that her husband shirked child carePearlman says he's a stay-at-home-dad fully involved in care of his two young childrenHe says dads need to get involved, childhood is short, tiredness from work no excusePearlman: Here are 10 rules for righteous dadhood Editor's note: Jeff Pearlman is a columnist for SI.com. He blogs at jeffpearlman.com. (CNN) -- The woman started crying. I didn't expect this, because, well, why would I? "My husband," she said, "doesn't care." "Uh, about what?" The floodgates now open, she told me her husband works from home. Two days later, by mere coincidence, a different mother cornered me. "Do what?" "Be out alone with both of the kids at once," she said. In case you are wondering, I am that dad. President Obama talks about fatherhood CNN Comedy: Father's Day Along with my wife (who, until recently, also worked from home), I wipe snot, clean poop, order time outs and say no -- Really, no! Really, wake the hell up. 1. 2.