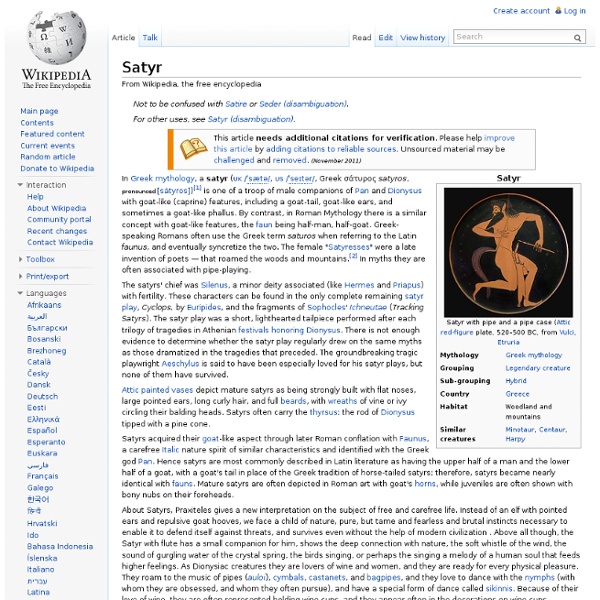 The satyrs' chief was Silenus, a minor deity associated (like Hermes and Priapus) with fertility. These characters can be found in the only complete remaining satyr play, Cyclops, by Euripides, and the fragments of Sophocles' Ichneutae (Tracking Satyrs). The satyr play was a short, lighthearted tailpiece performed after each trilogy of tragedies in Athenian festivals honoring Dionysus. There is not enough evidence to determine whether the satyr play regularly drew on the same myths as those dramatized in the tragedies that preceded. Attic painted vases depict mature satyrs as being strongly built with flat noses, large pointed ears, long curly hair, and full beards, with wreaths of vine or ivy circling their balding heads. Notice, the goat on the left has a short goat tail, but the Greek satyr on the right has a long horse tail. About Satyrs, Praxiteles gives a new interpretation on the subject of free and carefree life. In Greek mythology and art[edit] In Roman mythology and art[edit] Related:  Weird Bible stuff

Cockatrice A cockatrice is a mythical beast, essentially a two-legged dragon with a rooster's head. Described by Laurence Breiner as "an ornament in the drama and poetry of the Elizabethans", it featured prominently in English thought and myth for centuries. Legend[edit] Origins[edit] The cockatrice was first described in its current form in the late twelfth century. According to Alexander Neckam's De naturis rerum (ca 1180), the cockatrice was supposed to be born from an egg laid by a chicken and incubated by a toad; a snake might be substituted in re-tellings. It is thought that a cock egg would birth a cockatrice, and could be prevented by tossing the yolkless egg over the family house, landing on the other side of the house, without allowing the egg to hit the house. Abilities[edit] It was repeated in the late-medieval bestiaries that the weasel is the only animal that is immune to the glance of a cockatrice. The cockatrice was also said to fly using the set of wings affixed to its back. Notes[edit]

Bible Monsters Bible Monsters This page has received a lot of attention from revealed religionists who tell me it is inaccurate. It seems they've looked up the Bible verses found below in their Bibles, but the references to the Bible monsters and fictional creatures are not found. That is because they're not looking in the King James Version of the Bible. The fact that the changes were made, proves the Deist position that the Bible, or any proclaimed "holy" book, cannot be the word of God. The changes in the Bible that the objections to this page have brought to light, make it clear Thomas Paine was correct in his above quote. Bible Monsters! As Deists know through the exercise of our God-given reason, monsters are not real. A satyr, pictured at left, is a creature of Greek mythology. In the Old Testament we find reference to these mythical creatures as if they were real. It's probably for text like this that the Catholic Church had forbidden people from reading the Bible!

Unicorns, Satyrs, and the Bible In several different places, my Bible speaks of the unicorn and the satyr. However, we now know that neither of these creatures actually existed, but instead had their origins in mythology. Why, then, are they mentioned in God’s Word as if they were real animals? On occasion, Bible writers used phrases, terms, and references that were in common use at the time they penned the books of the Bible. However, the Bible never “panders to pagan mythology” by incorrectly referring to non-existent, mythological animals as if they were real, living creatures. a mythological animal resembling a horse or a kid with a single horn on its forehead. Certain poetical passages of the biblical Old Testament refer to a strong and splendid horned animal called re’em. Strong support for such a view, along with the answer to the second question, comes from a rather unusual source (and one that certainly would be considered a “hostile witness” in regard to the truthfulness and accuracy of the Bible). Dr.

Where are unicorns found in the Bible Yes and no. Some translations (most notably the King James version) translate the Hebrew re'em as "unicorn." There is debate on what animal it is referring to, in context it seems to refer to a real animal that would be known to a contemporary reader. Most modern English translations use "wild ox" instead of "unicorn," as there is historical and archaeological evidence that suggests a species of ox that could appear to have one horn was present in the middle east during the Old Testament time period. These are the verses in which the word "unicorn" is sometimes found: Deuteronomy 33:17 His glory is like the firstling of his bullock, and his horns are like the horns of unicorns: with them he shall push the people together to the ends of the earth: and they are the ten thousands of Ephraim, and they are the thousands of Manasseh. Job 39:9-10 Will the unicorn be willing to serve thee, or abide by thy crib?

Unicorn Of the Unicorn In European folklore, the unicorn is often depicted as a white horselike or goatlike animal with a long horn and cloven hooves (sometimes a goat's beard). In the Middle Ages and Renaissance, it was commonly described as an extremely wild woodland creature, a symbol of purity and grace, which could only be captured by a virgin. History Unicorns in antiquity Cosmas Indicopleustes, a merchant of Alexandria who lived in the 6th century, made a voyage to India and subsequently wrote works on cosmography. Middle Ages and Renaissance Virgin Mary holding the unicorn (c. 1480), detail of the Annunciation with the Unicorn Polyptych, National Museum, Warsaw Medieval knowledge of the fabulous beast stemmed from biblical and ancient sources, and the creature was variously represented as a kind of wild ass, goat, or horse. The Throne Chair of Denmark is made of "unicorn horns" – almost certainly narwhal tusks. Alicorn The hunt of the unicorn In one of his notebooks Leonardo da Vinci wrote:

Unicorns in the Bible Keywords: unicorns, Bible, animals, Job, rhinoceros, elasmotherium, aurochs, rimu, wild ox, Bos primigenius, extinct Some people claim the Bible is a book of fairy tales because it mentions unicorns. However, the biblical unicorn was a real animal, not an imaginary creature. The Bible refers to the unicorn in the context of familiar animals, such as peacocks, lambs, lions, bullocks, goats, donkeys, horses, dogs, eagles, and calves (Job 39:9–12.1) In Job 38–41, God reminded Job of the characteristics of a variety of impressive animals He had created, showing Job that God was far above man in power and strength.2 Job had to be familiar with the animals on God’s list for the illustration to be effective. Modern readers have trouble with the Bible’s unicorns because we forget that a single-horned feature is not uncommon on God’s menu for animal design. The absence of a unicorn in the modern world should not cause us to doubt its past existence. Help keep these daily articles coming.

Weird Stuff in the Bible Stupid and Weird Stuff in the Bible 2004 This page is under construction, and currently in outline form (for your enjoyment). Introduction Let's face it. The bible is really goofy sometimes. There are some passages in it that make me laugh out loud, and make me wonder, "Who the hell wrote this crap?" Maybe it is all just a big joke after all. Who knows. There is a story where the Israelites are instructed to cover up their feces outside their encampment, because Almighty God was inclined to stroll around at night, and he didn't want to step in any poo. The story of the Tower of Babel is really stupid.

In the Bible, who were the "giant sons of God"? A Staff Report from the Straight Dope Science Advisory Board November 20, 2001 Dear Straight Dope: Who or what were the giant sons of God (Nephilim) mentioned in the Bible and what happened to them? — Michael K. Let's quote the text from Genesis 6. When men began to increase on earth and daughters were born to them, the sons of God saw how beautiful the daughters of men were and took wives from among those that pleased them. This is one of the strangest accounts in Genesis, and there is no certain explanation. It is very likely that the passages are only a fragment of what was once a longer narrative, or commonly told tale. Almost all pagan mythologies abound with legends about intercourse between gods and mortal women, and between goddesses and mortal men, producing demigods or heroes as children. So, for a start, who are the "sons of God"? Some translators use "sons of the great," since the term elohim in the Psalms often means "mighty." So, I repeat, the text is extremely unclear. — Dex

Giant (mythology) Giant is the English word (coined 1297) commonly used for the monsters of human appearance but prodigious size and strength common in the mythology and legends of many different cultures. The word Giant was derived from one of the most famed examples: the gigantes (Greek "γίγαντες"[1]) of Greek mythology. There are also accounts of giants in the Old Testament, most famously Goliath, Og King of Bashan, the Nephilim, the Anakim, and the giants of Egypt mentioned in 1 Chronicles 11:23. Fairy tales such as "Jack the Giant Killer" have formed our modern perception of giants as stupid and violent monsters, sometimes said to eat humans, especially children (though this is actually a confusion with ogres, which are distinctly cannibalistic). David faces Goliath in this 1888 lithograph by Osmar Schindler. Genesis 6:4-5 tells of the Nephilim before and after the Flood. The Book of Enoch describes "giants" as the offspring of Fallen angels and mortal women in 7:2.[6]