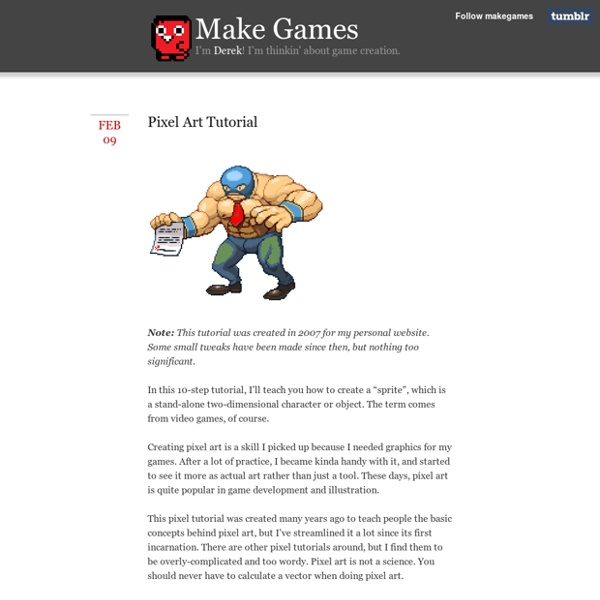 30 Excellent Pixel Art Tutorials For Pixel Lovers If you’re born in 90s, I am sure that you have witnessed the glorious age of the pixel art. It exists on the old-school gaming platform, mobile phone and other digital devices. It’s one of the greatest technological inventions that dominate the digital world for several years, and now it rises again as a definitive art form within the artist community. Doing the pixel art could mean that you’re striving for perfection, as you even need to manually craft out the shading, dithering and even anti-aliasing. That means you have to draw the artwork pixel by pixel! Phaser - Learn - Making your first Phaser game: Part 1 - Introduction Welcome to the our first tutorial on Making a Game with Phaser. Here we will learn how to create a small game involving a player running and jumping around platforms collecting stars. While going through this process we'll explain some of the core features of the framework. What is Phaser? Phaser is an HTML5 game framework which aims to help developers make powerful, cross-browser HTML5 games really quickly and, unlike some others, has solely been built to work with the mobile browsers.

Mapgen: Tunneling Algorithm - Cogmind / Grid Sage Games 15 Flares Filament.io 15 Flares × Cogmind’s main dungeon maps are excavated by “tunnelers” that dig corridors and rooms, much in the way a dungeon architect would build a home for their master’s minions. An empty map is seeded by one or more tunnelers, and they travel around that map opening up all the areas that will become occupiable space, e.g. corridors, doors, rooms, halls. I like tunneling algorithms because with the right parameters they can create fairly realistic environment.

PixelProspector - the indie goldmine On the 30th July 2014 the site got updated, restrutured and redesigned… however the update is still not finished and thus this new Indie Resources overview page is partly incomplete. In case you are missing something you can still check out the outdated old Indie Resources page until the update is complete. Thank you for your understanding. (Game Making Tools, Game Design, Postmortems, Programming, Project Management…) (Create/Download Graphics, Hire Graphic Designer…) MS Paint Tricks MS Paint Tricks by Messenjah MSPaint is actually a very powerful image editor. Here's all the things about MSPaint you probably didn't know. Chapter 1 - Brush Scaling This is pretty much the most basic thing here. You may think that the standard brush sizes in MSPaint only come in the three sizes, right?

Part 2: Building a Word Search Game in HTML5 with Phaser In the last tutorial we started building a word searching game in Phaser. We set up the tile grid and a dictionary so that we could check if any particular word actually exists or not (or according to the dictionary we are using at least). In this tutorial we are going to extend on that and allow the player to select a run of tiles from the grid (horizontally, vertically and diagonally) in an attempt to create a word. If they guess a word successfully it will increase their score. We will also be creating a timer that will end the game when it reaches 0 (rather than going to a game over screen it will just restart the game for now). Basically, at the end of this tutorial the core functionality of the game will be completed, it will just be lacking a coat of polish to make it look nice:

An Introduction to Interactive Programming in Python (Part 1) - Rice University About the Course This two-part course (part 2 is available here) is designed to help students with very little or no computing background learn the basics of building simple interactive applications. Our language of choice, Python, is an easy-to learn, high-level computer language that is used in many of the computational courses offered on Coursera. To make learning Python easy, we have developed a new browser-based programming environment that makes developing interactive applications in Python simple.

CSS Tutorial - Learn CSS Codes and Layouts CSS stands for Cascading Style Sheets. It is a stylesheet language that acts as the presentation layer for markup languages such as HTML and XHTML. The presence of CSS allows us to separate the layout component from the information component. Download Microsoft Paint / Recover Missing Copy This guide is for people who removed or accidentally un-installed their Microsoft Paint on their Windows, but now want them back. I lost my MS Paint too two days ago, poking at the wrong place of my Add/Remove Windows Component and there goes my mspaint. It can only be re-installed with a Windows XP CD in my case, but I don’t have any with me.

Creating Animated Scoring in an HTML5 Phaser Game When it comes to games (and apps in general really), I’m a big believer that making your game just that little bit more juicy can make the overall quality and enjoyability of your game increase drastically. Juicy is clearly a pretty vague term, but I think it’s pretty fitting (think biting into a juicy orange filled with flavour). In the context of a game this would mean adding things like: Python What is Python? From the official Python FAQ: "Python is an interpreted, interactive, object-oriented programming language. It incorporates modules, exceptions, dynamic typing, very high level dynamic data types, and classes. Python combines remarkable power with very clear syntax. It has interfaces to many system calls and libraries, as well as to various window systems, and is extensible in C or C++.