Cannabis is Key to Good Health When We Eat it vs. Smoke it 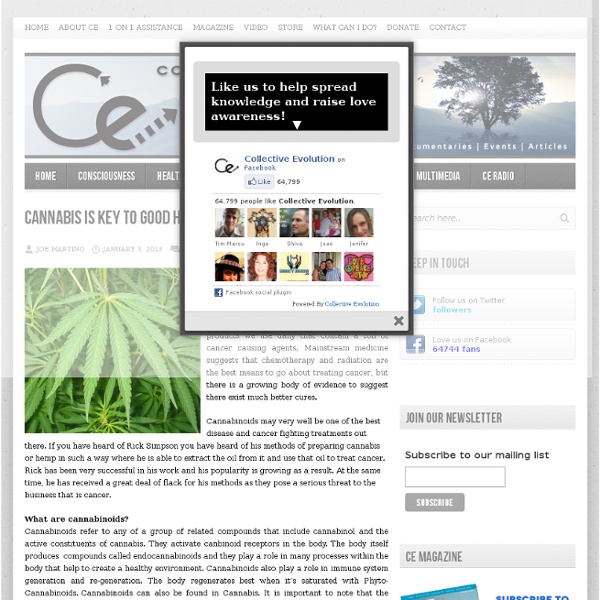 It is no secret that our world is seeing a huge increase in poor health and cancer cases. It should come as no surprise when we look at what we eat daily, the condition of our environment and the types of body care products we use daily that contain a ton of cancer causing agents. Mainstream medicine suggests that chemotherapy and radiation are the best means to go about treating cancer, but there is a growing body of evidence to suggest there exist much better cures. Cannabinoids may very well be one of the best disease and cancer fighting treatments out there. What are cannabinoids? Cannabinoids have been proven to reduce cancer cells as they have a great impact on the rebuilding of the immune system. Cannabinoids can prevent cancer, reduce heart attacks by 66% and insulin dependent diabetes by 58%. “If you heat the plant, you will decarboxylate THC-acid and you will get high, you”ll get your 10 mg.

Sepp Hasslberger Brain imaging insight into cannabis as a pain killer Public release date: 20-Dec-2012 [ Print | E-mail Share ] [ Close Window ] Contact: Press Officepress.office@admin.ox.ac.uk 44-186-528-0530University of Oxford The pain relief offered by cannabis varies greatly between individuals, a brain imaging study carried out at the University of Oxford suggests. The researchers found that an oral tablet of THC, the psychoactive ingredient in cannabis, tended to make the experience of pain more bearable, rather than actually reduce the intensity of the pain. MRI brain imaging showed reduced activity in key areas of the brain that substantiated the pain relief the study participants experienced. 'We have revealed new information about the neural basis of cannabis-induced pain relief,' says Dr Michael Lee of Oxford University's Centre for Functional Magnetic Resonance Imaging of the Brain (FMRIB). He adds: 'Our small-scale study, in a controlled setting, involved 12 healthy men and only one of many compounds that can be derived from cannabis. About PAIN®

Yoga, Postures, Yoga Postures for Anti-aging and Rejuvenation, pranayama These asanas specialize in brain and spinal rejuvenation, since this produces the maximum body and mind rejuvenation. These asanas will produce a healthy central nervous system (brain and spine), healthy glands, healthy internal organs, healthy joints and healthy skin. If you suffer from high blood pressure, dizziness or serious eye problems, you should not do the inverted postures (headstand, shoulder stand and reverse posture) until these conditions improve. A small proportion of people feel worse for up to two weeks after starting the asanas. This is because the yoga asanas cause die body to eliminate toxins. After this you will start to feel much better. Never exercise on a full stomach. After finishing the asanas, wait about a quarter of an hour before eating. Do the asanas in the garden or in a room with the windows open. Concentrate on the particular organs and glands which the asana affects. After each asana or group of asanas, rest for a short while.

Holder Holds the Power to Reschedule Marijuana–And Better Our Society | Marijuana This piece was written by Anthony Burke, Chief Scientific Officer for Ghost Group Politicians should not have the ability to hide from physical science and enforce draconian laws based on unfounded and outdated claims. Since physical sciences utilize the scientific method and quantitative measurements to verify hypotheses, the results are proven beyond reasonable doubts. Marijuana legislation defies logic, and it’s classification as a Schedule I narcotic is not based on current scientific knowledge. Marijuana and other drugs are regulated by the Controlled Substances Act of 1970, which was passed by the 91st U.S. In the legislation, five categories (known as Schedules) were created to determine how various drugs would be regulated, with Schedule I being the most harmful. A quick look at marijuana’s sister Schedule I Drugs shows the absurd methodology in place: How did we get here? For information on recent legislation regarding rescheduling of marijuana click here.

Andreas Ludwig Kalcker | Parasites Copyright © 2012 Miriam C. Maceda & Andreas L. Kalcker English Translation: Mercy AcevedoProof Reading: Karl Wagner Version 1.1 – Revision 1.02 - August 12, 2012 Parasitic infections are very common, more than you think and may or may not cause us serious health complications. The great migratory movements of population, rapid transportation, and trading, have shortened the distances and diseases that used to be common localized diseases, turned into universal common ailments and vice versa; parasites previously confined to very specific areas, appear in other locations far away from their initial focus.

Medical Cannabis: New Hope For Babies Born With Brain Injuries With support for the nationwide legalization of medical marijuana on the rise, scientists are finally conducting valuable research on cannabinoids – the compounds found in cannabis – to understand their potential use in the treatment of an expanding range of ailments and conditions. A study conducted by the Society of Cannabis Clinicians suggests cannabis as a viable treatment for infants suffering from perinatal brain injuries – which occur shortly before, during, or after birth. There are many causes of trauma to the young, vulnerable brain, however, there are very few treatments available today. Cannabis could be the answer that families of debilitated children have been praying for. Perinatal Brain Injuries The causes of perinatal brain injuries include neonatal asphyxia, neonatal hypoxia-ischemia, and/or stroke-induced focal ischemia. Stopping the damage; triggering repair So, not only will the use of cannabis help prevent further cell death, it could also aid in brain repair.

7 Foods That Make Your Liver Glow in the Dark by TC – 1/18/2013 Given the dearth of rare earths, heavy metals, and various chemicals available to industry, I don't know why they don't just start mining human livers. The blackened, pock marked, cirrhotic, old-football-of-a-liver found in the corpse of most average dead Americans would no doubt yield an impressive array of compounds, some of which may have contributed to the demise of said Americans. Hell, if someone wants to start a company to extract that chemical bounty, I'm in. Still, the less entrepreneurial side of me wishes that it weren't so; that Americans would actually show a little concern for what they eat, that they'd take a little time to learn what foods they might legitimately avoid instead of shaking in their boots over the faddish boogie-man food of the month. (Yeah, I'm talking to you, you gluten avoiding, GMO fearing, ax-wielding modern-day Carrie Nations.) 1. 2. It'll be covered with sprouts, right? If only that was the sole problem. 3. 4. 5. High praise indeed. 6.

All The Reasons Pot Is Good For You Survival Seeds - The Survival Seed Bank Provides a Lifetime Food Solution for Families Low doses of THC (cannabis) can halt brain damage, study suggests May 30, 2013 — hough marijuana is a well-known recreational drug, extensive scientific research has been conducted on the therapeutic properties of marijuana in the last decade. Medical cannabis is often used by sufferers of chronic ailments, including cancer and post-traumatic stress disorder, to combat pain, insomnia, lack of appetite, and other symptoms. Now Prof. Yosef Sarne of Tel Aviv University's Adelson Center for the Biology of Addictive Diseases at the Sackler Faculty of Medicine says that the drug has neuroprotective qualities as well. He has found that extremely low doses of THC -- the psychoactive component of marijuana -- protects the brain from long-term cognitive damage in the wake of injury from hypoxia (lack of oxygen), seizures, or toxic drugs. Brain damage can have consequences ranging from mild cognitive deficits to severe neurological damage. Conditioning the brain While performing experiments on the biology of cannabis, Prof. Preventative and long-term use Prof.

Jake Shannon -Anomalist- | Why I am a Libertarian Minarchist. Medical cannabis Cannabis indica fluid extract, American Druggists Syndicate, pre-1937. A dried bud of Trainwreck strain cannabis Cannabis has been used to reduce nausea and vomiting in chemotherapy and people with HIV/AIDS, and to treat pain and muscle spasticity;[6] its use for other medical applications has been studied, but there is insufficient data for conclusions about safety and efficacy. Medical uses Cannabis as illustrated in Köhler's book of medicinal plants from 1897 Medical cannabis has several potential beneficial effects.[9][10] Cannabinoids can serve as appetite stimulants, antiemetics, antispasmodics, and have some analgesic effects,[1] may be helpful treating chronic non-cancerous pain, or vomiting and nausea caused by chemotherapy. The Institute of Medicine, run by the United States National Academy of Sciences, conducted a comprehensive study in 1999[dated info] assessing the potential health benefits of cannabis and its constituent cannabinoids. Nausea and vomiting Pain Adverse effects

(1) Facebook Medical Marijuana is Being Used to Successfully Treat the Symptoms of Lupus in Patients Zach Reichard January 7, 2013 What is Lupus? Lupus is a chronic inflammatory disease that can affect various parts of the body, primarily the skin, joints, kidney, and brain. According to the Lupus Foundation of America, “One and a half to two million American’s have a form of the disease, and it’s more common than muscular dystrophy, cystic fibrosis, leukemia, and cerebral palsy.” Systemic Lupus Erythematosus (SLE) is the most common form of the disorder that largely affects the skin, joints, kidney, and brain. The condition, Lupus Nephritis, typically results in dialysis or a kidney transplant. One form of this disease that is particularly interesting is known as Drug-Induced Lupus. “There are some 400 prescription drugs that can also cause the condition.” Neonatal Lupus is a rare version of the disease that affects children of women who suffer from the disorder. What Causes Lupus? Everyone that suffers from SLE experiences some type of joint pain or swelling, and some develop arthritis.