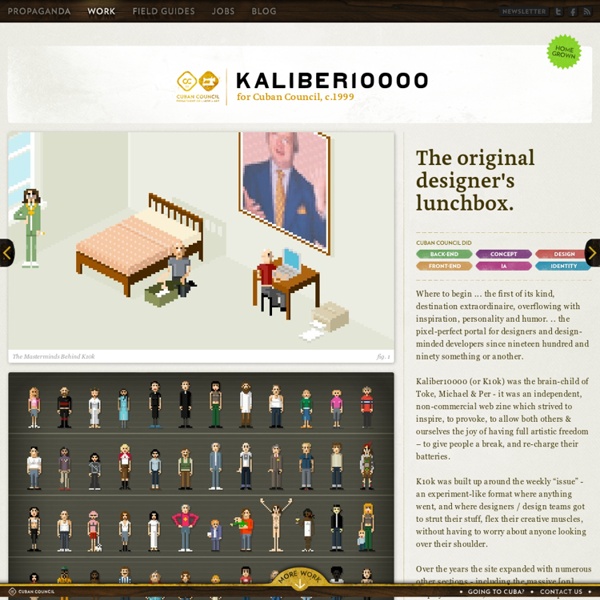 Cuban Council Did Backend Concept Design Frontend IA Identity Where to begin ... the first of its kind, destination extraordinaire, overflowing with inspiration, personality and humor. .. the pixel-perfect portal for designers and design-minded developers since nineteen hundred and ninety something or another. Kaliber10000 (or K10k) was the brain-child of Toke, Michael & Per - it was an independent, non-commercial web zine which strived to inspire, to provoke, to allow both others & ourselves the joy of having full artistic freedom – to give people a break, and re-charge their batteries. K10k was built up around the weekly “issue” - an experiment-like format where anything went, and where designers / design teams got to strut their stuff, flex their creative muscles, without having to worry about anyone looking over their shoulder. While there's a deep fondness for the community, artwork and innovation that was catalyzed by K10k, we are strong believers that timing is everything.

Mini Wizard Studios - Pixel art - Isometric Objects MWS » Pixels » Isometric » Objects A collection of furniture and other objects from the mobile phone game"My Life" (released in China, 2006). Some sample objects from a medieval Chinese RPG game for mobile phones called "Swordsman". (Translated English name) An isometric chessboard and abstract playing pieces. 10 Most Shocking Anti-Anorexia Campaigns The author of the campaign is famous Italian photographer Oliviero Toscani, for the talian fashion brand Nolita. The campaign is destined to young women in Italy who keep up with fashion and is called to draw public attention to such awful disease as anorexia. The ads, which are aimed at raising awareness about eating disorders, feature Isabelle Caro, a French woman, who had battled the disease for more than 15 years, shows her exposed breasts and frail, naked body. She had said that she was decided to show her body for people to know and to see how the disease impacts the body. The advertising campaign is considered to be controversial because there are people who think the photo is too crude. Unfortunately Caro died on 17 November 2010 in France.

Kula ring Kula, also known as the kula exchange or kula ring, is a ceremonial exchange system conducted in the Milne Bay Province of Papua New Guinea. The Kula ring was made famous by the father of modern Anthropology, Bronislaw Malinowski, who used this test case to argue for the universality of rational decision making (even among 'natives'), and for the cultural nature of the object of their effort. Malinowski's path-breaking work, Argonauts of the Western Pacific (1922),[1] directly confronted the question, "why would men risk life and limb to travel across huge expanses of dangerous ocean to give away what appear to be worthless trinkets?" Malinowski carefully traced the network of exchanges of bracelets and necklaces across the Trobriand Islands, and established that they were part of a system of exchange (the Kula ring), and that this exchange system was clearly linked to political authority.

Denise wilton, illustration Selected work, both client and personal. (Click on the images to see them full size) Dorling Kindersley: Body Preservation Dorling Kindersley: Blood Soldiers chumby Chumby Industries closed its doors in December 2011, and laid off all of its employees. Since then, the service has been maintained by a small group of volunteers, and paid for by a succession of companies. The volunteers were notified that the funding would cease at the end of February, 2013, with the prospect of the devices being rendered completely useless. In January 2013, one of the volunteers initiated an effort to create a company to acquire all of the remaining assets of Chumby Industries for the purpose of maintaining the service.

20+ Inspiring Pixel Artists, Tutorials, and Resources Pixel by painstakingly crafted pixel, artists create masterpieces styled as early video game art. Let's take a look at some of the top pixel art studios and artists that will leave your mouth dripping with wet little squares. Then we'll review a wide range of beginner to comprehensive pixel art tutorials. And don't miss all the articles, resources, and collection of other cool stuff to be found in this solid collection of pure pixel love.

Practical News &amp; Case Studies on Internet Advertising, Marketing &amp; PR Happy tenth birthday to viral online marketing.On July 4, 1996, Hotmail founders Jack Smith and Sabeer Bhatia launched what's widely credited to be the first on-purpose Internet viral marketing campaign. Back then there was no online video, no easy peer-to-peer file sharing, no sophisticated games and practically no HTML email. Instead, this groundbreaking campaign was a just a simple line of text stuck at the end of every single email sent that offered recipients their own free account.Within 18 months the service had 8.7 million users, and Smith and Bhatia sold out for an estimated $400 million to MSN.Now, tens of thousands of campaigns later, viral's settled into what you could call a rut. Despite the fact that every campaign's success depends on being so creative, so utterly forwardable, that consumers can't help but spread the news, most campaigns are cookie cutter.You know the drill. Glory be!

Keysonic wireless keyboard - a (Mac) mini review by Marc Recently I bought a Mac Mini . It’s finally usurped my trusty Xbox Media Center as a next generation Media Center PC and will doubtless receive a writeup of it’s own one day. Great though the Mini is, you still need a keyboard and mouse to control it and that’s the subject of this post.