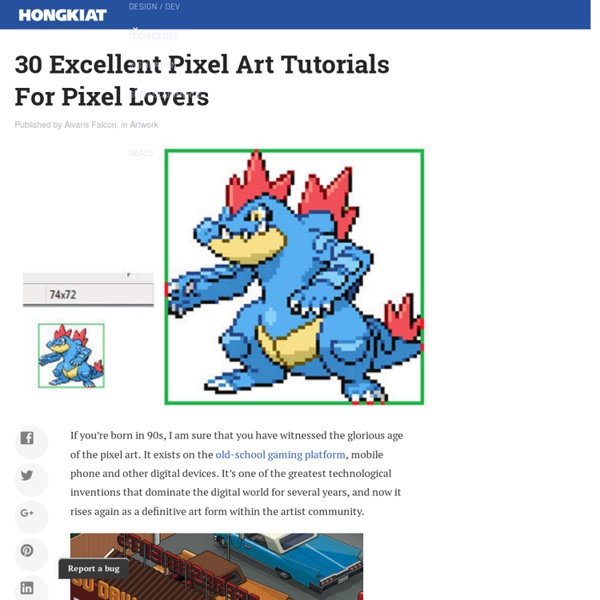 If you’re born in 90s, I am sure that you have witnessed the glorious age of the pixel art. It exists on the old-school gaming platform, mobile phone and other digital devices. It’s one of the greatest technological inventions that dominate the digital world for several years, and now it rises again as a definitive art form within the artist community. Doing the pixel art could mean that you’re striving for perfection, as you even need to manually craft out the shading, dithering and even anti-aliasing. That means you have to draw the artwork pixel by pixel! Therefore it’s called pixel art. Today, with the aim to provide you a solid understanding of the pixel art and its essential techniques, we want to showcase to you 30 detailed and inspiring tutorials by talented pixel artists to help you carve out possibly one of the most detailed works in your life. Try on them and you’ll know, full list of tutorials after jump! Recommended Reading: 50 Beautiful and Creative Pixel Arts Textures Tree

MS Paint Tricks MS Paint Tricks by Messenjah MSPaint is actually a very powerful image editor. Here's all the things about MSPaint you probably didn't know. Chapter 1 - Brush Scaling Create a Mummy Text Effect In Illustrator Halloween is in a couple days and why not celebrate by creating a mummy styled text treatment? In this tutorial you will learn how to create this treatment with some gradients and, of course, heavy use of the Appearance panel. There isn’t a lot of steps but the tutorial is slightly more advanced than previous tutorials. Final Image Below if the final text treatment we will be working towards. Tutorial Details

The Big List Of Pixel Art Tutorials The Big List Of Pixel Art Tutorials On this list you will find a few links to pixel art related stuff…Update: All below mentioned tutorials can now be found on PixelArtus moreover there is also another big list about Drawing and Animation. Pixel Art Freelance Guide Download Microsoft Paint / Recover Missing Copy This guide is for people who removed or accidentally un-installed their Microsoft Paint on their Windows, but now want them back. I lost my MS Paint too two days ago, poking at the wrong place of my Add/Remove Windows Component and there goes my mspaint. It can only be re-installed with a Windows XP CD in my case, but I don’t have any with me. If your Paint is gone from your computer too, do this to make sure the software really does not exist in your system, and not just the shortcut being deleted. Go to Start > Run > Type “mspaint” > OK.

Made by Pixelate – Understanding Games Understanding Games is series of four games explaining the basic concepts of video games. The tutorial-style episodes deal with rules, motivation, learning and identification in video games. The player is guided through each episode by the narrators Bob and Bub, who explain core concepts of games to the player. learn how to create pixel art, the workflow, how to create pixel characters and pixel artwork, shading, dithering, isometric projection and all techniques involved Images that are used by the computer can be roughly divided into two groups. The first type of images is the so-called bitmap graphic or raster graphic image; the second type is the vector graphic. The fundamental building blocks of vector graphics are vectors, hence the name. A vector is a mathematical description of a line or a curved line. Adobe Illustrator uses so-called 'Bezier curves' to describe an image. A vector graphic can be resized without any loss of quality, unlike a bitmap graphic.

The Cave of Dragonflies I care about the truth, and I strive to keep the information on this website accurate and up-to-date. For instance, where possible, I have taken pains to personally test claims about the video games before making them. However, doing so is not always feasible, occasionally I manage to be wrong even when I think I've confirmed something, and with a website of this size, it's difficult to keep track of every single piece of information anywhere on it that might need to be changed or updated. Thus, if you spot any errors, mistakes or out-of-date tidbits - or even just typos - I'd be thrilled if you would report them via this form.

Palette Extractor - © The Sun Walkers Hello and thank you for using Palette Extractor ! As there is a lot of people using it each month, I'm working on improving this tool. Here are some features you'll find in next updates : Statistics (total number of colors, average number of colors per extraction, mean hue, ... etc) Creating an account so you can save your palettes in your own space. This might also use OAuth for you to login with your Facebook, Google or DeviantArt account.

A Japanese MOTHER 4 April Fool's Joke « EarthBound Central May 8th, 2014 | Images, MOTHER 4, Rumors I thought I’d share this little April Fool’s joke that a Japanese MOTHER fan made: Nintendo Officially Announces MOTHER 4It’s about time!They said they were gonna stop at 3, but they’re gonna make a sequel anyway?I assume the story takes place much earlier than 3, since the world’s been destroyed and all by then. It looks like the Kraken’s in it again…I wonder if it’ll be set in the same world as 2.It’s supposed to come out January next year. Proto:Monster Party - The Cutting Room Floor This page details one or more prototype versions of Monster Party. After repeatedly falling into the hands of collectors that were unwilling to release it to the public, a Japanese prototype of Monster Party (titled "Parody World: Monster Party") was finally released on July 3, 2014 for everyone to enjoy. As the original title implies, the prototype features many parodies of movies like Gremlins and Planet of the Apes that were unfortunately removed for copyright reasons, as well as a number of other differences. General Differences The timing code for the status bar split was changed to be less glitchy in the US version.It is possible to get stuck in place in the prototype, requiring a reset. Thankfully, this seems to be pretty rare.Item drops were shuffled around in the US version; for example, the first enemy drops a pill in the prototype, and nothing in the US version.

Turning 8-Bit Sprites into Printable 3D Models Continuing in the recreational spirit of this blog, this week I want to write about something purely fun. In particular, I’m going to tell you how to convert retro 16 x 16 sprites into 3D miniatures: Turning an 8-bit sprite into a 3D model