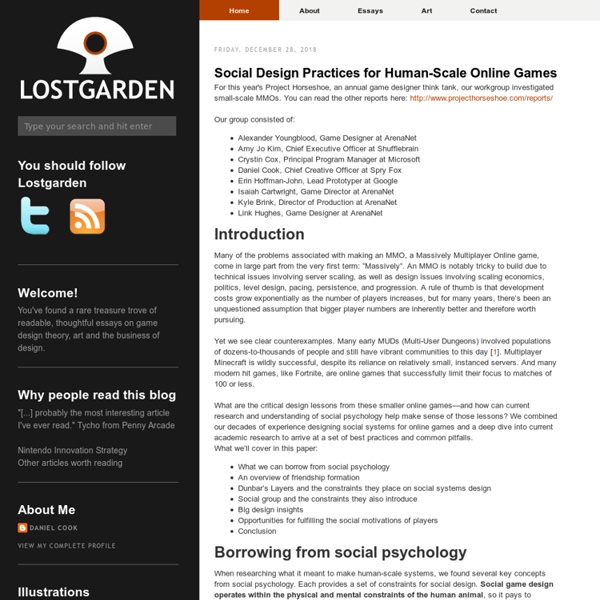 How do we get players to play together in a manner that fits their schedules? This is a key logistical challenge a designer faces when building multiplayer games. The promise We are seeing a blossoming of innovative multiplayer systems. In previous eras there were a handful of default models that games might use (matches, play-by-mail). Games today exist on a spectrum from fully concurrent to fully asynchronous and everything in between. A game like Dark Souls is predominantly single player, but includes interactions that are asynchronous (the leaving of messages and deaths) or fully concurrent (the joining of another player into your game for PvP or Coop.)

The Designer's Notebook: Eight Ways To Make a Bad Tutorial [In his latest Designer's Notebook column, veteran Ernest Adams takes a frank and factual look at in-game tutorials, explaining exactly what games do wrong so you can make sure that, when you set out to create your tutorial, you do it right.] In the early days of the game industry there were video games (console or arcade) and home computer games. Video games threw you into the deep end of the pool: you faced an onslaught of enemies with minimal instruction and you either sank or swam. Mostly you sank, which is how arcade games made their money. Computer games were more complicated than arcade games, so they gave the players manuals to read before starting to play. Steve Jobs Resigns as CEO of Apple Steve Jobs, co-founder and two-time CEO of Apple, offered his resignation to the company's board Wednesday. "I have always said if there ever came a day when I could no longer meet my duties and expectations as Apple’s CEO, I would be the first to let you know," he wrote. "Unfortunately, that day has come." Jobs has been in poor health for some time.

pushing buttons... An atomic theory of fun game design This is the original essay in which I worked out the basics of my game grammar approach. It later became a GDC talk. This essay was written in 2004, and the genesis of it was working through issues with the crafting system in Everquest II with Rod Humble. This essay no longer represents my current understanding of game grammar, but it’s a decent start. This essay has never been publicly posted (it was originally posted only to a private game developer forum, on June 26th of 2004), but I thought I should make it available both for historical interest and also for the sake of clarifying some of the things that I now take for granted when I discuss game design here on the blog.

Issue 1202, 2012 The Algorithmic Experience: Portal as Art by Michael Burden, Sean Gouglas Art requires criticism. Portal transcends videogame tropes: it explores the human struggle against algorithmic processes through complex parallels between the player, Chell, the companion cube, and GLaDOS. Increasingly complex frustrations are experienced directly through the game’s aesthetic of play - a freedom bounded by algorithmic control. [more] 60 Mind-Blowing Hand Drawn Website Designs for Your Inspiration Although digital arts is much appreciated and renowned in the world wide web, it’s undeniable that hand drawn sketches are equally impressive and delightful. Using hand drawn designs as webpage backgrounds, designer portfolios and illustrator portfolios, is getting popular these days. It has that artistic and personal touch that awes people, and not to mention it surprises the viewers too. It attracts artsy people from digital, animation/cartoon, sketch, and other art fields unmentioned.

How to Fight Plagiarism - Tips and Tools Plagiarism is not hard to fight now that there are advanced tools and services that people can use for protection. In this article we will talk about how to fight people who have copied your designs, bandwidth, articles, music, and everything that can be stolen. Preventing people from plagiarizing your works is another matter because it is in their discretion to do so, which is out of your control. But when the unwanted happens you should be prepared to deal with it, that’s why I wrote this article; to help you fight plagiarism with some tips and tools. The last time I checked one of my published articles on CopyScape to see if anyone copied it, it returned 8 websites. 12 Tips for Creating a Great Portfolio Site Sep 15 2009 If you’re a designer, artist, or photographer, chances are you need to display your work online. And while there are sites out there that will host your portfolio for you, their solutions are often not quite what you were looking for. Below are twelve tips for creating a better portfolio site. These suggestions apply to all kinds of portfolios, no matter what your particular artistic field. Also included are examples and a gallery of excellent portfolio sites, with what they’re doing right and what could use some improvement.

35 Brilliant Resume Designs at DzineBlog Learn how to earn $125 or more per hour as a freelancer - Click Here Looking for hosting?. We recommend MediaTemple for web hosting. Use Code MTLOVESDESIGN for 20% off