Find pronunciation, clear meanings and definitions of words at OxfordLearnersDictionaries.com 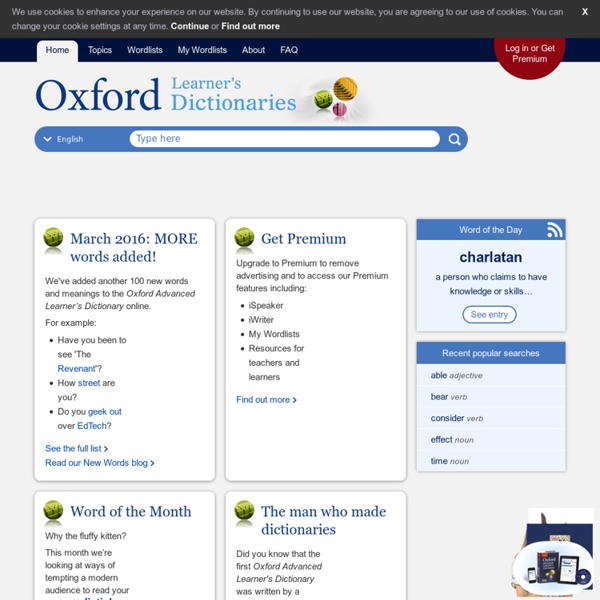 Irish Saints There are hundreds of Irish saints. Here they are by name alphabetically, or by feast day. Many of these saints were canonized in the early middle ages, and not much is known about them except for their names and possibly a feast day. A B C D E F G H-I J-K L M N O-P R S T-U If you haven't done so already, non-Irish speakers please see the the pronunciation guide. * names in italics represents names that have no etymological connection to the Irish name, but were used as English "translations" based upon the fact that they have similar sounds or meanings. The Listening Project The Listening Project is a partnership between BBC Radio and the British Library that invites people to share an intimate conversation, to be recorded and broadcast by the BBC and, if suitable, curated and archived by the British Library. These conversations will form a unique picture of our lives today, preserved for future generations. Visit The Listening Project website (BBC) and get involved.

ESL Worksheets, English Word Formation, Prefixes, Suffixes Teach Kids to Read with Phonics - Games, Videos, Worksheeets Word Formation Worksheets Prefixes and Suffixes- Affixes & Root Words to Guess Meaning A prefix is a letter or group of letters added to the beginning of a word to make a new word: In the word '”UNHAPPY”, 'UN-' is a prefix added to HAPPY. UN- is a Latin word for NOT. A suffix on the other hand is a letter or group of letters added to the end of a word to make another word. 100+ Sites to Download All Sorts of Things These days you can find all sorts of things online, from audio books to flash files, from sound effects to CSS templates. Below we compiled a list with over 100 download sites that serve that purpose. We will also try to keep the list updated, so if your favorite download site is not here, let us know about it with a comment. Audio Books Librivox: One of the most popular audio libraries on the web. The LibriVox volunteers record books that are in the public domain and release them for free.

UK slang for international students By Sophie Cannon at Education UK, 27 January 2014 'Hiya mate, fancy a cuppa and a chin-wag?' 'I can't sorry pal, I'm skint. Over 500 Social Change Documentaries on 1 Page Just imagine what could become possible if an entire city had seen just one of the documentaries above. Just imagine what would be possible if everyone in the country was aware of how unhealthy the mainstream media was for our future and started turning to independent sources in droves. Creating a better world really does start with an informed citizenry, and there's lots of subject matter to cover. From all the documentaries above, it's evident that our society needs a new story to belong to. The old story of empire and dominion over the earth has to be looked at in the full light of day - all of our ambient cultural stories and values that we take for granted and which remain invisible must become visible.

20 Misused Words That Make Smart People Look Dumb  We're all tempted to use words that we're not too familiar with. If this were the only problem, I wouldn't have much to write about. That's because we're cautious with words we're unsure of and, thus, they don't create much of an issue for us. It's the words that we think we're using correctly that wreak the most havoc. We throw them around in meetings, e-mails and important documents (such as resumes and client reports), and they land, like fingernails across a chalkboard, on everyone who has to hear or read them. Nietzsche: Beyond Good and Evil A brilliant young man, he was appointed professor at the University of Basel aged 24 having not even finished his degree. His evanescent philosophical life ended 20 years later when he went insane and died shortly afterwards. Nietzsche's argued that the Christian system of faith and worship was not only incorrect, but harmful to society because it allowed the weak to rule the strong - it suppressed the will to power which was the driving force of human character.

English Skills: 7 ways of saying “I don’t know” In this second post dedicated to life skills in English, I’d like to focus on the different ways you can say “I don’t know” in English. As my clients will tell you, saying “I don’t know” to me is not an option in our lessons! I will not allow my clients to rely on me to give them the answers before they have tried themselves to seek the answers. However, in life we are at some stage going to have to use this expression, so as variety is the spice of life, using different ways to say “I don’t know” would make your conversation far more interesting and natural. As in the first post of the series, my inspiration comes from Macmillan Dictionary blog‘s own series.

50 Popular English Idioms to Sound Like a Native Speaker To understand English as it is spoken in real life, you have to be familiar with idioms. They are used so much in everyday English that it is important to be aware of them. You need to learn what they mean, and how to use them to become an ‘insider’. This blog post will show you some of the most popular English idioms currently in use. Remember, knowledge is power.