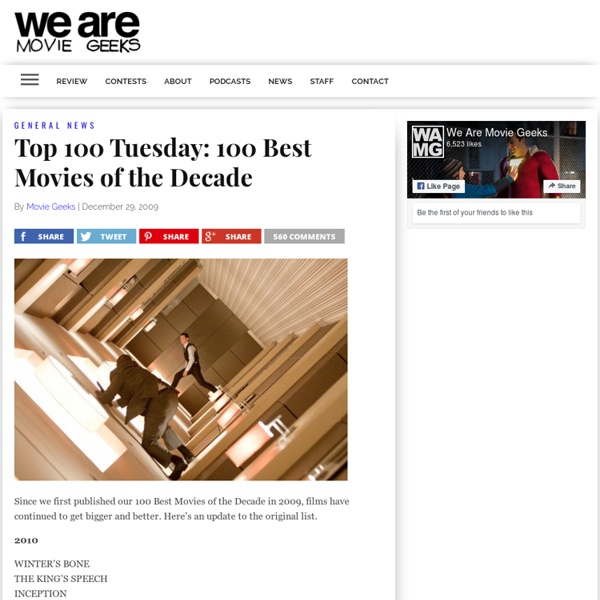 Top Ten Films 1930-2009 2019 1. LEAVING NEVERLAND (Dan Reed) 2. APOLLO 11 (Todd Douglas Miller) 3. THE BEACH BUM (Harmony Korine) 4. BAIT (Mark Jenkin) 5. Row Three » Brave New Worldview – 30 Science Fiction Films of the 21st Century A decade into the 21st Century and we have arrived at the future. The promise of Tomorrow. But instead we have looming energy crises, endless middle east conflict and more disappointing, we have no flying cars, Heck, for all the bright and clean future promised in 2001: A Space Odyssey, none of the real companies used as brands in the film even exist anymore. Even moving from the late 1960s to the mid 1980s, nobody makes DeLoreans (although they occasionally sell on Ebay), but cloning and tablet computing (as promised by Star Trek: The Next Generation) have more or less come to pass in this century. It is not the gizmos or the distopian aesthetics, that have brought Science Fiction into the new millennium, but the questions it asks of people or society in a future time or place and how they reflect on our own times.

Need a Basecamp Alternative? Basecamp prides itself on providing their customers, for 17 years now, with the utmost user-friendly program. Their goal is to continue providing their basecampers with a product that is at the highest level of integrity and quality. Oh but wait! The Filthy Archives - Big Empire Movie Reviews A-D || E-I || J-M || N-R || S-V || W-Z See who won the 2001 Filthies See who the 2000 Filthies See who the Filthy Readers picked in 1999 See who won the 1999 Filthies See Who Won the 1998 Filthies Top 10 underappreciated kids movies from the last 20 years Before we get started, one note: I do appreciate that some films on this list earned a lot of critical acclaim, or pulled in a reasonable amount of cash. The point, though, is that these are the films that have been seemingly forgotten about. And that's a fate they simply don't deserve.

What's the Saddest Movie of All Time? What's the saddest movie of all time? Although this may seem like a question that's open for debate, there is actually a scientific answer. According to Smithsonian.com, a scientific study from the University of California at Berkeley has determined that the saddest movie of all time is "The Champ." The 1979 film tells the story of a washed-up boxer who returns to the ring to try and make enough money to retain custody of his son. The study found that the scene in the movie that consistently caused the most people to cry was when "The Champ" dies as his son pleads for him to wake up. Agree?

Mozilla Firefox How to install VNC on a remote machine. To do this, you need the following files. 1. omnithread_rt.dll 2. VNCHooks.dll 3. winvnc.exe 4. vnc.reg 5. reg.exe and 6. vncviewer.exe Yes Virginia, That Is Linux Running on JavaScript JavaScript never seems to get any respect. It’s not a real programming language, detractors complain, it’s just some script language that runs in the web browser. We’re not sure what makes JavaScript less “real” to some, but thanks to today’s web browsers, JavaScript has become a very powerful language. The top 25 must-see movies of 2012 Update: You can now find out list of the top 25 must-see movies of 2013 here.And our 25 must-see movies of 2014 are here. As 2011 draws to a close, one eye is inevitably on the treats that are lying ahead for 2012. With that in mind, we've got our line-up of, as things stands, the 25 films that are brightest on our radar. Now, a couple of disclaimers.

50 Best Movies of 2010 Much has been debated about the quality of the top movies released this year, but that we were able to pull together a list of the 50 best movies of 2010 means it couldn't have been so bad after all. After the jump, we count down our favorite movies of the year, from the mind-bending 'Inception' to the movie that may have defined our generation, 'The Social Network.' Think you can figure out which movie topped our list? There's only one way to find out. - the Moviefone Editors, Dec. 21, 2010