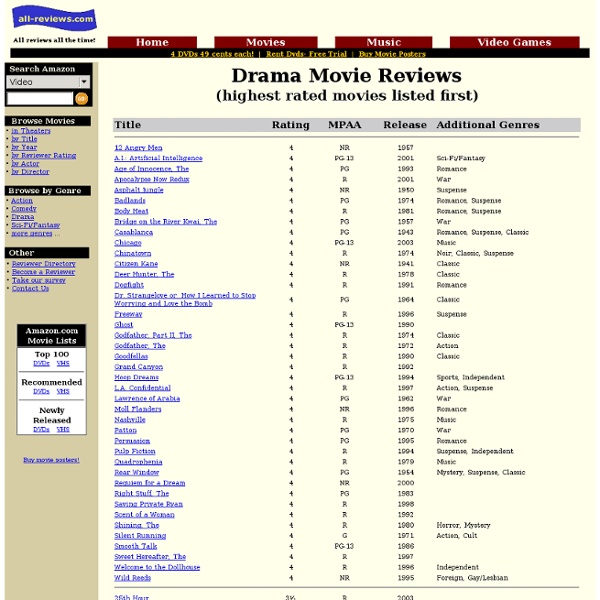 Top 40 best free legal movies you can download right now While you constantly hear about how downloading movies is illegal, there are numerous free legal movies you can download. Sure we aren’t talking about the latest summer blockbusters here, but there are some great films out there on the Internet that can be had for free. The Internet Archive works to bring together anything and everything that resides in the public domain, and that includes movies. You may also be interested in David Cassel’s compilation of the top 40 best free comedy movies you can watch right now compiled in 2011. Drama A Star Is Born: This 1937 version of a story of a rising star in Hollywood was remade twice, once in 1954 with Judy Garland and again in 1976 with Barbara Streisand. Bronenosets Potyomkin (Battleship Potemkin): A major turning point in the production of silent movies that took the camera out of being something that didn’t move to actually being involved in the story. Last of the Mohicans: A 1920 silent film adaptation of the novel. Family Mystery/Thriller

15 Amazing Animated Short films We all love short animated films, but creating short film is very hard task. Putting whole story in 5 to 10 minutes is not easy. Can you imagine? Few films produced after working hard more than 6 years! Here we collected 15 dazzling animated short films for your inspiration. I bet you will love these short animated movies, do let us know your favorite one, also feel free to share your favorite short film if it’s not present in the list. Granny O’Grimm’s Sleeping Beauty Oscar-nominated film of ‘Granny O’Grimm’, directed by Nicky Phelan, produced by Brown Bag Films, and written/voiced by Kathleen O’Rourke. Oktapodi (2007) In Oktapodi, these two cuties help each other escape the clutches of a tyrannical restaurant cook. This Side Up – A Short Animation by Liron Topaz A naive music-lover’s patience is tested on his quest to download music online, as his perspective on technology completely changes. Oxygen Oxygen tries to make friends on the playground. Marcelino and Bartolomeo: Bye Bye! Alma

Year in Review: The Best Foreign Films of 2010 Welcome to my list of the best foreign films of the year! In case you’re wondering why certain films appear to be missing there are a few factors to take into account. First, films like Mother, A Prophet, The Good the Bad the Weird, and The Secret In Their Eyes are movies that made previous lists. Second, I haven’t seen everything that was released this year. And third, your favorite foreign release from 2010 may actually have been a piece of shit. I kid. But seriously, these are my picks for the ten best foreign language movies of the year in alphabetical order. About Elly (Iran) A group of friends take a weekend trip, but when one of them goes missing the truth about who she was gets lost in a haze of suspicion, judgment, and fear. Bedevilled (South Korea) An ugly incident in the city sends a woman home to the rural island where she grew up, but she discovers life there has become a living hell for her childhood friend. Click here to see the final eight >>

Skip MegaVideo Time limit + New .COMs $7.99/yr plus 18 cents/yr ICANN fee. Discount based on new one-year registration prices as of 1/27/2012 with sale price reflected in your shopping cart at checkout. Discount applies to new registrations and renewals and cannot be used in conjunction with any other offer or promotion. Domains purchased through this offer will renew at regular price after the initial term has expired. Offer ends May 31, 2012 5:00 pm (MST). † Good for one 1-year registration of any available .COM, .US, .BIZ, .INFO, .NET or .ORG ‡ Annual discounts available on NEW purchases only. 1 GoDaddy.com is rated the world's largest hostname provider according to Netcraft®.

Empire Features 10,000 Empire readers, 150 of Hollywood's finest and 50 key film critics voted in the most ambitious movie poll evert attempted. 500. Ocean's Eleven (2001) Director: Steven Soderbergh Slick, suave and cooler than a penguin's knackers, Soderbergh's starry update of the Rat Pack crime caper not only outshines its predecessor, but all the lights of The Strip combined.Read our Ocean's Eleven review 499. Director: James Wan The never-ending stream of sequels may have diminished its impact, but there's no denying the shock we got when we first entered the puzzle-loving psycho Jigsaw's fiendish, deathtrapped world.Read our Saw review 498. Director: Robert Zemeckis From the past to the present to the future and back again, Zemeckis hits his time-travelling stride with this chronology-screwing popcorner - only seven years to go until we discover if his vision of 2015 was on the money.Read our Back to the Future Part II review 497. 496. 495. 494. 493. 492. 491. 490. 489. 488. 487. 486. 485. 484.

The 100 Best Films Of World Cinema | 100. Night Watch | Empire |... From Brazil to Japan to France and Senegal, from Neo-Realism to Dogme to J-horror, we've compiled a list of the very best films not in the English language (note: features, not documentaries). So rustle up some sushi, strike up a gauloise and make sure you've locked your bicycle as we count down the top 100 world cinema movies... 100. Year: 2004Country: RussiaDirector: Timur Bekmambetov It's Buffy meets The Matrix meets Blade! Hollywood remake? Stream Night Watch now with Amazon Video 99. Year: 1993Country: ChinaDirector: Yuen Woo-ping It's the Robin Hood story transferred to the Ch'ing Dynasty, helmed by Yuen Woo-ping, the martial arts director that would go onto create such western fighting spectaculars such as Kill Bill and The Matrix Trilogy. Hollywood remake? Buy Iron Monkey now on Amazon 98. Year: 1985Country: JapanDirector: Akira Kurosawa Akira Kurosawa was almost blind when he directed his biggest movie, in 1989, and yet it's possibly his most beautiful. Hollywood remake? 97. 96.