Nietzsche: Beyond Good and Evil 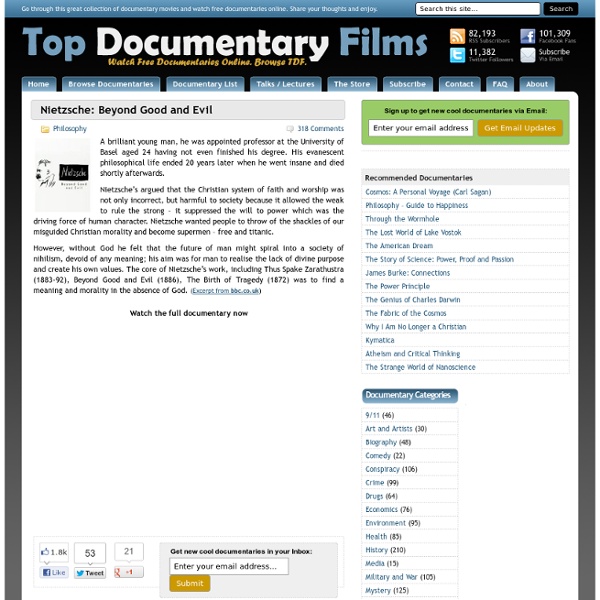 A brilliant young man, he was appointed professor at the University of Basel aged 24 having not even finished his degree. His evanescent philosophical life ended 20 years later when he went insane and died shortly afterwards. Nietzsche's argued that the Christian system of faith and worship was not only incorrect, but harmful to society because it allowed the weak to rule the strong - it suppressed the will to power which was the driving force of human character. Nietzsche wanted people to throw of the shackles of our misguided Christian morality and become supermen - free and titanic. However, without God he felt that the future of man might spiral into a society of nihilism, devoid of any meaning; his aim was for man to realise the lack of divine purpose and create his own values. The core of Nietzsche's work, including Thus Spake Zarathustra (1883-92), Beyond Good and Evil (1886), The Birth of Tragedy (1872) was to find a meaning and morality in the absence of God.

Heidegger: Thinking the Unthinkable German philosopher Martin Heidegger addressed the central question of human existence full on, by examining how human self-awareness depends on concepts of time and death. His preoccupation with ontology - the form of metaphysical inquiry concerned with the study of existence itself - dominated his work. The central idea of his complex Sein und Zeit (Being and Time) (1927) could be summed up in the phrase 'being is'. Man had to ask himself 'what is it to be?' and only by doing this, and standing back from absorption into objects and other distractions, could he actually exist. Heidegger also felt that art, like language, was important evidence of existence, something which was a real existence rather than a mere recreation of reality. Despite this, his work has been widely influential, especially on the thought of twentieth century philosophical giants such as Sartre, Lacan and Derrida. Watch the full documentary now -

Osho Talks Osho or Bhagwan Shree Rajneesh was born in 1931 in Central India. He was a charismatic and gifted speaker who became the leader of a worldwide new spiritual movement. It is said that at the age of 21 he attained enlightenment or Samadhi. At the time he was studying philosophy at the University of Saugar. On receiving a masters degree he taught philosophy at the University of Jabalpur for nine years. In 1970 he settled for a while in Mumbai. In 1981, Osho relocated to the United States and his followers established an intentional community, later known as Rajneeshpuram, in the state of Oregon. Osho was arrested shortly afterwards and charged with immigration violations. Watch the lectures now (playlist)

Sartre: The Road to Freedom To be told, you are responsible for the period of history that you are living in. You have not only the right to choose, but the duty to choose and if you are now surrounded by poverty, by war, by oppression, by cruelty - that is what you have chosen. Sartre was the leading advocate of atheistic existentialism in France but he was also interested in the novel, drama, literary criticism and politics. He is best remembered for his philosophical works and his idea of communistic existentialism which he expressed in novels and plays such as his debut novel Nausea (1939), which depicted man adrift in a godless universe, hostage to his own freedom. After the Second World War, during which he fought for the Resistance, he became increasingly interested in Marxism and his involvement with the French Communist party was part of his desire to overcome the economic and social "structures of choice" which he found restricting. Watch the full documentary now -

Einstein [History Channel] Waste = Food Man is the only creature that produces landfills. Natural resources are being depleted on a rapid scale while production and consumption are rising in na­tions like China and India. The waste production world wide is enormous and if we do not do anything we will soon have turned all our resources into one big messy landfill. But there is hope. A design and production concept that they call Cradle to Cradle. Large companies like Ford and Nike are working with McDonough and Braun­gart to change their production facilities and their products. Watch the full documentary now - Design the new Business Wegmans Cruelty Wegmans Cruelty is a half hour documentary produced by a small investigative team from the organization Compassionate Consumers. Organization members contacted Wegmans Food Markets to try to hold some meaningful dialogue about the conditions at Wegmans Egg Farm, and were then misled and dismissed by Wegmans representatives. The team set out to capture actual footage inside the farm and create a film based on their experience. The film features statements from Wegmans representatives, interviews with the investigators, and footage of what life and death is like inside of a battery cage facility. Approximately 98% of all eggs produced in the United States come from hens that are housed in battery cages. Often unknowingly, customers are supporting the practices of modern egg farming by purchasing eggs. Wegmans Food Markets, Inc. is a 68-store supermarket chain with stores in New York, Pennsylvania, New Jersey and Virginia. Watch the full documentary now

Human Evolution: Clash of The Cavemen In the ice-ravaged wilds of Europe, circa 25,000 BC, a range war like no other raged between two species of primitive man. In a unique moment in the world's history, these two species, Neanderthal and Cro-Magnon (Homo sapiens), competed for resources and for a permanent spot at the top of the animal kingdom. It was an epic battle of brains versus brawn that determined the course of human history. In this scenario, based on scientific theories, witness our prehistoric ancestors as they clash with a completely different species of humans, the Neanderthals, some 30,000 years ago in Ice Age Europe. In Clash of The Cavemen, cinematic re-creations and state-of-the-art CGI bring to life the Neanderthals--stocky, powerful and able to tolerate intense pain--and their foes, the Cro-Magnons--weaker and more fragile but with a superior brain capable of complex thought. Watch the full documentary now (playlist - 1 hour. 36 minutes)

Strange Days on Planet Earth Around the globe, experts are racing to solve a series of mysteries: how could a one-degree rise in average temperature have profound effects around the globe? How could crumbling houses in New Orleans be linked to voracious creatures from southern China? Hosted by actor-writer-director Edward Norton, this award-winning series uses state-of-the-art graphics and globe-spanning investigations to understand how our environment is changing and why? More and more plants and animals are turning up where they don't belong. In Uganda it took only a few years for water hyacinth, not native to the area, to rapidly spread around Lake Victoria, choking the banks. Watch the full documentary now (playlist - 3 hours, 35 minutes)

What Difference Does It Make? This is a film about making music. It gets to the bottom of what is needed to be a musician and contemplates on some of the fundamental questions of life itself. It investigates the difficulties that a life in music can create. Shot by award-winning director Ralf Schmerberg, the film genuinely inquires many challenges, phases of progress and accomplishments that musicians experience. Everyone is a musician, everyone has an innate appreciation of music, it's our highest mathematics, it's our greatest language, and it's where the word ends. Each person has a different thing that influences them or inspires them. Stubbornness is an important part of being an artist. You have to be willing to be nobody to become somebody. Watch the full documentary now -