7 Ways Women and Girls Are Stereotyped, Sexualized, and Underrepresented on Screen 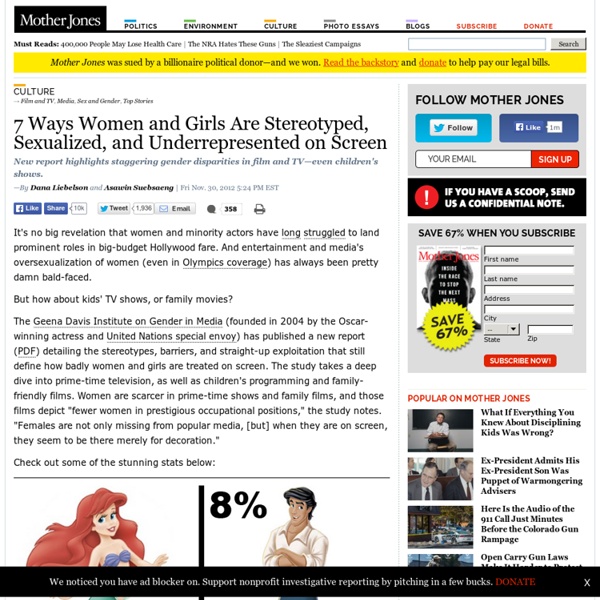 It's no big revelation that women and minority actors have long struggled to land prominent roles in big-budget Hollywood fare. And entertainment and media's oversexualization of women (even in Olympics coverage) has always been pretty damn bald-faced. But how about kids' TV shows, or family movies? The Geena Davis Institute on Gender in Media (founded in 2004 by the Oscar-winning actress and United Nations special envoy) has published a new report (PDF) detailing the stereotypes, barriers, and straight-up exploitation that still define how badly women and girls are treated on screen. The study takes a deep dive into prime-time television, as well as children's programming and family-friendly films. Women are scarcer in prime-time shows and family films, and those films depict "fewer women in prestigious occupational positions," the study notes. Check out some of the stunning stats below: Image credits: Walt Disney Pictures ; CBS ; HBO ; NBC ; Group W Productions ; 20th Century Fox ; TBS

Fear of Vulnerability and Geek Misogyny By Amanda MarcotteThursday, November 29, 2012 9:51 EDT Ta-Nehisi Coates has been reading Raymond Chandler, and finding the aggressive and frankly silly misogyny of it a bit hard to take at times. But we all benefit, since it gives him an opportunity to write about the relationship between misogyny and heterosexual male desire: I think to understand misogyny one has to grapple with the conflict between male mythology and male biology…..Masculinity’s central tenet is control—and perhaps most importantly, control of the body. In a lot of ways, it’s not that hard to understand. You do not get the girl. The way men deal with this disconnect is varied and fascinating. Some, however, spin off into misogyny. Misogyny is obviously more complex than this, but this is such an important part of it. But sadly, a lot of them buy into this notion that they are emasculated, and they turn to misogyny to “fix” this problem. I think a lot of these men really do think they’re oppressed. “Hey!

The Kissing Sailor, or “The Selective Blindness of Rape Culture” | Crates and Ribbons Most of us are familiar with this picture. Captured in Times Square on V-J Day, 1945, it has become one of the most iconic photographs of American history, symbolizing the jubilation and exuberance felt throughout the country at the end of World War II. For a long time, the identity of the pair remained a mystery. Have a look at some articles about it. Huffington Post Daily Mail CBS News A few facts have come to light. The articles even give us Greta’s own words: “It wasn’t my choice to be kissed. “I did not see him approaching, and before I knew it, I was in this vice grip. “You don’t forget this guy grabbing you.” “That man was very strong. It seems pretty clear, then, that what George had committed would be considered sexual assault by modern standards. In a way, I understand this. The unwillingness to recognize a problem here is not surprising, considering the rape culture in which we live. *Edited on 8/10 for clarity Like this: Like Loading...

Fiction: How To Date A Brown Girl (black girl, white girl, or halfie) Wait until your brother, your sisters, and your mother leave the apartment. You've already told them that you were feeling too sick to go to Union City to visit that tia who likes to squeeze your nuts. And even though your moms knew you weren't sick you stuck to your story until finally she said, Go ahead and stay, malcriado. Clear the government cheese from the refrigerator. The Best Birth Control In The World Is For Men By Jon Clinkenbeard. March 26, 2012, 11:25 AM CDT17.7K If I were going to describe the perfect contraceptive, it would go something like this: no babies, no latex, no daily pill to remember, no hormones to interfere with mood or sex drive, no negative health effects whatsoever, and 100 percent effectiveness. The procedure called RISUG in India (reversible inhibition of sperm under guidance) takes about 15 minutes with a doctor, is effective after about three days, and lasts for 10 or more years. The two common chemicals — styrene maleic anhydride and dimethyl sulfoxide — form a polymer that thickens over the next 72 hours, much like a pliable epoxy, but the purpose of these chemicals isn’t to harden and block the vas deferens. Easier than aiming magnets at your junk. With one little injection, this non-toxic jelly will sit there for 10+ years without you having to do anything else to not have babies. If this sounds awesome for you or your loved one, get the word out.

Men Who Blame Victim for Sexual Harassment Are Often Harassers | Sexual Harassment and the Workplace | Sex and Gender Men who blame women for being sexually harassed are more likely to be harassers themselves, a new study of college students finds. The findings are a confirmation of what social scientists had expected, said study researcher Colin Key, a psychologist at the University of Tennessee, Martin. But the results could help explain why some environments seem to foster sexual harassment, Key said. "There are some toxic work environments where males dominate, and there is a culture that lets them engage in this action and then get away with it," Key to LiveScience. Hopefully, this just adds to the knowledge that we need to target the whole system sometimes and not just these men." Key and his co-author Robert Ridge published the findings online April 1 in the Journal of Social and Personal Relationships. Harassers and victim-blamers Previous studies have shown that people with traditional views of gender roles are more likely to blame the victim in cases of sexual harassment. Self-protection Red flags

America’s Rape Problem: We Refuse to Admit That There Is One Share The same week that a leaked video out of Steubenville, Ohio showed high school boys joking and laughing about an unconscious teenager in the next room who had just been raped—“They raped her quicker than Mike Tyson!”—House Republicans let the Violence Against Women Act (VAWA) expire. They opposed an expanded version of the legislation that had increased protections for the LGBT community, immigrants and Native American women. This week we’ve also seen mass protests in India after a woman was brutally gang raped and died from her injuries. American media covering the Indian protests have repeatedly referenced the sexist culture, reporting how misogyny runs rampant in India. Like this article? It’s not just the parents of the accused rapists or the boys who made jokes who are complicit—it’s not just Steubenville, a town criticized for putting their prized high school football team above the law and justice for a young woman.

Ending Rape Illiteracy Share This week, a DC-based feminist group projected the phrase “rape is rape” onto the US Capitol building. The action was meant to highlight survivors’ stories and bring attention to the way rape is often mischaracterized. The sentiment may seem an obvious one—who doesn’t understand what rape is?—but the message, sadly, is much needed. Tuesday evening at the final Indiana Senate debate, Republican Richard Mourdock explained why he opposes abortion with no exceptions by calling pregnancy from rape "something that God intended"- the latest in a long line of "gaffes" by male politicians about sexual assault. Feminists have done a lot to change policies, but not enough to change minds. When Todd Akin uttered his now-famous line that women rarely get pregnant from “legitimate rape,” he didn’t misspeak. Rivard obviously thought this explanation would lessen the damage of his original statement; he assumed his belief that women regularly lie about being raped was a commonly held one.

A Woman's Worst Nightmare by Mary Dickson© 1996 "Lots of Men Are Glad One Woman is Gone," a recent newspaper headline announced. "Some men believe Stephanie Dawn Kirk is their worst nightmare come true," the article by a Salt Lake City writer began. I've been particularly curious lately about a man's worst nightmare. What had she done to strike terror in men? I don't mean to underplay men's fears or this woman's damaging accusations. Another story played in the local media the same week, a story that represented a lot of women's nightmares, though no reports described it as such. When we started working on our documentary film, we began keeping a file of clippings about the abuse women suffer at the hands of men -- a pregnant young woman shot by her boyfriend, a woman assaulted and run over by her attacker's car, a woman who had suffered a stroke bludgeoned to death by her husband, a young mother and her two-year-old daughter murdered by a spurned boyfriend, a seven-year-old sodomized by her father’s friend.