The 100 Best Films Of World Cinema 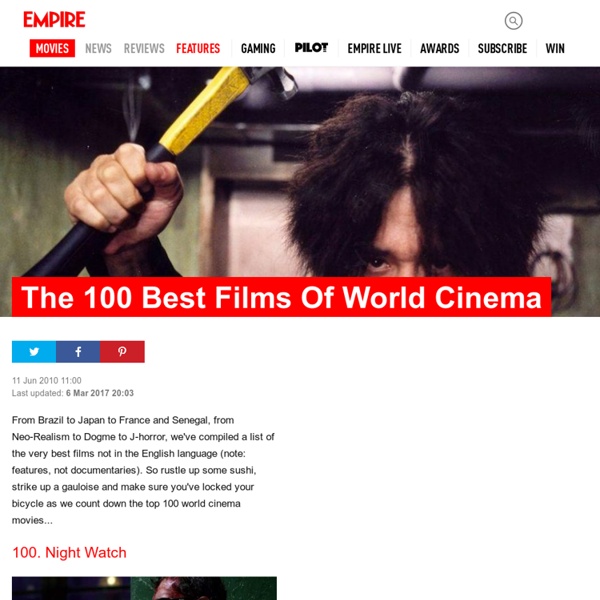 From Brazil to Japan to France and Senegal, from Neo-Realism to Dogme to J-horror, we've compiled a list of the very best films not in the English language (note: features, not documentaries). So rustle up some sushi, strike up a gauloise and make sure you've locked your bicycle as we count down the top 100 world cinema movies... 100. Night Watch Year: 2004Country: RussiaDirector: Timur Bekmambetov It's Buffy meets The Matrix meets Blade! Hollywood remake? Stream Night Watch now with Amazon Video 99. Year: 1993Country: ChinaDirector: Yuen Woo-ping It's the Robin Hood story transferred to the Ch'ing Dynasty, helmed by Yuen Woo-ping, the martial arts director that would go onto create such western fighting spectaculars such as Kill Bill and The Matrix Trilogy. Hollywood remake? Buy Iron Monkey now on Amazon 98. Year: 1985Country: JapanDirector: Akira Kurosawa Akira Kurosawa was almost blind when he directed his biggest movie, in 1989, and yet it's possibly his most beautiful. Hollywood remake?

Empire Features 10,000 Empire readers, 150 of Hollywood's finest and 50 key film critics voted in the most ambitious movie poll evert attempted. 500. Ocean's Eleven (2001) Director: Steven Soderbergh Slick, suave and cooler than a penguin's knackers, Soderbergh's starry update of the Rat Pack crime caper not only outshines its predecessor, but all the lights of The Strip combined.Read our Ocean's Eleven review 499.

Empire's 500 Greatest Movies Of All Time 10,000 Empire readers, 150 of Hollywood's finest and 50 key film critics voted in the most ambitious movie poll evert attempted. 500. Ocean's Eleven (2001) Best Movies (of All-Time) The best movies evoke tears, laughter, terror, reminiscence, and/or mystery in a truly personal way. Anything less (AKA, around 98% of all movies) serves no purpose other than to shove mindless, forgettable fodder in our face and line Hollywood’s pockets (Be afraid Michael Bay, be VERY afraid). This is that other, sacred 2%—the Holy Grail of cinema. Note: “Memorable Moments” may contain spoilers. 100. Pirates of the Caribbean: The Curse of the Black Pearl (2003)

25 Spectacular Movies You (Probably) Haven't Seen Pt. 2 Human Traffic Very unique comedy about the drug/club culture in the UK. Five friends ponder society, drug use and their own lives as they go about their usual weekend of snorting, smoking, popping, dancing and sex. The Matador The Fifty Greatest Cult Movies of All Time It’s midnight somewhere. “Cult movie” is a hard thing to pin down. For the purposes of this list — celebrating the tenth anniversary of Donnie Darko — we’ve put a premium on the intensity and selectiveness of a movie’s appeal. We’ve also limited each director to one film. See you at midnight!

Skip MegaVideo Time limit + New .COMs $7.99/yr plus 18 cents/yr ICANN fee. Discount based on new one-year registration prices as of 1/27/2012 with sale price reflected in your shopping cart at checkout. Discount applies to new registrations and renewals and cannot be used in conjunction with any other offer or promotion. The best films of the '00s The scene was not unlike 12 Angry Men (or, in this case, 3 Shlubby Men, 1 Exasperated Woman, And A Dude On Speaker Phone From Arkansas): Armed with lists of their favorite movies of the decade, the five core A.V. Club film writers spent days sequestered in a stuffy, un-air-conditioned room—okay, it was actually just a few hours, and we were comfortable—in an effort to forge consensus on the Top 50 films of the ’00s. The result: A ranked list that is in no way arbitrary and will serve as the canonical standard for decades to come. You’re welcome. 50. Oldboy (2003)

Top Ten Films 1930-2011 2015 1. MAD MAX: FURY ROAD (George Miller) 2. MY GOLDEN DAYS (Arnaud Desplechin) 3. CAROL (Todd Haynes) 4. SICARIO (Denis Villeneuve) 5. BLACKHAT (Michael Mann) 6. 12 Fun Facts about The Movie "Groundhog Day" Welcome to my post! Here are 12 Things You Probably Didn’t Know About The Movie "Groundhog Day." I love this movie and I loved finding out the interesting things that happened behind the scenes! Not to mention Bill Murray is a comical genius! I hope you enjoy it 1.

Top 100 Tuesday: 100 Best Movies of the Decade EmailEmail We are leaving Kubrick behind and fast approaching Hyams. If you get that reference, go grab yourself a cookie. It is time for us to reflect back on the decade that was. On January 1st, 2000, Disney released FANTASIA 2000. Martin Scorsese's Film School: The 85 Films You Need To See To Know Anything About Film Interviewing Martin Scorsese is like taking a master class in film. Fast Company’s four-hour interview with the director for the December-January cover story was ostensibly about his career, and how he had been able to stay so creative through years of battling studios. But the Hugo director punctuated everything he said with references to movies: 85 of them, in fact, all listed below.

Fantastic Celebrity Caricature Illustrations - StumbleUpon Fantastic Celebrity Caricature Illustrations Caricatures : A caricature can refer to a portrait that exaggerates or distorts the essence of a person or thing to create an easily identifiable visual likeness. In literature, a caricature is a description of a person using exaggeration of some characteristics and oversimplification of others. (Wikipedia) Caricatures are always funny, they get even better when they are of our favourite celebrities. Killer Movie Posters That You Must See I stumbled upon this site by accident and I just had to promote the artist. His name is Justin Reed, based in Vermont and he’s a wicked Illustrator whose created quite a collection of killer illustrations of classic films. According to the site there will be upcoming opportunity to get your hands on a few original illustrations which were commissioned for a group show at the APW Gallery in New York.