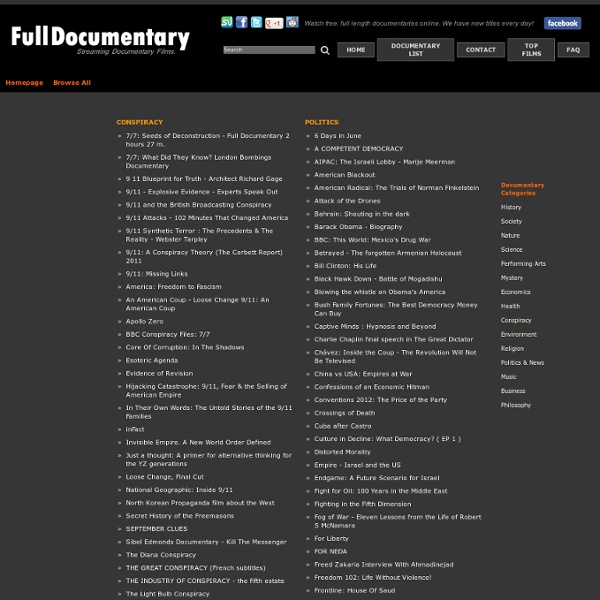 9 Places Where Electronics Engineers Can Find Free Useful Tutorials 1. The Learning Pit Here you will find a number of tutorials on PLC and Software Simulators, Tutorials in Electric Circuits, Electricity Basics and other tools. Must Watch Documentaries About The U.S. Real Scientific Evidence of Controlled Implosion "The preconceived notion of NIST is that there's no evidence for explosives, as in there is no point in looking. That is the most unscientific thing which you can possibly think of.

Selected VOA Special English TV Videos The newer videos are near the top of each category. To see all the videos, go to VOA Special English TV Videos. Architecture Designing a Quake-Resistant Building Starts at the Soil Computers 10 Books You ABSOLUTELY MUST READ If You Are Tired Of Being Broke (No Self-Help Rah-Rah Bullshit) 1. Buffettology: The Proven Techniques for Investing Successfully in Changing Markets That Have Made Warren Buffett the World's Most Famous Investor I NEVER buy books on stock market. And neither should you.

Essays by Nicole Terry By: Nicole Terry PH: 717-497-5231 Email: Nicole@Boxemail.com The documents listed below, plus hundreds more and numerous Essays explaining what has happened to this World are available on Disks for FREE. THE BRAIN FROM TOP TO BOTTOM Sexual reproduction in human beings is made possible by the fusion of two reproductive cells, or “gametes”—the ovum from the mother and the sperm cell from the father. This fusion results in the formation of a zygote with 46 chromosomes: half from the mother and half from the father. The zygote thus acquires a unique genetic identity, so that it is far more accurate to speak of the sex act as one of procreation (the creation of a new being) rather than one of reproduction, which would imply simply producing the same thing over again. One day after fertilization, the zygote begins a series of mitotic divisions in which the considerable volume of cytoplasm from the ovum is divided among the multiple daughter cells. Hence, during these first cell divisions, the zygote, now called an embryo, does not grow in size but does move successively through the stages where it is composed of 2, 4, 8, and then 16 cells, called blastomeres.

ARKive - Discover the world's most endangered species Wildscreen's Arkive project was launched in 2003 and grew to become the world's biggest encyclopaedia of life on Earth. With the help of over 7,000 of the world’s best wildlife filmmakers and photographers, conservationists and scientists, Arkive.org featured multi-media fact-files for more than 16,000 endangered species. Freely accessible to everyone, over half a million people every month, from over 200 countries, used Arkive to learn and discover the wonders of the natural world. Since 2013 Wildscreen was unable to raise sufficient funds from trusts, foundations, corporates and individual donors to support the year-round costs of keeping Arkive online. Therefore, the charity had been using its reserves to keep the project online and was unable to fund any dedicated staff to maintain Arkive, let alone future-proof it, for over half a decade.