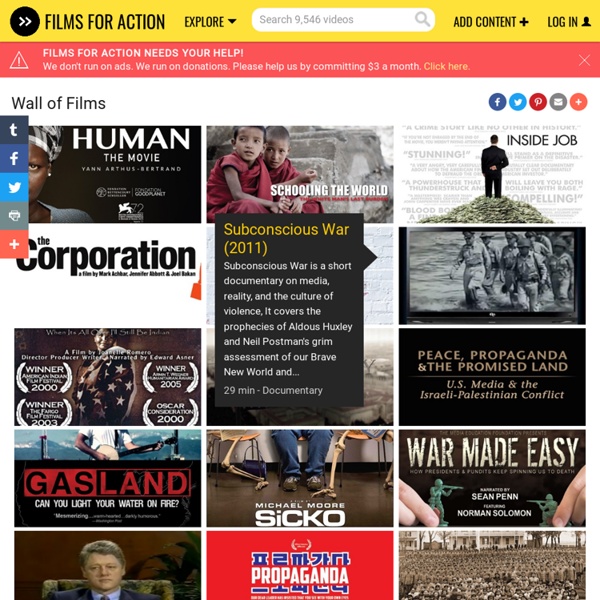 Just imagine what could become possible if an entire city had seen just one of the documentaries above. Just imagine what would be possible if everyone in the country was aware of how unhealthy the mainstream media was for our future and started turning to independent sources in droves. Creating a better world really does start with an informed citizenry, and there's lots of subject matter to cover. From all the documentaries above, it's evident that our society needs a new story to belong to. The old story of empire and dominion over the earth has to be looked at in the full light of day - all of our ambient cultural stories and values that we take for granted and which remain invisible must become visible. But most of all, we need to see the promise of the alternatives - we need to be able to imagine new exciting ways that people could live, better than anything that the old paradigm could ever dream of providing. So take this library of films and use it.

1980's: How to Get the Look - PrivateIslandParty.com by Emily Neelandposted on 1/18/13 Heading to an 80′s party or just looking to infuse your wardrobe with inspirations from wild 80′s fashions? Then you’re probably also looking for some 80′s makeup, hair and style tips to stay one step ahead of the other Breakfast Club wannabes! The 80′s was a new dawn filled with neon rays of light. Everything was bigger, brighter, and in-your-face-er. Some people think pulling off the 80’s look is easy, but if you follow our advice, you will outshine these simpletons and expose them for the fraudulent fashionistas they are. Hair 80’s hair relied heavily on hairspray, mousse and gels. Makeup Makeup in the 1980’s was a form of art! Step One: Apply liquid foundation and concealer and set it with a translucent loose powder. Step Two: Use blush and bronzer. Step Three: Apply highlighter. Step Four: Use strong accents on the eyes. Step Six: Play with glitters, but don’t go overboard. Step Eight: Finish off your look with some bright pink or purple lipstick.

Comedy Central Launches Stand Up App So You Can Watch All Your Favorite Comedians And Discover New Ones Comedy Central has released a standalone app for watching and discovering awesome stand-up comedians. The app, called CC:Standup, has more than 6,000 videos from 700 comedians. That will allow stand-up fans not just to find hilarious clips from their favorite comedians, but to find others that they might not have known about. The app takes advantage of a huge library of stand-up content that Comedy Central has stored in its vaults. Ben Hurst, VP of Mobile and Emerging Platforms at Comedy Central, told me that the app is just one way that Comedy Central is trying to expand its brand and engage with millennials. When you first open the app, you’re greeted with a curated playlist of standup material. To that end, the app has a search page that will let you search for individual comedians and let you just watch all their content. Anyway, the best part of the app is that it’s free.

skin tones for painting C olor mixing is one of the most difficult aspects of painting. Back in Holbein's day it wasn't too difficult simply because there were so few colors from which to chose. Today's huge spectrum of colors makes choosing colors difficult. Should I choose a red that stays warm when mixed with white or should I choose one that becomes cool when mixed with white? Confusing? Caucasian flesh tones are composed of yellows and reds with greys added to neutralize certain areas. The head can be divided into three areas: forehead, cheeks and jaw. The ears, cheeks and nose (as well as the mouth) have an ample blood supply that makes them red. The area under the nose - the jaw, has the most neutral color. The neck should be slightly neutralized. The accompanying illustrations were done to show those tonal transitions, thus all of the transitions are more obvious than they should be. The following illustrations were sketched out in gouache rather than oils but the same principles apply.

Top 10 Shocking Documentaries Movies and TV As a visual medium, documentaries frequently succeed in portraying the unimaginable far better then any book alone could do. Beaming everything from the consequences of child abuse to the horrors of nuclear warfare into the homes of millions, the following infamous documentaries shock the viewer and challenge perceptions. High on Crack Street Following the struggle of three crack addicts, ‘High on Crack Street’ digs deep into the complex daily lives of individuals striving to obtain their next fix. Aokigahara / Suicide Forest Lying at the base of Mount Fuji, Aokigahara Forest has a rather unsettling reputation as a suicide hotspot . Vicious, ruthless, remorseless, brutal, fearless, violent, disturbed and callous are just some of the words which can be used to describe serial contract killer Richard “The Iceman” Kuklinski. Nuit et Brouillard The Killing of America Interview with a Cannibal What drives a man to kill and cannibalize an innocent woman? Bulgaria’s Abandoned Children