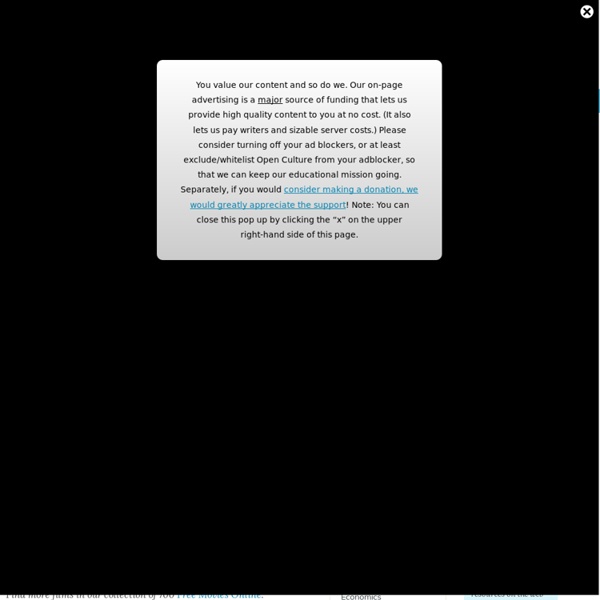 How about some hors d'oeuvres meant to accompany the main course, the 2014 Academy Awards? We scouted around the web and found 36 Oscar-winning (or nominated) films from previous years. The list includes many short films, but also some long ones, like Sergei Bondarchuk's epic version of War & Peace. Sit back, enjoy, and let us know if we're missing any other Oscar winners... Find more films in our collection of 700 Free Movies Online. A Herb Alpert & the Tijuana Brass Double Feature - Free - A precursor to modern music videos, this Oscar-winning animated film by John & Faith Hubley is set to the music of two popular songs recorded by Herb Alpert. (1966)A Story of Healing - Free – Won Academy Award for best Documentary Short Subject. Related Content: 200 Free Documentaries Online 21 Free Hitchcock Movies Online Tarkovsky Films Now Free Online The 10 Greatest Films of All Time According to 846 Film Critics

A teacher speaks out: 'I'm effectively being forced out of a career that I wanted to love' - Schools - Education - The Independent It's hard to be a good teacher. It means planning weeks' worth of lessons in detail. It means covering the needs of every student, whether they're dyslexic, or don't speak English as their first language, or are high achievers and so on. Being a good teacher means uncovering themes which will engage kids, trawling websites and libraries for films and texts as stimuli. It entails writing four different intentionally-flawed versions of a suspenseful story for them to modify in their first lesson, and five different tiers of riddles about 3D shapes for them to tackle in the second, all before 8am. It means using outdated software to create worksheets with seven different cartoon characters to motivate students with severe learning difficulties, and spending break times enlarging these for students with visual impairments. It means composing science songs to the tune of The Gap Band's "Oops Upside Your Head" at nine in the evening. Regrettably, it's not so simple. The workload is un-audited.

The unexpected math behind Van Gogh's "Starry Night" - Natalya St. Clair | TED-Ed A few lesson plans exist for teaching visual arts and self-similarity (objects that have the same pattern) that could be used after showing this lesson. Shodor has some free lesson plans for students in grades 4 through 8. High school students can learn recursion algorithms to create the Koch curve using Scratch for free. Educational technologist Dylan Ryder has also written about creating fractals. A beautiful app worth checking out is Starry Night Interactive App by media artist Petros Vrellis. Download it to your tablet and create your own version of Starry Night. Really interested in mathematics? Turbulence, unlike painting, is mostly a time-dependent phenomenon, and after some time, breaks statistical self-similarity that Kolmogorov predicted in the 1960s. In fluid mechanics, since we can't often solve the equation for flow patterns, we develop a system of scaling between the physical properties. AcknowledgementsNatalya St.

46 Hidden Tips and Tricks to Use Google Search Like a Boss | Red Website Design Blog How often do you use Google to find something on the internet? If like a lot of people you use Google every day you’ll be astounded by the number of hidden tips and tricks their search facility offers. 46 of them are featured in this infographic from Who Is Hosting This, how many of those did you know about? Related The 10 Most Viewed and Shared Posts from Our Blog in 2014 2014 has been a fantastic year for Red Website Design, we’ve grown from a one man band at the start of the year to having 5 full time members of staff (and more on the way). In "Content Marketing" 13 Google Search Tricks That Will Make Your Life Much Easier Do you struggle to find the information you need on Google? In "Infographics" 5 Killer Secrets to Instantly Increase Engagement on Google Plus If like a lot of other small business owners you see Google Plus as just another social network and a waste of time you could be missing a trick.

Your Journey Begins - DNA Ancestry Project Participation is simple. Begin by ordering a public Participation Kit. Your kit will arrive in the mail and contains four swabs. Simply use the swabs to rub inside of your cheek for 30 seconds, and mail them back to the laboratory using the pre-addressed return envelope provided in the kit. Once you receive your results, your genetic journey begins.

BBC Blogs - The Radio 4 Blog - Philosophy Animated A History of Ideas: Animated Videos Explain Theories of Simone de Beauvoir, Edmund Burke & Other Philosophers The UK’s Open University has become a dependable source of very short, online video introductions to all sorts of things, from weighty subjects like religion, economics, and literary theory to lighter, but no less interesting fare like the art and science of bike design. With breezy tone and serious intent, their animated “60-Second Adventures” make seemingly arcane academic ideas accessible to laypeople with no prior background. Now they’ve teamed up with writer and BBC broadcaster Melvyn Bragg of In Our Time fame for a series of video shorts that run just a little over 60 seconds each, with animations by Andrew Park of Cogni+ive, and narration by comedic actor Harry Shearer from Spinal Tap, The Simpsons, and, most recently, Nixon’s the One. Drawn from Bragg’s BBC 4 radio program “A History of Ideas,” the shorts introduce exactly that—each one a précis of a longstanding philosophical problem like Free Will vs. Determinism (top) or the Problem of Evil (above). Related Content: