10 embarrassing “Before They Were Famous” commercials 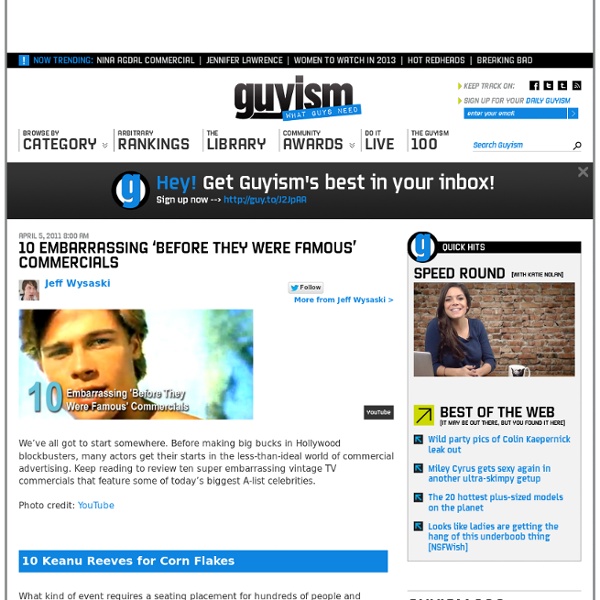 25 Really Creative Floor Sticker Ads Jun 18, 2012 Below you will find a collection of creative, provocative and sometimes funny floor sticker ads that caught our eye. It’s fascinating to see the ideas ad agencies can come up with when they are not constrained by the restrictive borders of a magazine or billboard. If you know of any other really creative sidewalk, elevator or floor ads that we missed, please let us know in the comments! If there’s enough maybe a follow-up post will be in order :) If you enjoyed this post, the Sifter highly recommends: The 20 Best Cartoons Of The 90's The 90's were a golden age of cartoons. We had a blast putting together the 20 best, and we're sure this list will inspire some discussion. Our only criteria was that the cartoon had to start in the 90's, meaning a couple of very late in the decade entries were still eligible. We did make a small exception for one show, but we think you'll agree it was warranted. Enjoy! 20. Production Period: 1991-1995 This Disney smash followed Drake Ballard and his alter-ego, Darkwing Duck. 19. Production Period: 1991-1994, later 1996-1999 Doug Funnie and his best friend Skeeter got into all kind of adventures in the fictional town of Bluffington. 18. Production Period: 1990-1994 Using characters adapted from the 1967 movie, The Jungle Book, Talespin was set in the town of Cape Suzette. 17. Production Period: 1993-1996 Rocko's Modern life followed the life of wallaby Rocko. 16. Production Period: 1995-1999 15. Production Period: 1994-1995 14. Production Period: 1990-1995 13. Production Period: 1990-1998 12.

Top 8 Most Overused Horror Cliches in Movies Throughout film history certain conventions and themes are constantly reused no matter the time or place. The one genre that’s stayed consistent with the same formula throughout the years is horror. It doesn’t matter if it’s 1965 or 2007, the same stuff pops up in everything. The virgin girl will always prevail, while her slutty friend gets killed. There will never be cell phone reception when you need it, and somebody will always forget to lock the door behind them. Take a look at some of the top 8 most overused horror cliche’s of all time… 8. Perhaps I should clarify this by saying the female virgin never dies in horror movies. 7. Why don’t people lock their doors? 6. In the more suspense driven horror films and thrillers the bad guys are a lot more articulate than Jason Voorhies or Michael Myers. 5. Have you ever watched someone get stabbed or knocked the f*ck out in a movie, only to have them regain consciousness and disappear within a matter of seconds? 4. 3. 2. 1.

Top 10 British Comedy Series Movies and TV Some of the best comedy around has been British Comedy. The classic one liners, the funny stories and the bizarre slapstick. This list will not just be my opinion, although a few personal favorites will pop up. Starting from the very early moments of comedy, to some newer moments, here are the top 10 British comedy series. I think I will start this list with one of the most recent series. One of the first series that I know to have adopted the Point of View camera style. A program with very little dialogue, yet full of physical humor. Monty Python’s Flying Circus Possibly one of the most influential television series of all time, spanning four hilarious films and the only sketch show on my list. Probably the most known series on this list, and it is no surprise why. The Royle Family is one of the only programs in which nothing really happens. The perfect example of typical life in later teenage years. That’s right, The Office is the greatest British comedy of all time.

Andy Anderson (@socialtisers) sur Twitter Twitter Dominates Day 2 of Cannes Lions [INFOGRAPHIC] The world's premier brand communications conference, Cannes Lions International Festival of Creativity, is well underway at its dazzling seaside location in the south of France. Perhaps due to the city's romantic charm, festival attendees have been checking in to the beach on Foursquare and documenting their morning croissants on Pinterest. But most of the Cannes Lions chatter is happening on Twitter. SEE ALSO: Cannes Lions: Ideas, People and Companies With Big Buzz Based on this infographic created by SapientNitro, the event has earned more than 56,000 Twitter mentions in its first three days. Check out Cannes Lions' list of award winners thus far, and follow Cannes Lions online as more winners are announced. Thumbnail image courtesy of Flickr, Tambako the Jaguar

A New Business Pitch: Put The Bubbly On Ice, This One Is A Win!! By Ernie Arias Of all activities, New Business pitches are the most exhausting, demanding and strenuous projects in any advertising studio. They can also be the most satisfying and rewarding, especially when the 'cherry on top' is a big WIN. It feels as if you're putting your hands on the most coveted of all trophies after a fierce and long competition. What a win Represents Winning a new account or getting more business out of an existing client, it's essentially what our business is about. Team effort and studio's role You can certainly compare a new business pitch with a competition because that's exactly what it is. Let's use this analogy from ancient times to represent the studio roles: Hunters would go out into the wild for days and come back to 'put the meat on the table.' Don't you want to be part of this? So after knowing all of these interesting facts, don't you want to be part of the team working on the next new business pitch?

Top 10 Apple Commercials of All Time (Updated) - The Cody Word Be sure to check out my brand new report, “Ten Tech Stocks for the Next Ten Years”, at 10Stocksfor10Years.com for $10. This site is not affiliated with MarketWatch. With Steve Jobs’ passing, I first want to extend prayers and condolences to his family and loved ones. I also wanted to pause for a moment to reflect on some of his and his greatest company’s greatest hits. I often tell people in an interview when they ask me about Apple and how I bought it at and told my subscribers to buy it at $7 back in March 20003 that without that call, I’m not sure I’d even be in the studio with them. Two other notes about Steve Jobs that came into my mind as I reflected upon him and my relationship with him as such a long-term investor in Apple. Like most analysts I’m reading, this sad ending to the stewardship and chairmanship of Steve Jobs at Apple doesn’t change my overall stance or bullishness for the stock. And without further ado, here’s the Top 10 Best Apple Commercials of All Time.