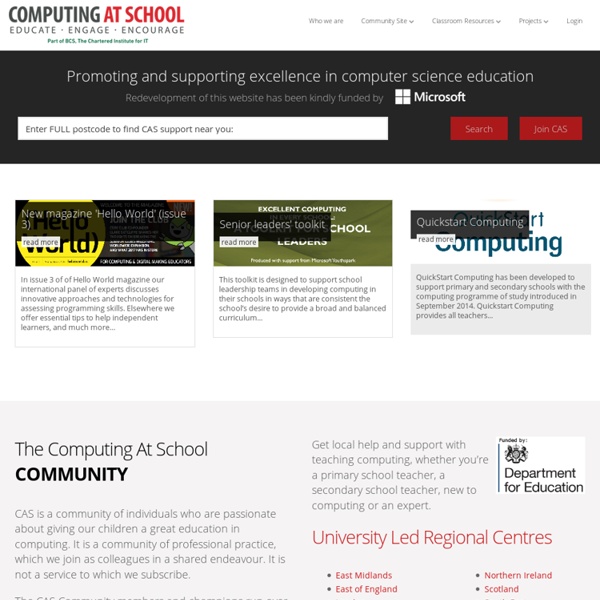 Sunbury Hub Leader speaks about CAS https://www.youtube.com/user/educationgovuk Latest news from the NoE With support from the DfE CAS are implementing a programme of locally driven support for teachers: 'The Network of Excellence for the Teaching of Computer Science' (NoE). Get the latest news about the NoE here Latest News

SQLZOO Learn SQL using: SQL Server, Oracle, MySQL, DB2, and PostgreSQL. Reference: how to... How to read the data from a database. 2 CREATE and DROP Demographics of Technology Users The Demographics of Technology Users The face of technology users continues to change. According to the Pew Internet & American Life study, "a greater portion of enthusiastic tech users find it more difficult to do without their computer, cell phone and internet than their television and landline telephone". Thirty one percent of the population are considered heavy technology users. Many of this "tech elite" access the internet wirelessly and pay for online content. Computer Science Across the Curriculum - Computer Science Teacher - Thoughts and Information from Alfred Thompson Yesterday I had the pleasure of meeting with Seung Yu, the principal of the new Academy for Software Engineering, a new software/computer science focused school opening in New York City this fall. We had a great discussion about the school, its goals and how Microsoft might work with them. It’s an exciting idea – a school like this.

Project Spark Allows Players to Create Any World They Want When there are no limits, what will you create? The Electronic Entertainment Expo (E3 for short) is an annual event where developers showcase their latest electronic and gaming projects. Each year this event announces new video game consoles, games, and other media that are deserving of the big stage.

From the H-Blocks to Robben Island Hunger Striker Laurence McKeown’s play 'Those You Pass on the Street' moved people to tears during the National Arts Festival in South Africa AN GLÓR GAFA/The Captive Voice, the magazine written entirely by republican prisoners, was formally established in the H-Blocks of Long Kesh in 1989. It was compiled and edited within the H-Blocks but was contributed to by republican prisoners wherever they were held: Armagh Women’s Prison, Portlaoise, prisons in England, Europe, and the United States. In the early years all the material for publication had to be smuggled into the prison, the edition compiled and edited, then smuggled out of the prison where Sinn Féin’s POW Department passed it on to An Phoblacht for printing. In later years we were able to produce the magazine openly through the prison authorities. Five thousand copies of each edition were printed and over the next ten years there was a total of 26 editions.

App Inventor Get Started Follow these simple directions to build your first app! Tutorials Step-by-step guides show you how to create even more apps. Kickstarter of the Week: Wire Up Your Doll House You, too, can make your own tiny flickering television. Bettina Chen, Alice Brooks, and Jennifer Kessler all studied math and science in school. But year after year, they noticed a problem. “As we got to higher levels of study, the number of women in our classes continued to decrease,” says Books. She’s not wrong. 27 Tips For Effective Classroom Management Getting students to pay attention, let alone actually learn something, is a challenge. It takes grit, determination, creativity, and a close eye. Teachers, in-classroom parents, assistants, and administrators need to be as up to speed as possible in order to be effective.

Organize Your Thoughts and Tasks With Thought Boxes Thought Boxes is a task management service with a hint of mind mapping in its user interface. At its most basic Thought Boxes is a place to create to-do lists. You can organize your to-do lists into groups that Thought Boxes refers to as "trains" as in "trains of thought." Your lists can include basic text notes as well as links to other sites. How to embed QR codes in to pictures Published on May 19th, 2013 | by Mark Anderson I’ve long sung the praises of using QR codes as a vehicle to support learning with these two posts being two such examples: …and I’m not the only person either: There are lots of places online that you can use to create your own QR codes for free too. The simple Kaywa site is one of the most popular and certainly ranks most highly on Google.

7 Ways to make IT real: #5 Be realistic - ICT in Education - Educational Technology One sure-fire way to turn pupils off computing and ICT is to set tasks that are either unrealistic in themselves, or contain unrealistic elements. As an example of the former, I once came across an activity in which you selected your nail varnish colour from a database. Now, I’m not a girl, so I don’t really know about these things, but all I can say is that I have known lots of females and, as far as I know, none of them uses a database to figure out what colour nails to have. Now, I will concede that in certain circumstances, a database may well be necessary. I imagine celebrity pop stars who have hundreds of outfits could need one, and a shop specialising in make-up would use one. But I can’t see that being within the normal day-to-day experience of most girls.