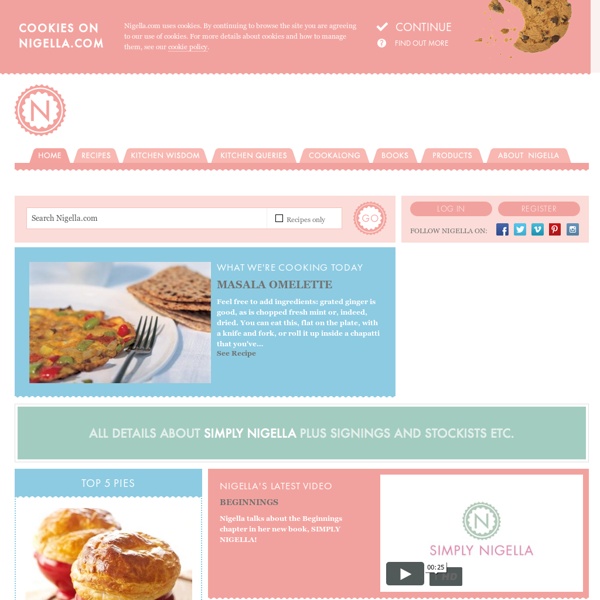 SALT AND PEPPER SQUID This is unexpectedly easy to shop for as well as easy to cook. Baby squid (better here than tougher, grown-up, windsock-sized ones) can be found, frozen, in 500g boxes, to be stashed in your freezer and thawed as needed. And while any recipe that involves a pestle and mortar can seem like too much kitchen faffing when you get back from work, let me tell you that a bit of murderous bashing can be a great stress-relieving exercise. But if you're not convinced (and believe me I understand: until recently I had only to read the words 'pestle and mortar' to be filled with dread and intimidation) you can always use one of those little electric coffee-bean or spice grinders for blitzing the salt and pepper.

THIS IS A COOKBOOK I am not, as a rule, much drawn to the sort of cookbook that has kooky drawings and an "as if written by hand" graphic style. But there are always exceptions, and this is one of them, simply because of the sheer number of must-cook recipes in it. Not only that, this book seems fired by genuine crusading enthusiasm and too many good ideas to be anything other than celebrated.I almost chose the Grilled Meatball Sandwich for you today (and Korean-Style Short Ribs also nearly made it) but in the end I just could not be deflected from the Linguine with Anchovies, Parsley and Walnuts. Linguine With Anchovies, Parsley, and Walnuts From This Is A Cookbook: Recipes For Real Life by Max Sussman and Eli Sussman. Published by Olive Press, 2014.

SLOW ROASTED GARLIC AND LEMON CHICKEN This is one of those recipes you just can't make once: that's to say, after the first time, you're hooked. It is gloriously easy: you just put everything in the roasting dish and leave it to cook in the oven, pervading the house, at any time of year, with the summer scent of lemon and thyme - and of course, mellow, almost honeyed garlic. I got the idea of it from those long-cooked French chicken casseroles with whole garlic cloves and just wanted to spritz it up with lemon for summer. The wonderful thing about it is that you turn the lemon from being a flavouring to being a major player; left in chunks to cook slowly in the oven they seem almost to caramelise and you can eat them, skin, pith and all, their sour bitterness sweetened in the heat.

Pumpkin Mantou （金瓜馒头） Yesterday was my first time making mantou (馒头） or chinese buns. I was doubting whether I should post such a ugly picture. Well, the purpose of this blog is not just to showcase how "well" I can cook or bake (note the inverted commas), it serves also to present some of my failures. TUNA AND CRAB AND AVOCADO WRAPS I have never really thought of myself as a person who could wrap, fold or fiddle about with food or felt that way inclined. But you know, when you get into it, it's really quite OK - actually, more than OK. These wraps are curiously relaxing to assemble and everyone is always bowled over by them. They're a very good way of injecting a little zing into the proceedings without having to slave for hours over a hot hob.

QUICK CALABRIAN LASAGNE I do realize that a dish that needs an hour in the oven, might not, at first glance, seem to qualify for the epithet "quick", but I'm not trying to pull a fast one. All things are relative, and what makes this recipe feel so speedy is that there is no white sauce - with its roux and patient stirring - involved, the meat sauce takes around 5 minutes, and the lasagne sheets are used straight from the packet (no pre-boiling) and cook in the exaggeratedly liquid meat and tomato sauce. The recipe comes courtesy of an Italian informant from Calabria, where sliced cooked ham and hard-boiled eggs are part of the local lasagne. Should you wish to provide a vegetarian version, boost the number of hard-boiled eggs to 6, the mozzarella balls to 4 and dispense with the meat, stirring a couple of canfuls of chopped tomatoes into the passata instead.

Food: Nigella Lawson's cauliflower, garlic and turmeric soup  By The Royal Marsden Cancer Cookbook Published: 00:03 GMT, 8 February 2015 | Updated: 00:03 GMT, 8 February 2015 Nigella Lawson’s ‘Packed full of vegetables and phytonutrients, it is undeniably true that this soup is both soothing and bolstering as well as easy and gratifying to eat. Baking the garlic gives a lot of depth while taking away any potential for bitter heat; strangely, the turmeric seems to assuage, if not remove, the school corridors smell of the cooking cauliflower. And the colour, an almost acid gold, is glorious.’

Pumpkin Mantou The mantou looks blur, but the background is clear. That's my phone. See how my current town, Kuala Kangsar looks like. That clock tower is the major landmark in town. SPAGHETTI WITH MARMITE I came across this recipe in Anna Del Conte's memoirs, Risotto with Nettles. Now, there are so many recipes I could borrow from her, and many I have, but this is the one I have to show you here. She introduces it as hardly a recipe, but I wanted to include it because I haven't as yet found a child who doesn't like it. I know the combination of pasta and Marmite sounds odd to the point of unfeasibility, but wait a moment, there is a traditional day-after-the-roast pasta dish, in which spaghetti is tossed in stock, and I have eaten shortcut versions of this in Italy (recreated guiltlessly in my own kitchen) which use a crumbled stock cube, along with some butter, olive oil, chopped rosemary and a little of the pasta cooking water to make a flavoursome sauce for spaghetti. If you think about it, Marmite offers saltiness and savouriness the way a stock cube might. I'm glad this recipe is here, and I thank Anna for it.