Teaching kids how to code 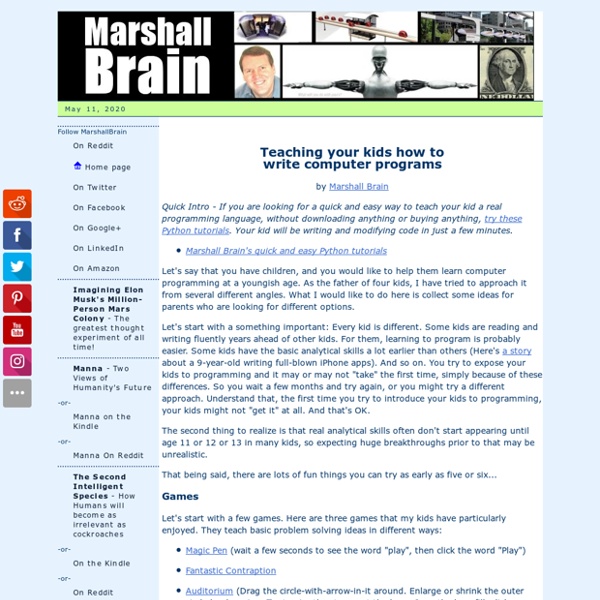 by Marshall Brain Quick Intro - If you are looking for a quick and easy way to teach your kid a real programming language, without downloading anything or buying anything, try these Python tutorials. Your kid will be writing and modifying code in just a few minutes. Marshall Brain's quick and easy Python tutorials Let's say that you have children, and you would like to help them learn computer programming at a youngish age. As the father of four kids, I have tried to approach it from several different angles. Let's start with a something important: Every kid is different. The second thing to realize is that real analytical skills often don't start appearing until age 11 or 12 or 13 in many kids, so expecting huge breakthroughs prior to that may be unrealistic. That being said, there are lots of fun things you can try as early as five or six... Games Let's start with a few games. Then there is this game, which actually does a very good job of teaching simple programming skills: Python for Kids

Kodu Kodu is a new visual programming language made specifically for creating games. It is designed to be accessible for children and enjoyable for anyone. The programming environment runs on the Xbox, allowing rapid design iteration using only a game controller for input. Programming as a Creative Medium The core of the Kodu project is the programming user interface. The language is simple and entirely icon-based. KidsRuby 1.0 Released So, you have a son or daughter who is showing some interest in computer programming, but you're not really sure where to start. What to do? Well, as a former high-school computer science teacher, I am here to strongly recommend that you start them off with a scripting language like Ruby or Python. CoderDojo : pleins de defis autour de la programmation CoderDojo, fundamentally is non-curriculum based. There is a multitude of excellent resources online for learning computer programming and we encourage all Dojos to use these in order to teach the basics and then focus the Dojo sessions on allowing the young people or 'CoderDojo Ninjas' to work creatively on projects of their own. Learn more information about the Guiding Principles and Philosophies of learning at CoderDojo. Topics covered at a Dojo is dependant on the Mentors who organised the Dojo and their technical skills combined with the interests of the young people attending. The focus is on guiding the young people with the basics and then facilitating them in creating their own, self led, projects.

Download Sandbox Want to keep updated with new releases of D.’s Sandbox and Platinum Arts Sandbox Free 3D Game Maker? Old Releases are available here! IMPORTANT NOTE TO EDUCATORS: As per the license, if you are using Sandbox in schools please e-mail me! We’d also really like you to post your experiences here if possible. 5 Ways to Start Learning How to Code Right Now Learning to code is one of the most powerful and satisfying things you can ever do. If you’re a designer, learning to code can help you understand what you’re creating for, and if you’re looking to build a startup from scratch, being a technical founder can make things exponentially easier for you. No matter why you want to learn, the only thing you really need is curiosity. But if you’re just starting out as a novice and don’t know where to begin, there are plenty of ways to get started. We presented this list of 7 ways to start learning how to code right now for free last month, and now we’re back with 5 more ways to start coding for free! iTunes U

KidsRuby Teaches Your Children How to Program You’ve got to start them young, right? With kids picking up on how to use a computer faster than ever before, why not teach them how to program too? Kids Ruby is a piece of software and set of tutorials that teaches kids the art of development, with Ruby as its programming language of choice. Forget science fairs, your son or daughter could be the next Mark Zuckerberg. Why all our kids should be taught how to code A vigorous debate has begun – within government and elsewhere – about what should be done about information and communication technology (ICT) in the school curriculum. Various bodies – the Royal Society, the Association for Learning Technology, Computing at School (a grassroots organisation of concerned teachers) and the British Computer Society, to name just four – have published reports and discussion documents aimed at ministers and the Department for Education. Michael Gove, the education secretary, made an enigmatic speech at the recent BETT technology conference indicating that a rethink is under way in the bowels of Whitehall. Meanwhile, in another part of the forest, there are some astonishing developments happening – such as the fact that more than a million people have already placed orders for Raspberry Pi, the cheap, credit-card-sized computer developed by Cambridge geeks, which began shipping last week. What's missing from all this is a big vision. Is that what we want?

Learn to Code with Harvard's Intro to Computer Science Course And Other Free Tech Classes I’ll confess, when it comes to computers, I’m pretty much strictly a user. And these days, with the potential freedom and creatively afforded by open access software, the endless hacks for virtually everything, and the availability of free online computer classes, that seems like kind of a lame admission. So I’m tempted to rectify my programming ignorance by pushing through what promises to be a rigorous intro to computer science, CS50, Harvard’s introductory course for both majors and non-majors alike. The course offers a broad knowledge base to build on, as you can see from the description below: Topics include abstraction, algorithms, encapsulation, data structures, databases, memory management, security, software development, virtualization, and websites. Languages include C, PHP, and JavaScript plus SQL, CSS, and HTML.

Code Club Code Club is a programme run by the Raspberry Pi Foundation. We are part of a growing worldwide movement that is working to put the power of computing and digital making into the hands of people all over the world. We work with a global community of volunteers, educators, and partners who run free Code Clubs where 9- to 13-year-olds build and share their ideas. There are currently over 13000 clubs in more than 160 countries, supporting over 180000 young people learning to code each week.