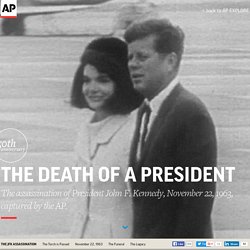 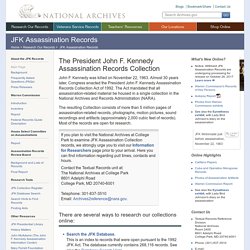 Kennedy was killed on November 22, 1963. Almost 30 years later, Congress enacted the President John F. Kennedy Assassination Records Collection Act of 1992. The Act mandated that all assassination-related material be housed in a single collection in the National Archives and Records Administration (NARA). The resulting Collection consists of more than 5 million pages of assassination-related records, photographs, motion pictures, sound recordings and artifacts (approximately 2,000 cubic feet of records). If you plan to visit the National Archives at College Park to examine JFK Assassination Collection records, we strongly urge you to visit our Information for Researchers page prior to your arrival. John f kennedy assassination - Google Scholar.

JFK assassination: Top ten conspiracy theories over the death of popular American President. The assassination of John F Kennedy was one of the world's most shocking moments. 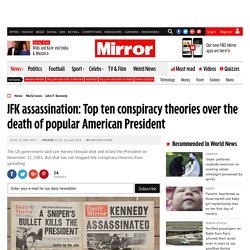 The US government said Lee Harvey Oswald shot and killed the President on November 22, 1963, in Dallas, Texas. However, he was shot and killed two days later, before a trial could take place. Since then, there have been a number of wild conspiracy theories over the President's death. Here, Mirror Online takes a look at the top ten conspiracy theories. 1) Deaths of witnesses Since the death of John F Kennedy, there have been a number of theories that witnesses to the shooting died suspiciously. The 1973 film Executive Action brought the issue to national attention and proved hugely controversial. Journalist Jim Marrs later presented a list of 103 people he believed died "convenient deaths" under suspect circumstances. 2) The Soviet Union did it At the time of JKF's death, relations between the Soviet Union and US were extremely low, with both sides suspicious of each other. 3) The Mafia shot JFK Getty Rex.

Kennedy Assassination. November 22, 1963, was a sunny day in Dallas, Texas, and for this reason the convertible Presidential limousine went through the afternoon parade with the top down. 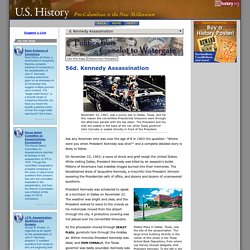 The President and his wife are seated in the back of the car, while Texas governor John Connally is seated directly in front of the President. Ask any American who was over the age of 8 in 1963 the question: "Where were you when President Kennedy was shot? " and a complete detailed story is likely to follow. Books in the library. Youtube Primary sources. Epic databases - please ask a librarian or Mr Taylor. Kia ora and welcome to EPIC. 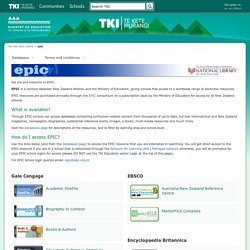 EPIC is a venture between New Zealand libraries and the Ministry of Education, giving schools free access to a worldwide range of electronic resources. EPIC resources are purchased annually through the EPIC consortium on a subscription basis by the Ministry of Education for access by all New Zealand schools. What is available? Through EPIC schools can access databases containing curriculum related content from thousands of up-to-date, full text international and New Zealand magazines, newspapers, biographies, substantial reference works, images, e-books, multi-media resources and much more. Visit the Databases page for descriptions of the resources, and to filter by learning area and school level. How do I access EPIC? Use the links below (and from the Databases page) to access the EPIC resource that you are interested in searching. For EPIC school login queries email: epic@epic.org.nz Who can use EPIC? Where can I find more information? JFK Assassination : Who Killed President Kennedy?

John F. Kennedy assassinated - Nov 22, 1963. John Fitzgerald Kennedy, the 35th president of the United States, is assassinated while traveling through Dallas, Texas, in an open-top convertible. 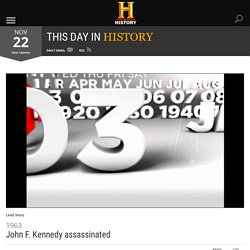 First lady Jacqueline Kennedy rarely accompanied her husband on political outings, but she was beside him, along with Texas Governor John Connally and his wife, for a 10-mile motorcade through the streets of downtown Dallas on November 22. Sitting in a Lincoln convertible, the Kennedys and Connallys waved at the large and enthusiastic crowds gathered along the parade route. As their vehicle passed the Texas School Book Depository Building at 12:30 p.m., Lee Harvey Oswald allegedly fired three shots from the sixth floor, fatally wounding President Kennedy and seriously injuring Governor Connally. Kennedy was pronounced dead 30 minutes later at Dallas’ Parkland Hospital. 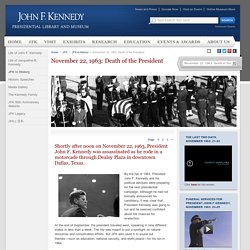 Kennedy was assassinated as he rode in a motorcade through Dealey Plaza in downtown Dallas, Texas. By the fall of 1963, President John F. Kennedy and his political advisers were preparing for the next presidential campaign. Although he had not formally announced his candidacy, it was clear that President Kennedy was going to run and he seemed confident about his chances for re-election.